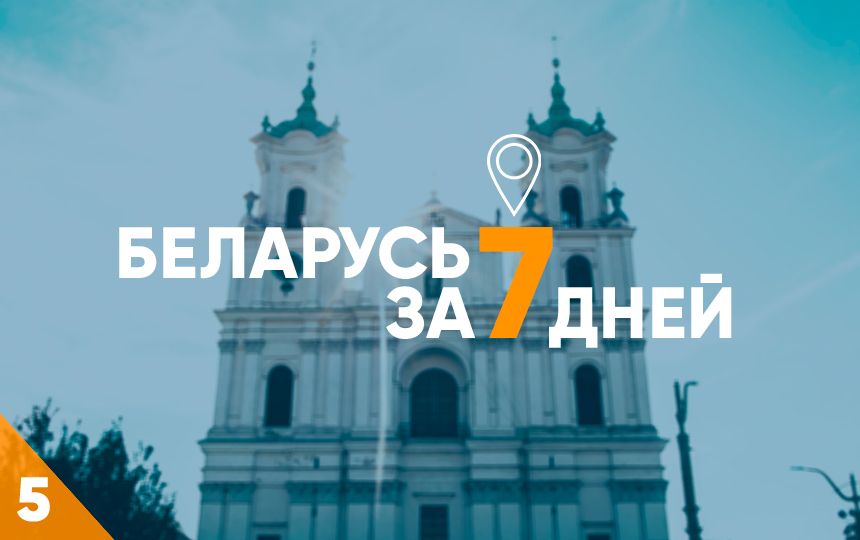 Our expedition continues. We have already submitted to Mogilev, Vitebsk, Polotsk and Braslav, Naroch and churches. Meet and greet Beautiful castles of Belarus, the Augustow Canal, a UNESCO heritage, craft beer, a real lamplighter and our journey around Belarus!

Grodno: the city of royal palaces and temples

When we came to Grodno, we immediately raided the sights. Our first victim was the Lutheran Kirche.

Kirche was built in 1793 instead of the tavern.

We’ve met a Kirche in Polotsk, which no longer fulfills its direct function (in contrast to the Grodno sightseeing). Lutherans were invited to Grodno to open manufactories in 1783. The community was given a tavern building, which, as a result, was turned into a temple.

Advice from VETLIVA: if you want to know what to see in Grodno on your own, use our guide to the royal city!

The Old castle appeared in Grodno in 1398.

What a beatiful view! Just imagine how cool your panoramic photos will be!

What else to see in Grodno? Near the castles there is another local attraction — a fire station. The building houses a museum with huge amount of retro photographs.

The main altar of the Farny Church is one of the highest in Europe (21 m).

What to see in Grodno in one day if you are limited in time just like us? The unequivocal answer will be “the Farny Church”. This attraction of Grodno replenishes the list of the best churches in Belarus deservedly. We were fortunate enough to get into the church during the morning service, and we took this opportunity to see a grandiose altar with 40 sculptures on it. The service was conducted in Polish.

An interesting fact from VETLIVA: unlike the rules adopted in Orthodox churches, there is no strict dress code. You can go in in any clothes and without hats.

We did not shoot inside, so as not to interfere with everyone else. Inspired by the atmosphere, we left the temple and went to the next point of the route.

Augustow Canal: how we found a new friend

The Augustow Canal is one of 3 canals of a similar scale in the world.

There is a unique place in Belarus 60 km from Grodno and its attractions. The Augustow Canal, where we kept our way, is one of the 3 structures of this scale in the world. It was built to unite the Neman with the Visla and open the way to the Black and Baltic Seas. However, the canal practically did not fulfill the navigable function, but it managed to cheer with the tourist (the places where it flows, are very picturesque).

However, we were surprised in such a popular tourist destination there was nobody but a small dog. With a light hand, we immediately called it Friend. Perhaps that is why Friend accompanied us throughout the walk through incredibly picturesque places near the gateway Nemnovo.

The Nemnovo gateway is the longest on the Augustow Canal.

The gateway Nemnovo was recently restored, so walking around its surroundings is such a pleasure!

Recall that even at the beginning of our trip to Belarus it was snowing, it was cool and cloudy. And just look how the weather has changed by the fifth day!

During the trip around Belarus, it seemed to us that dandelion fields can easily be called a visiting card of the Grodno region. They found themselves everywhere and just ask for a shot!

Mir Castle — the residence of the Radziwills, erected in 1527. Gothic.

Mir Castle does not need to be introduced: we included it in the top sights of Belarus and talked about its secrets twice: here and there.

Mir Castle is always popular with most tourists traveling to Belarus. We met the Chinese delegation. Having decided to demonstrate our knowledge of Chinese, we greeted one of the tourists. After the words “Nihao, mei!” (“Hello, beauty!”) she was embarrassed and went on with a smile.

It was time to refresh ourselves, and we went to the Mirum cafe near the castle. Delicious Belarusian dishes are prepared here (by the way, we like to eat tasty food, especially pancakes and heathers, so we invite you to a gastrotour around Belarus.

Advice from VETLIVA: if you like music festivals, one of the largest is held annually in the World. So you can combine a visit to the Mirum festival with an excursion to Mir Castle.

The palace and park ensemble is a gem of Belarusian architecture.

So, it is time to introduce you to one of the main attractions. The answer to the question “What to see in Belarus?” almost always contains the name of the Nesvizh residence of the Radziwills. Comments here, as they say, are superfluous: Nesvizh Palace is beautiful at any time of the year.

The majestic building is perfectly restored, in addition, a lot of attention is paid to the infrastructure around. This is done so that foreigners can travel comfortably and study the architectural heritage of Belarus. Incidentally, we were previously lucky to stay right in the castle. Impressions of such an overnight stay are simply unforgettable!

It was time to move on. We booked accommodation in Brest and hit the road again.

Advice from VETLIVA: if you decide to repeat our route, a selection of the best accommodation offers will come in handy.

Having reached Brest and settled in the apartments, we felt that it was time to restore strength. Local guys all, as one, advised us...a bar called Korova (it’s Russian for “cow”). Well, we decided to take advantage of their offer and went to this grill bar. Great craft beer is brewed here and sumptuous steaks are prepared, so we were not disappointed and we recommend this place to anyone who goes on an excursion to Brest.

In the end, the day prepared for us the coolest impression. On a pedestrian street, we met the lamplighter who lights and extinguishes lights daily. All by hand, as in the good old days. The atmosphere at the same time reigns truly fabulous and romantic.

The lamplighter lit the last lantern and left, and we went to sleep.

Anyone who will be with us until the end is sure to ask: what will happen tomorrow? We answer: of course, even more cool and interesting! The Brest Fortress, the Belarusian Versailles, a castle, whose owners held a hand lion, and the real Belarusian swamps — do not switch from the VETLIVA vibe!