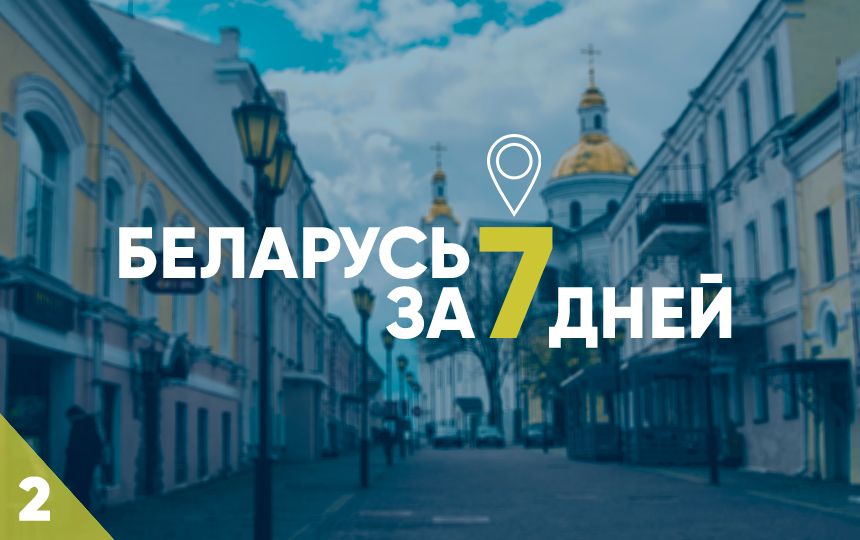 So, the first day has passed, and on the way we have even more interesting locations. A small spoiler to our traveling in Belarus:

Are you intrigued? Then let's go!

The second day of our trip to Belarus by car fell on a great holiday — May 9. It so happened that we had a chance to meet him not far from Buinichsky field. Everything around was decorated, a motorcade consisting of Soviet cars drove past us. Therefore, we decided to pay tribute to the memorial and went to see it.

In the area of the Buinichsky field, a 23-day front defense was held during the Second World War.

However, the village of Buinichi is known not only for its monument. There is an extensive ethnographic complex here.

Lifehack from VETLIVA: a tour to Buinichi gives a unique opportunity not only to touch the history, but also to see the real bison! This is a great opportunity for those who have not been to Belovezhskaya Pushcha.

Buinichi Zoo is really huge! Having bought tickets and going for a walk, the first thing we were surprised at was how spacious the animal enclosures were. Roe deers and mountain goats jumped and frolic as they pleased, and we were lucky to see the bear very close. By the way, we have never once seen clubfoot close by, so even a young bear seemed really big to us!

The moose was not particularly afraid of us and continued to scratch his hip on the fence. Nearby there were enclosures with wolves and hares.

It was cold in the morning, so we decided not to hesitate and went to the wisents. It is a pity that they failed to photograph the mighty handsome men closer: the train, which runs through the territory of the zoo and allows you to examine animals closer, has not yet worked. However, we still managed to capture the symbol of Belarus.

It was time to go on.

Answering your question “What to see in Belarus by car?” we will talk about the village of Polykovichi and its two iconic sights. About half an hour drive in the direction from Mogilev to Vitebsk — and you are there. Drive along the main country road, at the end of which turn right. By the way, if on the way you meet a small shaggy dog — say hello to him from us!

Around the bend you will find the Temple of the Holy Trinity.

The Temple of the Holy Trinity keeps the healing spring: it is located on its territory.

An interesting fact from VETLIVA: in Belarus there are many beautiful Orthodox and Catholic churches. All these amazing buildings are the real Magnum Opus of our country.

The spring of healing water is located directly on the territory of the temple. Even a separate building with a font for children was erected here. We did not look for easy ways and decided to rise to the headspring.

However, our plans were not destined to come true. It was raining in the morning, so it was very slippery to climb. The weather was still cloudy, but the sun was already beginning to peep through the clouds.

The spring originates on the hill. This place is unusually beautiful and very quiet: just what the city dweller needs. The water in it is considered healing, so we decided to take a little with ourselves. By itself, it is very clean and tasty, almost sweet. We did not want to leave the picturesque place! But Vitebsk itself wouldn’t wait, so we regretfully set off again.

Vitebsk: the city of the Slavic Bazaar and beautiful temples

On the way to Vitebsk there was almost a state of emergency: our car began to make strange sounds. Our trip to Belarus could end on the second day, but in fact the breakdown was not serious: the protection at the bottom of the car fell off. We were ready for this. Quickly correcting the shortcomings, we hit the road again.

The first thing that catches your eye in Vitebsk is space. The regional center has more similarities with the capital than with Mogilev and even the second largest city of Belarus, Gomel. The center’s infrastructure is styled for the Russians: when we were looking for where to eat, we had to confine ourselves to sandwiches. The canteens had not yet worked, and a portion of draniki would cost us 16 BYN in the local cafe!

Advice from VETLIVA: if you want to try dishes of national cuisine, including pancakes, at a reasonable price, use our gastrotour in Belarus.

The memorial complex "Three bayonets" is a monument to the victims of the Second World War.

Your travel route to the Republic of Belarus should include Vitebsk. If everything you know about it is connected with the Slavic Bazaar, then our guide on the sights of Vitebsk and its environs will come in handy.

Acquaintance with the sights of Vitebsk begins with the Three Bayonets memorial complex, which was dubbed the Trident of War. Unlike many other cities, interesting places are at an impressive distance from each other here. We were going to spend the night in Polotsk and took care of living in advance (by the way, if you are suddenly planning to spend the night in Vitebsk, our selection of suitable lodging will come in handy). Therefore, we will briefly tell and show what we managed to shoot, walking around the city.

The church of Alexander Nevsky is one of the smallest in Belarus.

The church of Alexander Nevsky is like a matchhouse not only because it was built of wood. It is also very tiny, and this effect is enhanced by the high-rise buildings towering around it. It is really unusual to see a wooden church in the modern hub of the city.

An interesting fact from VETLIVA: we already included the temple in the top 50 sights of Minsk. So if you happen to visit Minsk — be sure to see the Holy Trinity Church.

Assumption Cathedral is located at the highest point of the city.

The snow-white Assumption Cathedral must be included in the list of what to see in Vitebsk on your own. From the hill on which it is located, all the iconic sights of Vitebsk are visible (including the Summer Amphitheater, one of the main venues where the Slavic Bazaar takes place annually). Even cloudy and cold weather did not stop us from taking gorgeous panoramic shots!

You can get into the cathedral at any time, however, contrary to expectations, inside it is not as high as it seems. This is because a semi-basement is open for visitors, which we visited. We tried to capture its beauty from the inside, but nothing came of it: it was too dark.

There is another way to the cathedral, from the direction of the Vitebsk Drama Theater. However, be prepared that you have to overcome the stairs with a huge number of steps.

Almost every resident participated in the construction of the Resurrection Church.

What else to see in Vitebsk in 1 day? We answer: one more magnificent temple. The Resurrection Church was built in due time, we might say, by the whole world, and now it is considered truly popular. We were fortunate enough to visit it inside, but to capture the delightful blue vault, which distinguishes it from other temples, did not work: we were forbidden to take pictures.

Monument to Prince Olgerd, who greatly expanded the boundaries of the Grand Duchy of Lithuania.

Near the Resurrection Church you will see:

Lifehack from VETLIVA: if you cross the road from the Olgerd’s monument, you can catch three sights of Vitebsk in the camera or smartphone lens: the town hall, the Resurrection Church and the Assumption Cathedral.

And we had to round off. Suddenly there was a call from Polotsk: the hostel administrator wanted to clarify what time to wait for us. We hit the road.

Do not forget that tomorrow there will be many more interesting things! The patriarch of the Belarusian lands, May snow and Braslav lakes were waiting for us (and you) ahead!