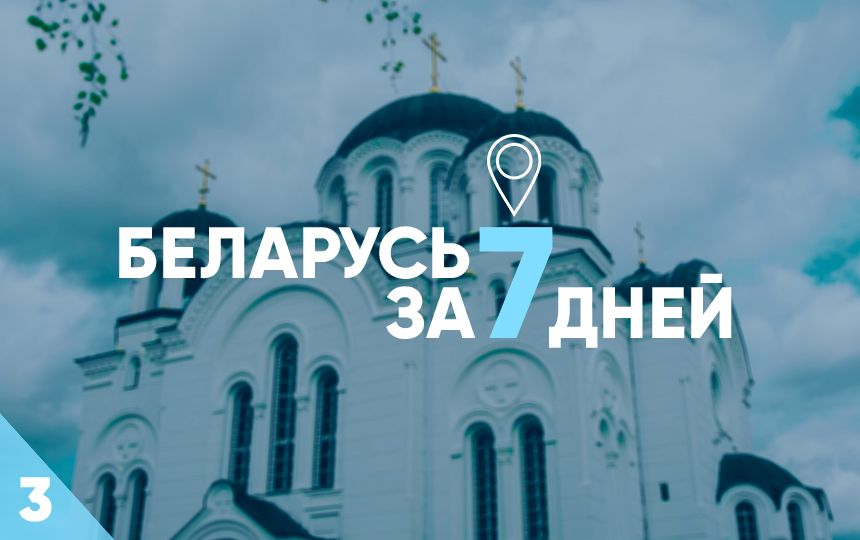 Out trip around the blue-eyes country began on May 8. We were lucky to celebrate the great Victory Day on May 9 on the second day of our trip to Belarus in the memorial place of the Great Patriotic War — on Buinichsky field. By tradition, a small spoiler of what lies ahead of us (and you):

What to see in Polotsk?

So, the third day of our expedition came, and we met it in Polotsk. This is the real patriarch of the cities of Belarus: for the first time he is mentioned in written sources back in 862!

As we have already mentioned, our team spent the night in a Polotsk hostel (this, by the way, is one of the cheapest accommodation options in any city in Belarus). It is unfortunate that we did not have neighbors: I really wanted to ask someone about the sights of Polotsk! We ate, warmed up, loaded our things into the car and hit the road.

St. Sophia Cathedral is an exact copy of the Byzantine temple of the same name.

If you have heard about Polotsk, then you probably associate it with St. Sophia Cathedral, which we absolutely rightly included in the top churches of Belarus. It was 9 o’clock in the morning, and we went on an acquaintance with the key attraction of Polotsk in Belarus. The temple is located on the picturesque bank of Western Dvina, and there is a small spring up ahead. The water in it is so soft and tasty, as if sugar had been dissolved in it!

Some interesting facts about St. Sophia Cathedral in Polotsk:

We could not get inside the temple: it opens only at 10 a.m. It is a pity that it was not possible to see the majestic organ, thanks to which the large-scale festival of organ music “Zvany Safii” is annually held in Polotsk (by the way, organists from Japan even come to it!). But there is the majestic Borisov stone nearby.

In Belarus, only two Kirche remained. The Polotsk temple was erected in 1888.

Then we continued our trip around Belarus on foot. We parked the car and went to Pokrovskaya street, where many of Polotsk's attractions are concentrated.

The Epiphany Church first opened its doors in the distant 1777.

A little further down the street there is the Epiphany Church. It was built at the Epiphany Monastery, which appeared in Polotsk long before the construction of the church, back in 1653. There is also the Polotsk Museum of Book-printing.

An interesting fact from VETLIVA: most of the churches voluntarily-forcibly converted to Uniate after the conclusion of the Union of Berestey, while the Epiphany Monastery remained faithful to Orthodoxy.

In 5 km from the monastery there is another iconic attraction of Polotsk — Spaso-Evfrosinievsky monastery. It was not only founded by the famous Euphrosyne Polotskaya, but also preserves its holy relics. This is not just a separate monastery, but a whole complex of temples, a must-see for every tourist.

VETLIVA recalls: since this is a functioning monastery, girls should not forget about the proper appearance. Be sure to bring scarves and bedspreads with you, otherwise you won’t get inside!

Despite the weather, we managed to take a lot of cool photos. The monastery is well preserved. Nuns are living here constantly and services are being held, so not all places you can get to. But even where they let you go, there is an extraordinary sense of peace and tranquility.

An interesting fact from VETLIVA: once in this monastery the famous relic was stored — a precious cross made by the master Lazar Bohshey for Euphrosyne of Polotsk. After World War II, the relic disappeared without a trace... By the way, during the many wars that flew through the lands of Belarus, many princely treasures and treasures disappeared (you can still try your luck in Mir and Nesvizh, looking for 12 gold apostles and other Radziwill treasures).

It was time for us to continue our journey through the cities of Belarus. Leaving Polotsk, almost immediately we were faced with difficulty.

It’s an unusually pastoral landscape, isn't it? That's just the Burenki blocked our path. After some time, we were finally able to continue the journey.

The weather continued to be weird.

No, this is not the breath of a volcano sleeping underground, but the evaporation of snow.

We wanted to exclaim: “Does May even know that it is spring?”. However, compared with what awaited us ahead, these were still flowers.

On the way to the waterfalls, we discovered a temple of amazing beauty — The Church of the Our Scapular Lady. We were not lucky today: it was also closed. However, a few minutes later a priest came out and offered to conduct an excursion. We were surprised and immediately agreed with joy.

The Church of the Our Scapular Lady — the only church in the Art Nouveau style.

The temple looks very unusual thanks to the combination of yellow brick and rubble stone. It was erected in the period from 1937 to 1939. In such difficult times, a temple was erected on the territory of the village — as a hope for parishioners for the best, as a symbol of faith. The church continues to serve its parishioners today. Masses are held here, people gather, as they did a few decades ago.

It was the priests who told us where to go next. In the village of Druya, he advised me to see another Catholic church and said that we would be treated to coffee and an interesting story there. This is what happened as a result.

Druya village: a snow-white church, a panorama of Latvia and a cemetery

Having traveled 11 km that separate Idolto from Druya, we went to see the Trinity Church.

Trinity Church was part of the Bernardine Monastery, which appeared in 1643.

An interesting fact from VETLIVA: Trinity Church in the village of Druya was repeatedly destroyed during fires, the latter occurred in 1944 due to...aerial bombs.

As the priests from Idolto advised us, we turned to the nuns from the building opposite. They called a 70-year-old ringer, who told us the story about the shell that charred the walls of the temple, and about the war, and about the post-war period. According to him, it all started “from the seventh heaven”, because it is the belfry of the church that is the highest point of the village of Druya. A breathtaking panorama of Latvia opens from here.

Thanking the old ringer for the story, we set off on. At the exit of the village of Druya there is another attraction that we recommend to see when traveling around Belarus by car. This is an old Jewish cemetery that does not look ominous, but rather strikes with accuracy and plenty of greenery.

The Jewish cemetery is the only one in the country with color paintings on the monuments.

On the way to the last point of our travel route in Belarus, we were covered by a real snowstorm! It all looked fantastic.

The road was completely absent: we had to do a few laps before we found the right direction. After 40 minutes, we finally reached a small village called Prudniki.

Neat multi-colored houses without fences are right next to the road... Horses graze in the meadows... A true pastoral landscape.

Waterfalls are located about one kilometer from the border with Latvia. So if you are planning an independent trip — do not forget to bring your documents with you (you never know). Of course, you will not see Niagara here, but Vyatka waterfalls still look very bizarre and unusual, and they ask for a lens.

And tomorrow you will see such landscapes... in our opinion, it is difficult to come up with a more attractive spoiler!

Do not switch from the inspiring wave of VETLIVA!