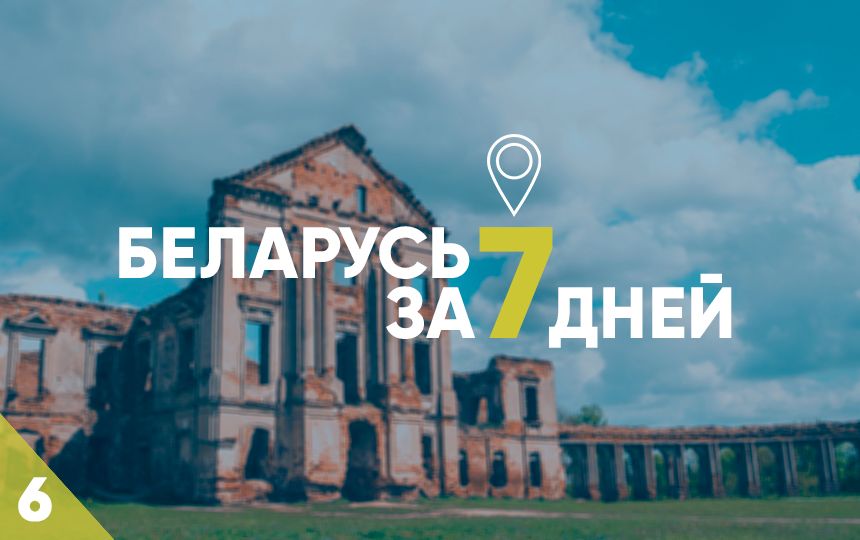 Our epic journey around Belarus is coming to the end. Today is the penultimate day on the road, and you will see with us:

Well, for those who missed the previous five days of our trip (sacrilege, comrades!), here are the links to the first, second, third, fourth and fifth days.

And we are driving on.

Brest Fortress: the monastery of courage and glory

One of the coolest sensations when traveling around the cities of Belarus is when you wake up in a new place. You are in anticipation of new emotions, and it energizes you very much. Of course, by day 6 we’ve already been a little tired, but compared to the impressions that the journey gives, it’s nothing.

Brest Fortress is one of the most famous memorial complexes in Belarus.

We woke up, had a snack in a nearby cafe and went off to click cameras without wasting a minute.

Kholm gate preserved traces of bullets and shells. It’s a symbol of the complex.

The complex is well monitored, it is constantly being restored and protected from destruction. As always, there were a lot of tourists here. But the VETLIVA team is ready to share the life hack with those who like privacy: behind the fortress, if you take a little to the right of the main entrance, there is an unusually beautiful place where Bug and Mukhavets unite together.

The photograph clearly shows where one river ends and another begins.

Be sure to take our advice when going on an excursion to the Brest Fortress. By the way, this will also give a chance to see the sights of Brest from the other side.

On the territory of the Brest Fortress, there are several interesting museums in addition to all the famous monuments. We did not have much time (it was planned a lot of what to see in Brest), so we taxied only to the Berestye Museum.

In the unique museum "Berestye" the remains of the 13th century Brest detinets are presented.

Time was running out, there were many more sights of Brest and the environs that we wanted to see. Our journey around Belarus continued. We went towards the castles and swamps, to the penultimate point in our route — the city of Mozyr.

Ruzhany Palace: inspired by the greatness of the Belarusian Versailles

The Ruzhany Palace is considered the hallmark of Belarusian architecture of the 18th century.

We arrived in Ruzhany. Unfortunately, now the magnificent complex that once belonged to the Sapieha family and earned its nickname "Belarusian Versailles" is only ruins. And its greatness and scope is still visible to the naked eye. The palace, like many other attractions, was destroyed during the Great Patriotic War.

Lifehack from VETLIVA: local children run around the palace. They will take you on an excursion for a couple of kopecks, show old stucco moldings, cellars where there once was an explosion, and fireplaces. Do not forget to bring a flashlight with you and be careful: the masonry crumbles in some places.

The ruhma of the Ruzhany Palace has been restored, it houses a museum.

Kossovo village: 12-tower palace and the homeland of Tadeusz Kosciuszko

The castle is located a few kilometers from Ruzhany.

There is a legend that there was an underground passage between the Ruzhansky and Kossovsky castles. And in general, many legends go about the Puslovskie’s castle. Like, they also let out a tame lion there at night, and fish under the floor in one of the halls swam, and there was a musical staircase in the castle. Which of this is true, and which are just rumors, you can find out for yourself by going on a trip around Belarus by car in our footsteps.

After the Ruzhany Palace, this one is no longer so impressive, but it is still very beautiful. There used to be a park in front of the castle, but unfortunately over time there was nothing left of it but a single coniferous tree.

But if you stand back to the Puslovskie’s castle, you will see another interesting attraction of Belarus.

The Puslovskie were very proud of the proximity to the birthplace of Tadeusz Kosciuszko.

This log house is the estate where Tadeusz Kosciuszko was born. It is located on the shore of a large lake, which offers an excellent panorama.

Lifehack from VETLIVA: do you want to capture two sights on the photo at once? Move a little further away, and then the manor and the castle enter the frame together.

On February 12, 1746, Tadeusz Kosciuszko was baptized in the Trinity Church.

On the way, we were lucky to go inside another sight of Kossovo. The future revolutionary and national hero Tadeusz Kosciuszko was baptized under the arches of the Trinity Church.

This photo answers the question of what to see in Belarus by car. Just look what a beauty! It was a sin not to stop and not to make a couple of dozen simply gorgeous shots.

Olmanskie swamps have survived to our time in pristine condition.

And now it's time to talk about the most vivid impression of the day. The nature of Belarus never ceases to amaze! Olmanskie swamps — the largest complex of upland, transitional and lowland swamps in Europe. But at the same time, they are also incredibly beautiful. And we were here in complete solitude. Silence and relaxation: such a feeling in the city, perhaps, is impossible to experience.

It’s easy to move through swamps: special paths are laid here. After 2 kilometers, we found a place where you would definitely want to stay a month or two (especially if you are an avid fisherman and/or outdoor enthusiast).

A beautiful lake in front of us lies. The water shade was amazing, almost like sea blue. A fresh wind was blowing, and we no longer wanted to go anywhere... After spending half an hour here, we regretfully packed up and returned to the car. It was time to move on.

Turov: cross growing out of the ground

According to a legend, stone crosses sailed to Turov along the river against the current.

Riding past one of the oldest cities in Belarus and not dropping into it for a moment was higher than our strength. Moreover, in Turov there is a real wonder of the world: a stone cross, which itself grows out of the ground.

Having admired and photographed the local relic, we went to the final destination of our current route. As planned, we arrived at the place of overnight at sunset.

The final is near! Tomorrow we will drink mead (and tell us where to buy it) and see the Rumyantsev-Paskevich residence. If you are waiting for our end of the circumnavigation, it remains to wait quite a bit. Tomorrow it will end in Gomel.