The Monument to Pushkin in Minsk

The Monument to Pushkin in Minsk 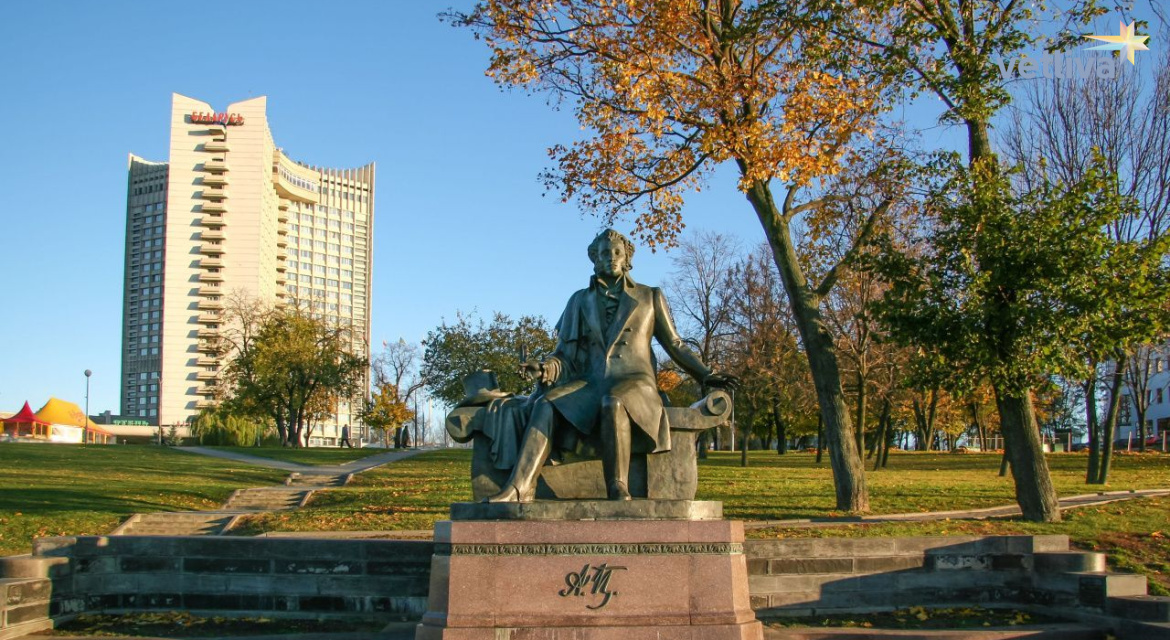 To the monument to Pushkin

Minsk always has some surprises for its tourists. One of such surprises is the monument to A.S.Pushkin. Though it is placed in the center of Minsk, but not all tourists can easily find it.

The gift of the city administration

This is all a good deal simple: you just need to walk along the Svislach river embankment from the Trinity Hill to the Palace of Sports. The monument to the Russian genius in the Belarusian capital was installed on 10 July 1999. The opening date was timed to coincide with the 200th anniversary of the poet’s birth. The Moscow city administration presented the monument to Minsk. The authors are Orehovs Grigory and Yury.

A.S.Pushkin immortalized his name in literature with numerous excellent works that we all know since our childhood. The genius of the great poet is known not only in Russia, but far abroad. Pushkin is a recognizable figure all over the world. It is not by chance that near the monument in Minsk there are always flowers, on the poet’s birthday a lot of lovers of his creation meet at the monument. On the river embankment one can hear unforgettable lines from the poet’s numerous poems and prose works. A great number of dedications to the poet  is another evidence of the fact that Pushkin is still kept in memory and hearts of adults and children.

The image of Pushkin

The bronze sculpture depits Pushkin sitting on the bench. He as though sat to rest falling in a muse. We see Pushkin with a quill in the hand and with a top hat – the poet’s constant companion – next to him. You will agree that there is hardly even more recognisable poet than Pushkin. Millions of schoolchildren all over the world heartily learn the creative work of the Russian genius. And, no doubt, everyone memorized the images of the great poet through reading his works.

Pushkin’s name became a generic term; he is still the subject of legends. A lot of towns, streets, universities and libraries are named in his honour.

The traditions of newly-weds

The poet’s image still inspires millions of people. So, the monument to A.S.Pushkin in Minsk is visited by fans of the poet, tourists and also newly-weds. This is not by chance as Pushkin is known for his romantic mood, gyniolatry, remarkable sensitivity. Besides, in the square near the monument there are lots of benches, on which one can sit, rest and admire the great Russian poet and the magnificent prospects of the Belarusian capital.

Other monuments to Pushkin

There are monuments to Pushkin in other Belarusian towns. So you can plan the meating with the Russian poet going to Vitebsk, Mogilev, Gomel or Bobruysk. The monument squares are especially full on 6 June, on the poet’s birthday. With some luck, you will be able to get there on that day in one of the Belarusian towns. You will be surrounded by numerous Pushkin’s fans, you will hear lines from the poet’s famous works, will be able to quote your favourite phrases from his poems or prose works.

But all the same the most atmospherical monument to Pushkin is in Minsk. In the Belarusian capital it meets lots of tourists and stares dreamily from the hill.