The monument to the letter “Ў” in Polotsk

The monument to the letter “Ў” in Polotsk 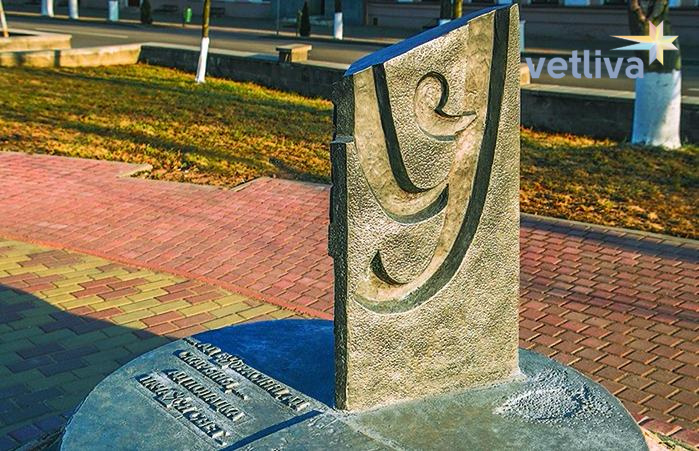 The monument to the letter “Ў” was erected in Polotsk in September 2003, in the tenth anniversary of the national holiday “The Day of Belarusian written language”. This sculptural structure is unique in terms of the concept and way of creation. It is worth noting that in the world there is not another object of this kind, which according to its author's intention and peculiarities of its implementation would be very similar to this sculpture.

As this alphabetic character is a distinctive feature of the Belarusian language, over time it became a symbol of the whole country. According to some art historians this unusual graphic object reflects the specificity of national traditions, uniqueness of historical and cultural ways of the people. It is also emphasized with a creative approach to the compositional design of the whole object, where the image non-syllabic “У” is found several times.

How does the monument to the letter “Ў” look?

From 2003 to 2016 on the granite base of the monument there was a round plate with a carved symbol, an enumeration of the alphabet in the right part and a quote from the works of Gregory Borodulin in the left part. The sides of the stele represent the image of the appearance of the letter, determine its place in the Belarusian alphabet, as well as demonstrate the most frequently used words with this graphic element.

In 2014 the construction was seriously damaged because of changeable weather conditions. According to some information it was the result of hooligan actions of a group of citizens. As the local historian A. Bukovetsky noted by September 1 of the current year the construction had completely been restored but it had received a new look.

The authorship of the restored object belongs to the main city artist I.Kurzhalov who was also involved in the creation of the initial sculptural image. Means for the restoration were allocated by representatives of the city authorities, that explains the special cultural significance of this artwork for Polotsk, the region and the whole country as well.

Many external features have been preserved, however, the monument to the letter “Ў” has changed a lot. Nowadays the quote of G.I.Borodulin, that earlier adorned the left side of the round horizontal plate, has been transferred to the lateral face with the name of its author. Now inside the letter “C” one can see the symbol-signet of F.Skorina. The symbol consists of the moon and sun overlapping each other.

In spite of the fact that another side has preserved the outline of the non-syllabic “У”, but its size became smaller and the style of writing became italic. Above it there are Belarusian words including this letter; among them are “teacher”, “Euphrosyne”, “dictionary”, “Braslav”, “verb” and some others.

It is necessary to note that the new composition looks more successfully in comparison with the initial version. The simple performance of the round plate is compensated for the informational and artistic richness of the stele, at which unwittingly gazes an observer.

How was the opening of the new monument held?

This event engraved on the memory of Polotsk residents and guests of the city for a long time. On September 1 here was held an open lesson, after which came the turn of a theatrical performance. t should be noted that the reconstruction of the object took 8000 denominated rubles from the local budget and donations from charitable accounts.The construction is interesting not only for Belarusian but also for foreign tourists who write numerous admiring comments about it on Internet portals.