Monument to Aloise Pashkevich in Shchuchin

Monument to Aloise Pashkevich in Shchuchin 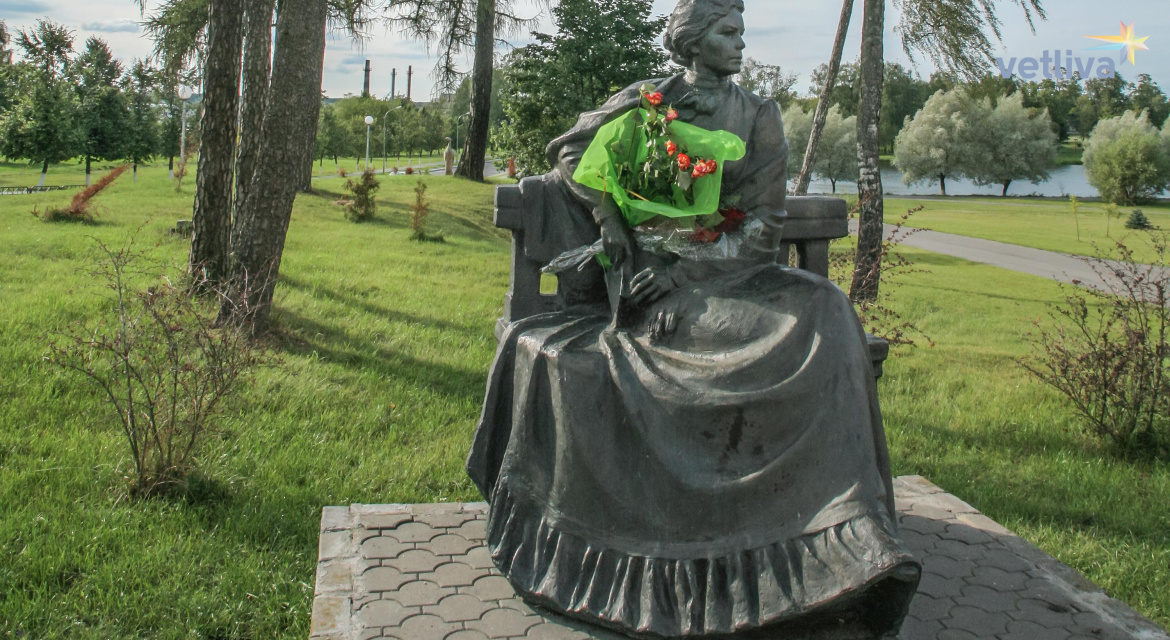 Yakub Kolas, Yanka Kupala, Adam Mitskevich, Frantishek Bogushevich, Ivan Shamyakin… This pleiad of the greatest Belarusian writers should be added with another one of the founders of national Belarusian prose Aloiza Pashkevich, also known under the pseudonym of Tyotka. She is one of the most outstanding literary figures. In addition, she was also an actress, teacher, prose-writer and even a doctor. A monument to Aloiza Pashkevich was set in the small village of Shchuchin of Grodno region for her invaluable contribution to the development of culture and art of Belarus.

Especially for this here has been invited the talented Grodno sculptor Ales Lipen who is also the autor of the portraits of Kupala, Bogushevich, Kolas and Bogdanovich. This famous sculptor differs from others in the fact that he gives special expressiveness to his work, carefully working through every detail and thoroughly depicting all the lines. Of course, the monument to Pashkevich in Shchuchin is made in the same way. Annually, literary evenings and lessons of poetry and literature are held near the monument.

Aloiza Pashkevich was born in a family of Polish gentry. In the early 20th century, the girl went to St. Petersburg to study at courses for teachers and supervisors of physical education, however, Aloiza did not graduate them. As a result, in 1904, she got a job as a medical assistant in a hospital not far from Vilnius, and she began to actively engage in propagandistic work at the same time. Before the Belarusian socialist community was expelled from the Russian Empire under the threat of arrest of all its members, Pashkevich had held a community leadership position. Aloiza also communicated with Lithuanian and Russian representatives of social-democratic environment. Allies of Vladimir Ilyich Lenin were among her companions.

Aloiza Pashkevich was the wife of Deputy Prime Minister of the Proclaimed Lithuanian Republic Steponas Kairys. However, there were rumors that the marriage was just a sham because Kairys did not accept the Communists. And Pashkevich was one of them, by the way. At the same time, Pashkevich participated in circles of creative people of Poland and Lithuania. The classic of Polish literature Eliza Ozheshko, the Lithuanian writer Yonas Bilyunas, the Ukrainian art historian Ilarion Sventsitsky, and many others were among her friends.

During her emigration, Aloiza studied at Cracow and Lvov universities, and actively traveled and studied philosophy and history. A little later, Pashkevich remarried, changed her name and moved to live in Belarus. Then she began to play in the theater of Ignat Buynitsky and to edit the magazine “Luchynka”. When the World War I began, Pashkevich became a Sister of Charity in a military hospital in Vilnius. Unfortunately, a trouble came in 1916. Having gone to her father's funeral, Aloiza contracted typhus and soon died. Pashkevich was only forty years old.

Love for her homeland and rejection of the oppression of ordinary people are vividly felt in all her works. Pashkevich also wrote children's prose; now many Belarusians are enjoy reading it to their children. The immortal works belong to the talent of the writer, they, undoubtedly, are considered classics of Belarusian literature. That is why the most beautiful monument to such a talented person as Aloiza Pashkevich was set in Shchuchino, at her small home.