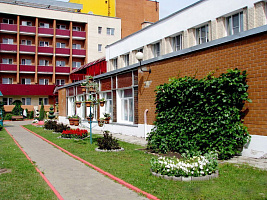 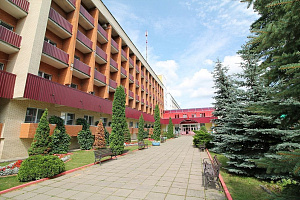 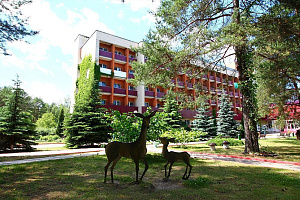 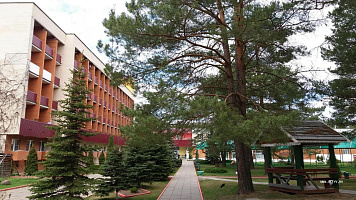 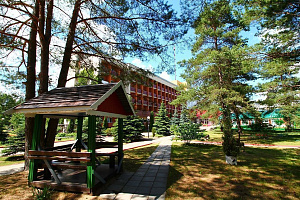 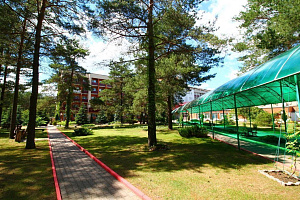 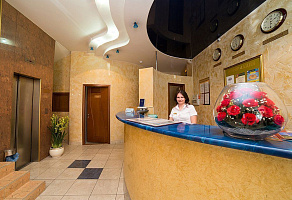 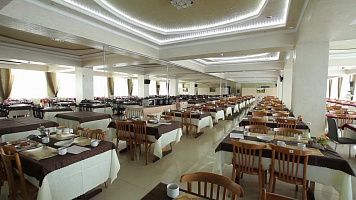 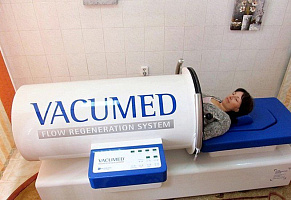 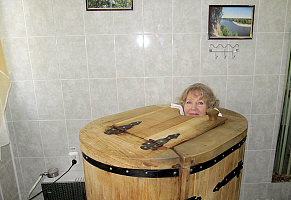 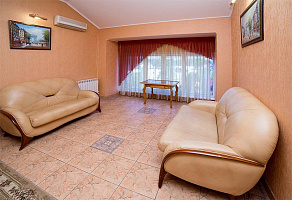 Health and spa resort "Pridneprovsky" is a balneological and climatic resort of the Republic of Belarus, located 12 km from Rogachev, 121 km north-west of Gomel on the left bank of the beautiful Dnipro in a mixed forest.

The resort consists of 3 buildings with 850 beds and two pools. Transitions between buildings are absent.

Children are accepted to the main place from 3 years, treatment is provided from 6 years.

Vouchers with treatment can be booked from 6 days.

Children are accepted from 3 years, for treatment from 6 years.
The following services are available for children:

There are 2 dining rooms for catering in the health resort:

For Sports and recreation guests of the health resort can use the following services:

When you check you should have:

Upon arrival at the cash desk of the health resort, the resort fee is paid:

It is convenient to get to us - in the immediate vicinity of the sanatorium is the international highway Brest-Krichev-Smolensk-Moscow.

From the central station of Minsk the bus which follows on the route (sanatorium is located in 1 km from the route): Minsk-Kostyukovichi departs,  and with arrival in sanatorium there are routes of buses Minsk-Korma, Minsk-Chechersk which also depart from the central station. Minsk. Arriving at the station. Rogachev can be transferred to a passing bus,   which  will take you to the resort.

From Gomel we can be reached by minibus Gomel-Rogachev, the daily route of which passes through the sanatorium, as well as by suburban train Gomel-Rogachev, Gomel-Mogilev.

The routes of the following buses pass through Rogachev on the route in the direction of the sanatorium: Svetlogorsk-Moscow, Bobruisk-Moscow, Zhlobin-Chechersk.

Every day from Rogachev from the railway station at 7:40, 8:15 the bus of sanatorium departs (for an additional payment of 2,5 BYN, to children till 14 years - free of charge).

You can use transfer services
Book transfer