Around Belarus in 7 days.

Around Belarus in 7 days. The travel guide of Belarus VETLIVA presents you a cycle of articles "Around Belarus in 7 days", where you will learn about interesting places of our country. To realize this our team went on an exciting journey.

We decided that seven days would be enough to drive along the contour of Belarus by car. The first points of the route were Gomel, Chechersk, Mogilev, Vitebsk, Polotsk, Braslav, Grodno, Brest, Mozyr, Gomel. In total, we drove 2360 kilometers and spent 170 liters of diesel fuel. 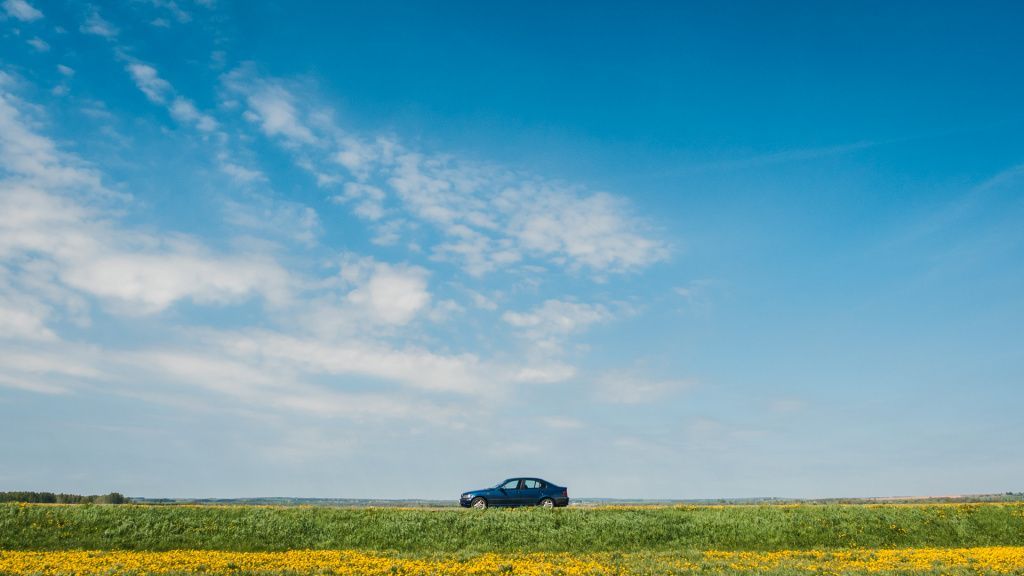 Our journey started in Gomel region and ended with the regional center - the city of Gomel. We expected bright emotions and beautiful photos, new acquaintances and adventures fr om this trip. Looking ahead, we will say that this trip surpassed all expectations! Back we brought 300 gigabytes of photos and video, so we couldn’t wait to share our impressions with you.

So, let's start. We remind you that the starting point was in Gomel region, more precisely, the city of Chechersk, which is located at 60 km’s distance fr om Gomel. At first the weather didn`t make us happy: it was cool, it was rainy, but all this did not stop us from getting a charge of positive emotions. The first sight on our route was the Chechersk City Hall. It is located at the end of the main street, but it is perfectly visible from any distance. 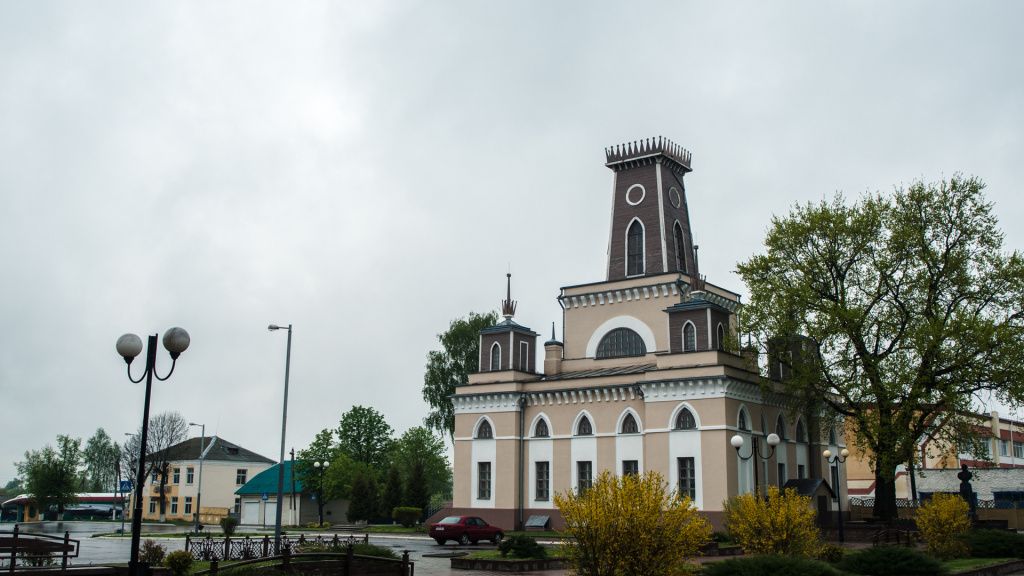 The Town Hall, located in Chechersk, is a perfectly preserved monument of classicism, built in the second half of the 18th century. The strictness of the forms, the symmetry and the centrality of the composition of the building are typical features of this architectural style. In 1974 the Town Hall suffered from a fire and more than thirty years was under reconstruction. Now there is a historical and ethnographic museum in the building, and on the top floor there is an observation deck, from which Chechersk can be seen, as if on your hand.

Near the Town Hall there is a central square of the city, administrative buildings and a monument to Lenin typical for the center of the most cities. In general, Chechersk is quite a compact city, all its attractions are within walking distance. Not far from the Town Hall there is an old plane. A little further - the Transfiguration Church, which is remarkable for the fact that its shape is round and it stands on the ring. This surprised us very much, because we have never seen such a thing before. 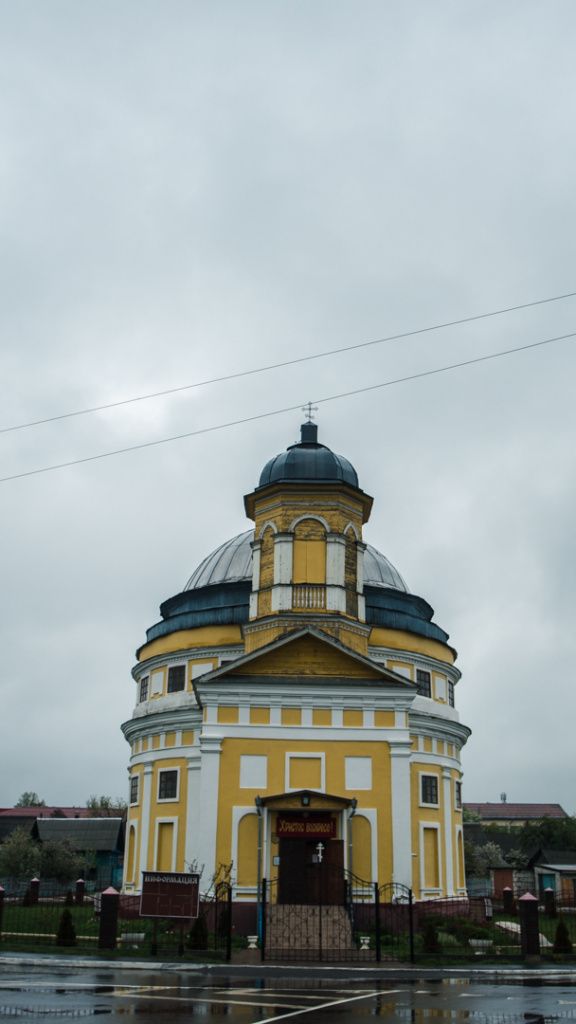 The church of an amazing form was built in 1783 on the initiative of Count Z. G. Chernyshev. A hundred years later, the building was dilapidated, and there were practically no church services in it. The church was restored in the early 2000s and is works today.

We visited the temple (here, by the way, there is an ancient icon "Descent into Hell", dated 1678). However, in addition to it, there is a large number of old icons on which you can hardly see anything. Although the temple is located in a lively place of the city, on the automobile ring, but when you enter inside, you forget about it: everything seems freezing, everything becomes quieter. 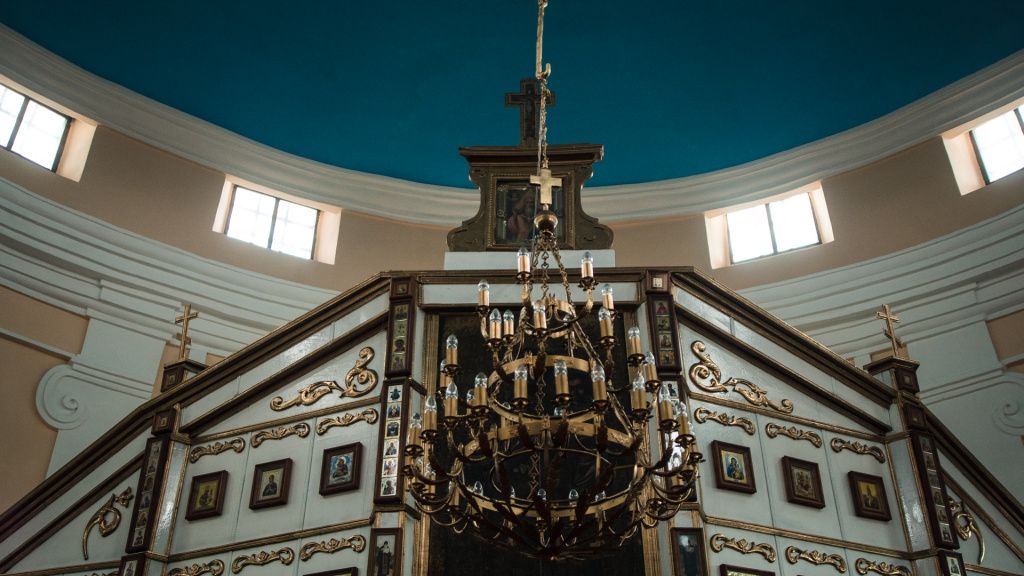 Further our way led to the Mogilev region, more precisely, to the village of Grudinovka, wh ere the Tolstoy homestead is located, now abandoned and closed, but, as it turned out later, almost closed. While we were driving, we met a lot of fishermen. There is a factory of processing plant located in these lands, and one of the quarries was flooded, so everyone can fish here. We approached them to see what could be caught here. In the bucket there splashed three crucians of the size of a little more than a man's palm. The fish are of ordinary size, as local fisherman Vasily told us. He has been fishing here for many years, and foreigners often come to these picturesque places. Fortunately, there is enough space for everyone. 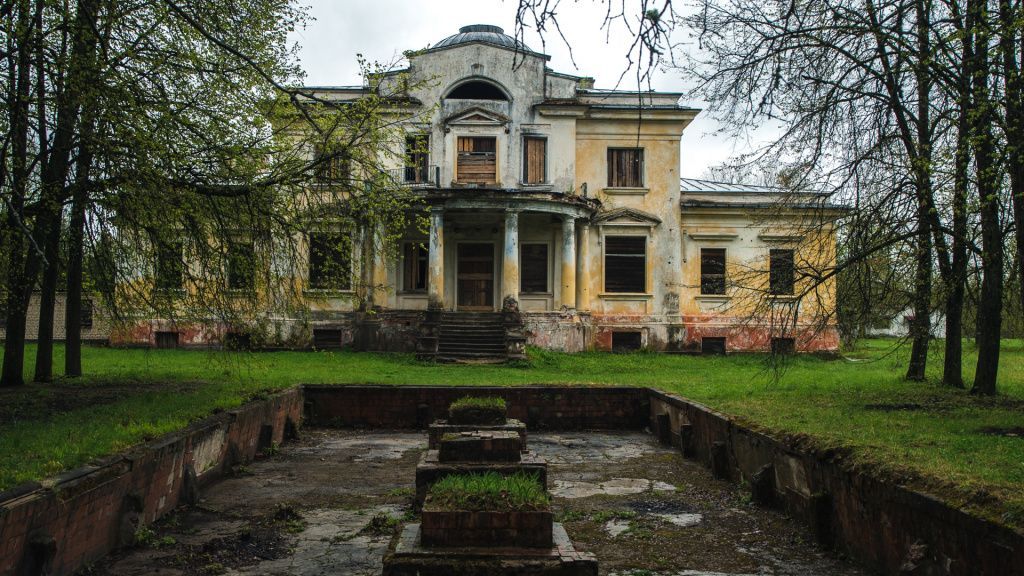 The Tolstoy Homestead cannot be found easily: the correct coordinates are on the VETLIVA website. At the entrance to the homestead there is a large lake, behind it there is an extensive park and gate. You will definitely understand that this is it, although there are no signposts here. In the park there grow different trees, but especially impressive oaks.

Opposite the homestead there is an abandoned fountain, which was once full of water. Now there is only rotten foliage...

The building itself is boarded up, although not so long ago it was possible to enter freely there. We could find an open window behind the building and decided to see what was inside. Not so long ago the building of the homestead was used either as a kindergarten or as a pioneer camp: we examined inside the images of red flags and Lenin, in the same place we saw a scene of wood. On the ground floor there are showers and toilets, on the first floor there are some common rooms, and on the third floor there are living rooms. It was much lighter here than on the first two floors. 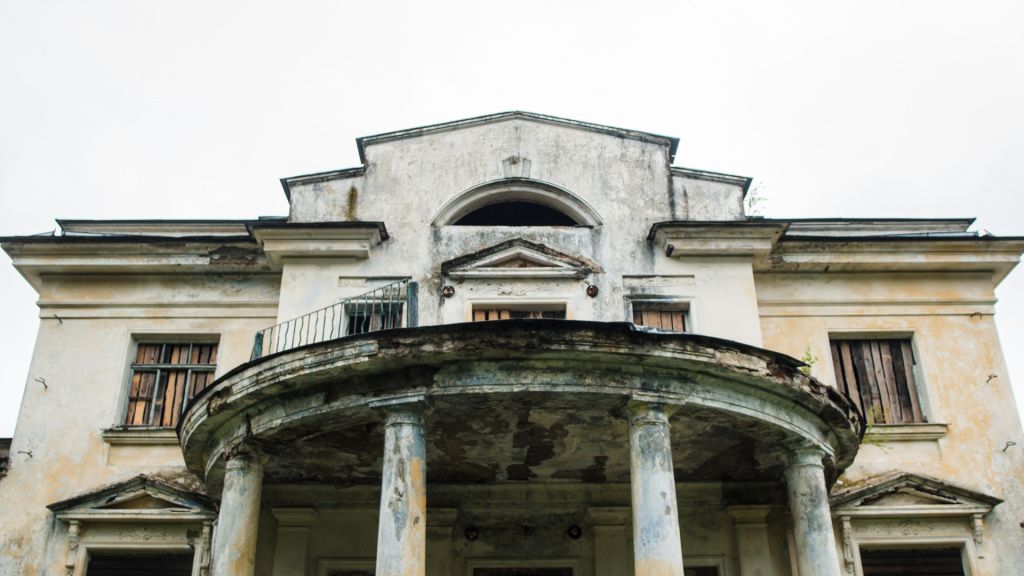 Having connected the fantasy, one can imagine how ladies are walking in lush dresses, and someone is going to the side of the lake to go on a boat. After wandering around the park and photographing the oaks, we decided that we need to go further. 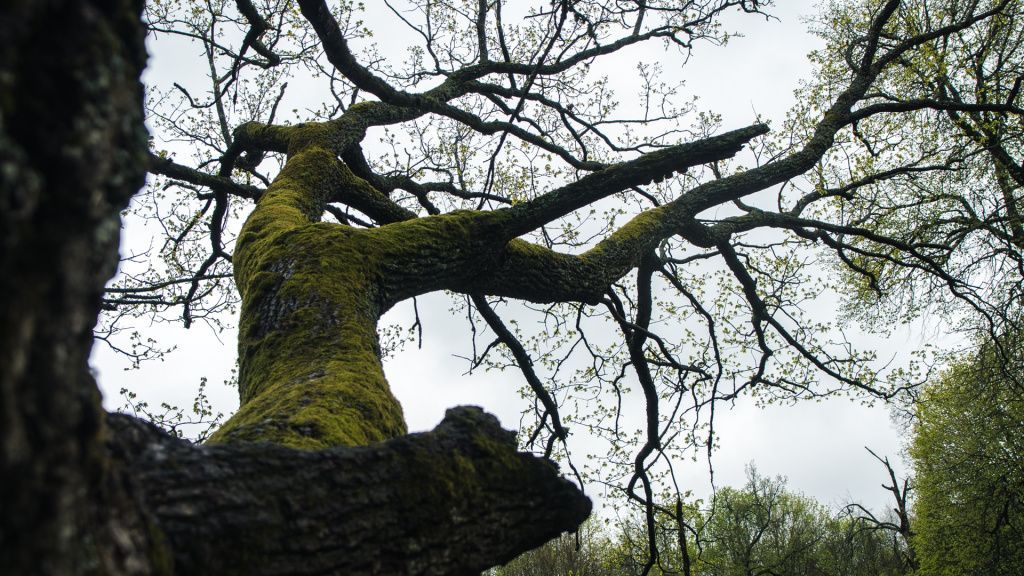 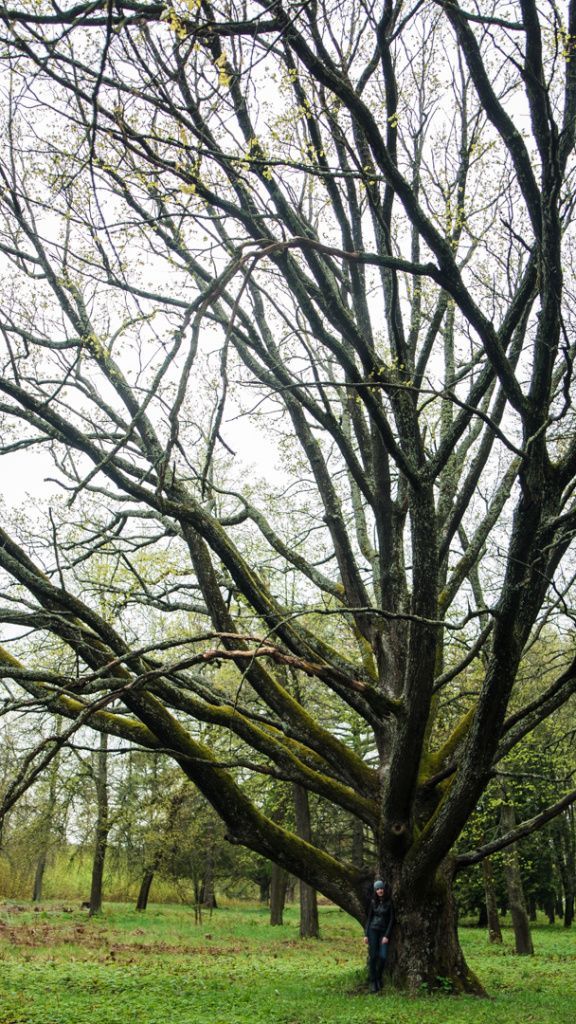 We moved to Mogilev, occasionally stopping along the road to make a beautiful photo. Passing through various settlements, you can see colorful houses or forest streams. The landscape of the Mogilev region is still flat, but small elevations already begin to occur. 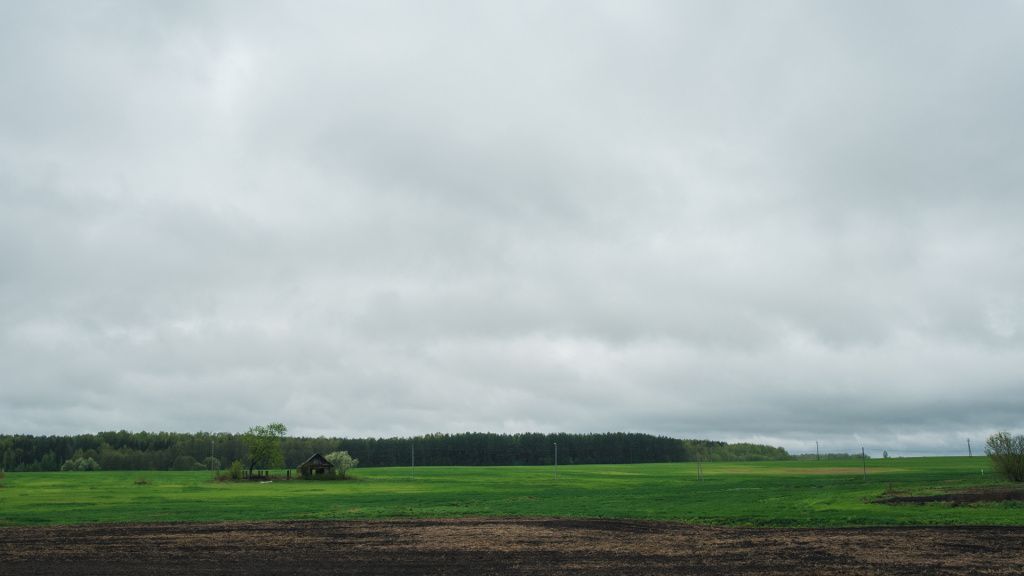 In Mogilev we wanted to see several interesting places: Mogilev Town Hall, Drama Theater, Buinichsky Field and Zoo, Pedestrian Street. In addition, we decided to spend the night in this regional center, so as not to get tired much on the way. By the way, there is a small life hack that will help to make your trip more enjoyable. The route is better to build, overcoming every day no more than 300 km. So you can see a lot, and you do not get tired at the wheel.

All the sights of Mogilev are within walking distance to each other. So, the viewing platform and the town hall are in the same place, which allows you to save time considerably. Near the observation platform there is also an underground passage, wh ere the entire history of Mogilev in old photographs is presented. In Mogilev, we were not for the first time, but even now it did not disappoint us.

We started our way through the city from the pedestrian street. There are several famous sights on it. The first guests of the city are met by Zvezdochet. Around the monument there are 12 chairs, symbolizing the signs of the zodiac. There is a tradition: you find your own and take pictures with him. In the evening from the telescope of the Astrologer in the sky there beams a bright spotlight beam. They say that it can be seen even from space! Let even those who saw him, you can count on the fingers. Probably, Mogilev residents simply want to believe in such an exceptionality of their sights. 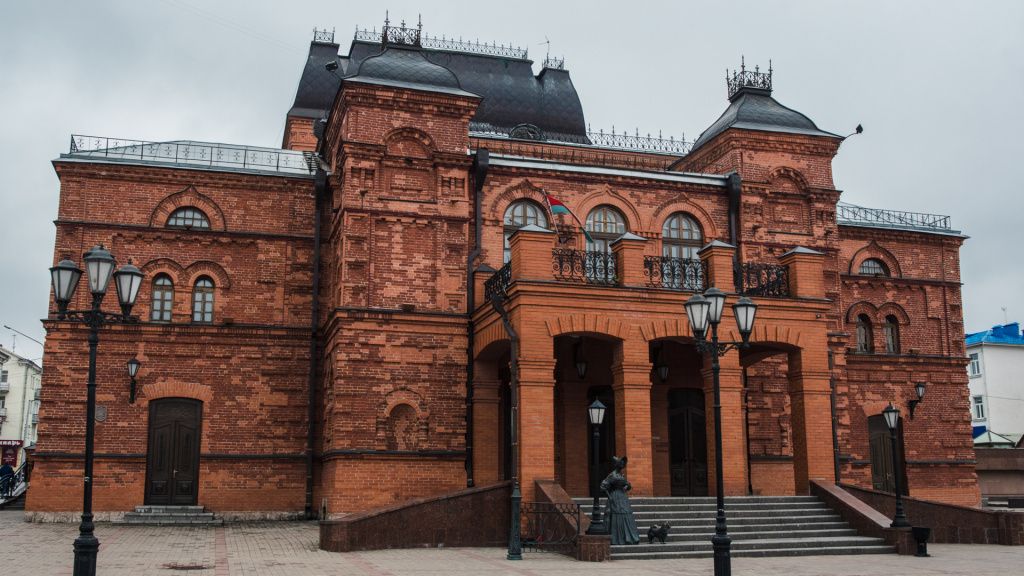 The first thing you see after walking on a pedestrian street is a large red building. Coming closer, notice the posters, and then there is an understanding that this is a dramatic theater. Looking ahead, we will say that the Gomel and Vitebsk theaters are buildings with columns with a height of 5 floors, a large entrance. They are not built from red brick and do not have such curved roofs.

To the left of the theater there is a catholic church, surrounded by five-story buildings: this neighborhood is rare. Another 5 minutes passed - and our team was at the snow-white tower. It was a beautiful building of the times of Magdeburg Law, the city government body - the Mogilev Town Hall. 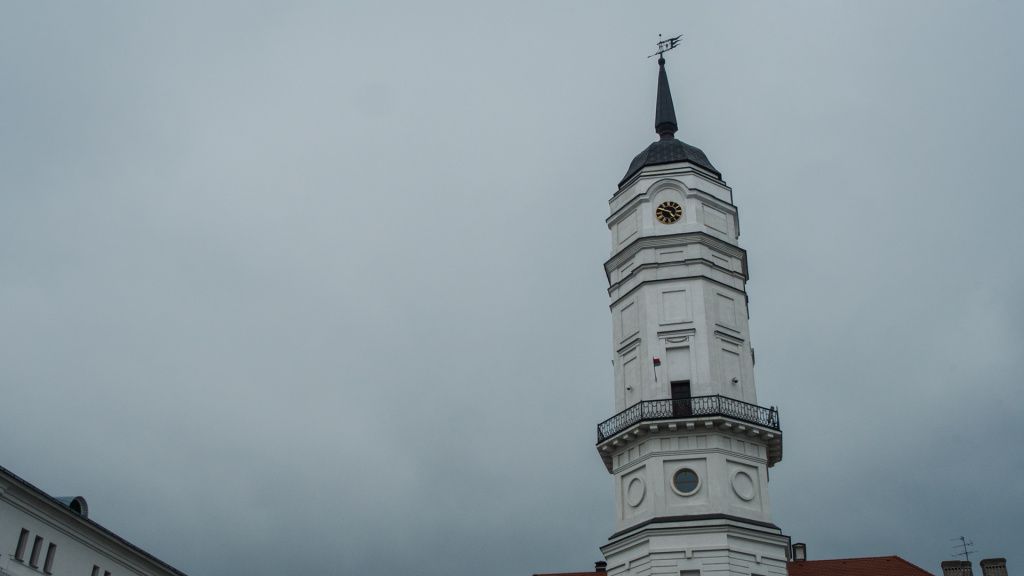 This is the second Town Hall, which we meet on our way. On it there are the clocks, which possess one feature: at a certain time there is a mechanical figure of the trumpeter, who plays on the pipe. The schedule of his appearances is under the tower. In our case, this happened at 20:42. On the square on this weekday we were alone, so it seemed to us that he was playing only for us. The melody is very pleasant and is broadcast all over the district.

The Mogilev Town Hall is an ancient building that appeared in the city back in 1681. Since then, it was repeatedly destroyed and rebuilt, and in 1957 it was finally demolished. From 1992 to 2007, construction work was carried out, and in 2008 the renovated Town Hall building once again adorned the streets of the city.

The town hall stands on a large viewing platform, from which an excellent panorama of the city and its infrastructure opens. It is interesting to see how life is boiling below, traffic is not stopping, everyone is in a hurry, and at the top you listen to the sounds of the pipe and time stops for you. 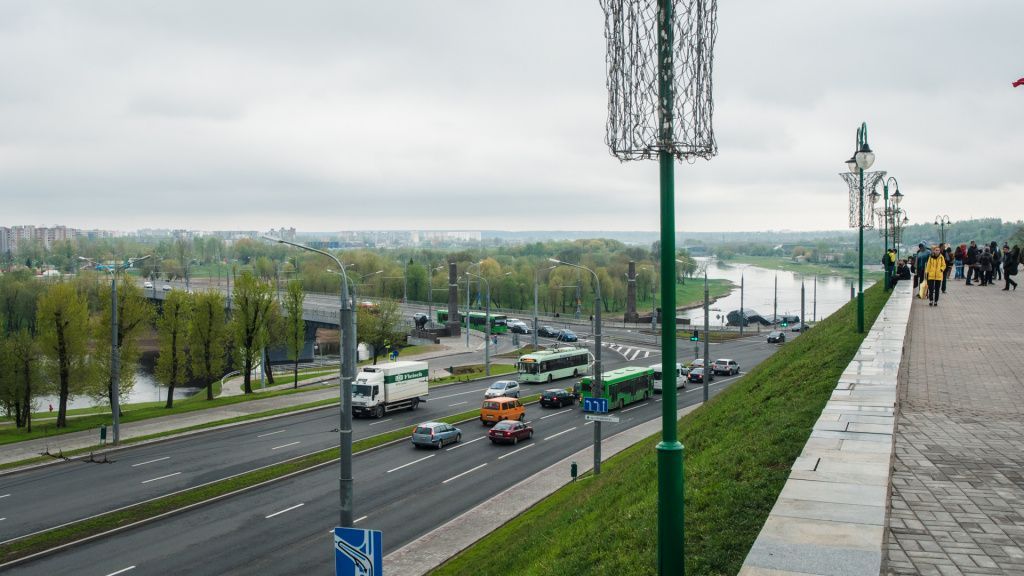 It's already getting dark, so we decided to study the surroundings of Mogilev tomorrow and start with Buinichi and its neighborhoods. It will already be another day and a different story. Tomorrow we will have a trip to Vitebsk - to the northernmost part of Belarus.

In the next article, you will receive a report from the border zone, a deaf village and snowfall, as well as a rise to the seventh heaven.