How often do you ride a bicycle? And if you knew the place where you could see a beautiful sunset or sunrise, where it's deserted and quiet, where you can make a picnic or just lie on the grass during a picnic? Perhaps, then you would get on a bicycle more often?

The tourist portal VETLIVA, as an expert on traveling, decided to create a guide about beautiful places of the big Belarusian cities, which can be reached by bicycle. Its purpose is to get you learn the very interesting locations of your city.

How we biked through Gomel you can read in this article, but for now Mogilev and 24 kilometers’ and 3 hours’ trip are waiting for us. Let’s go!

At 15:30 our guide appointed a meeting at the railway station of Mogilev. The bike was quickly assembled and ready for the trip. On the thermometer there was only 5 degrees, it had rained recently and our team did not know what to expect fr om the trip.

Here we noticed a man in a sports uniform on a bicycle - it was Artiom, our today's guide to Mogilev. Artiom is a photographer, as well as the founder of MOGILEV BIKE EXPEDITION. He organizes routes and gathers enthusiasts who are ready for cycling and discovering new places.

Looking ahead, let's say that Artyom formed a route based on his hobby - cross country. That is why the route ran along rough terrain with elevations and beautiful scenery. 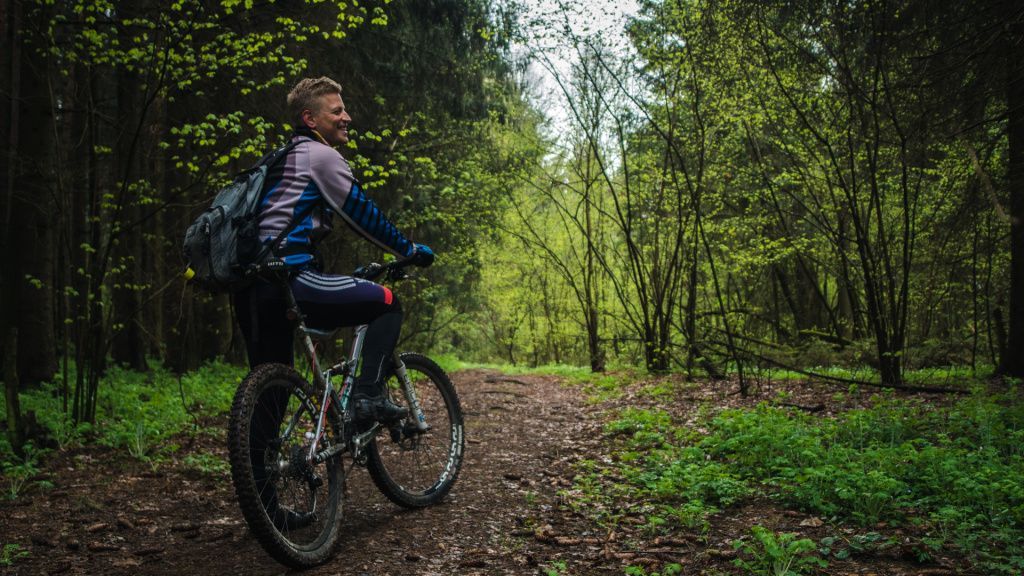 Our team, of course, was not ready for this speed, but we tried as best as we could. Unlike our bodies, our bicycles were ready for such difficulties. Artiom was ready for one hundred percent, for tomorrow he had planned a pivot with a length of almost a hundred kilometers, so today he just warmed up with us.

The first couple of kilometers we were getting out of the city center towards its outskirts. While biking, we asked a couple of questions about how things were going with cycling in the city.

- Cycling in the city exists, however, individual classes as always on their own: mtb, fixes, beams, crossovers - all hang out separately, but during the opening season it is possible to unite all.

- And what about the infrastructure?

- Well, as you can see, the outskirts of the city are not designed for bicycles: there are neither understatements, nor wide tracks, those that already exist are made poorly and with errors. There is no road marking, at some places there is no asphalt at all, at others the width of the road does not allow two bicycles to go. However, we must admit that every year it is getting better.

While we were talking, there appeared a forest closely. As soon as we got there, the air changed. It was the fragrance of the spruce forest soaked with the morning rain ... We were struck by the contrast of the bright green grass under our feet and dark intertwined tops of the trees. See it all yourself! 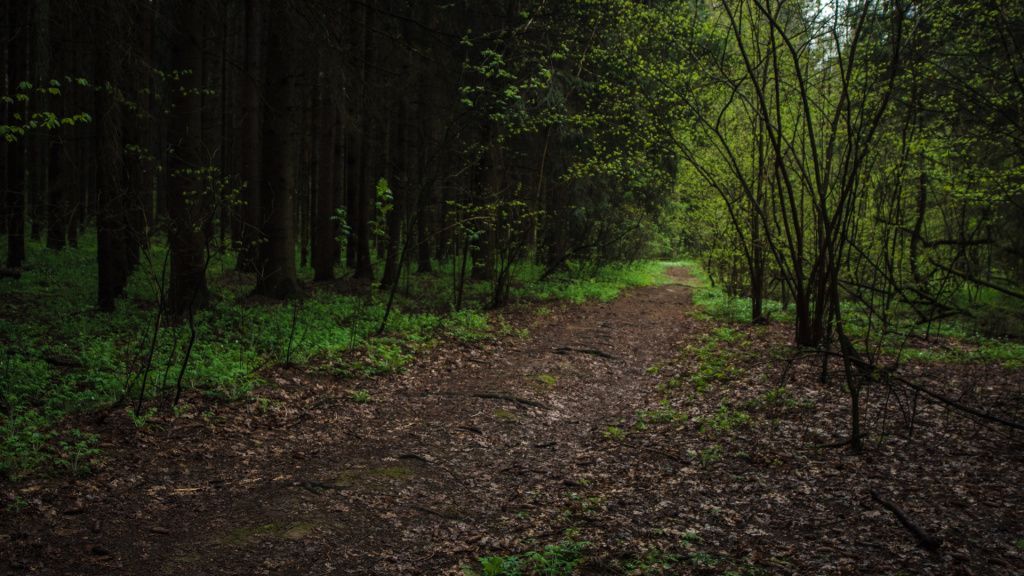 The first point of our route was a forest park wh ere there is a lake. Locals call this place the Lake in Gaih. Here there are narrow paths with a slight slope, which are very pleasant for the bike. Then Artiom shouted: "Accelerate!" - and we rushed down the hill. As it turned out, in the end a break slope was waiting for us with a narrow path. Step to the right - and you will fly far down! But it was not a waste of time to get there. Artiom brought us to the observation platform, which is located above the lake. From here you can see a wonderful view of the green fields and the village of Old Pashkovo far away.

- Artem, why have you chosen this place?

- Since I make photos, this place is ideal for sunset photography: the sun sets right above the horizon. In addition, we are far away enough fr om people, one can quietly think or build plans for the future here. 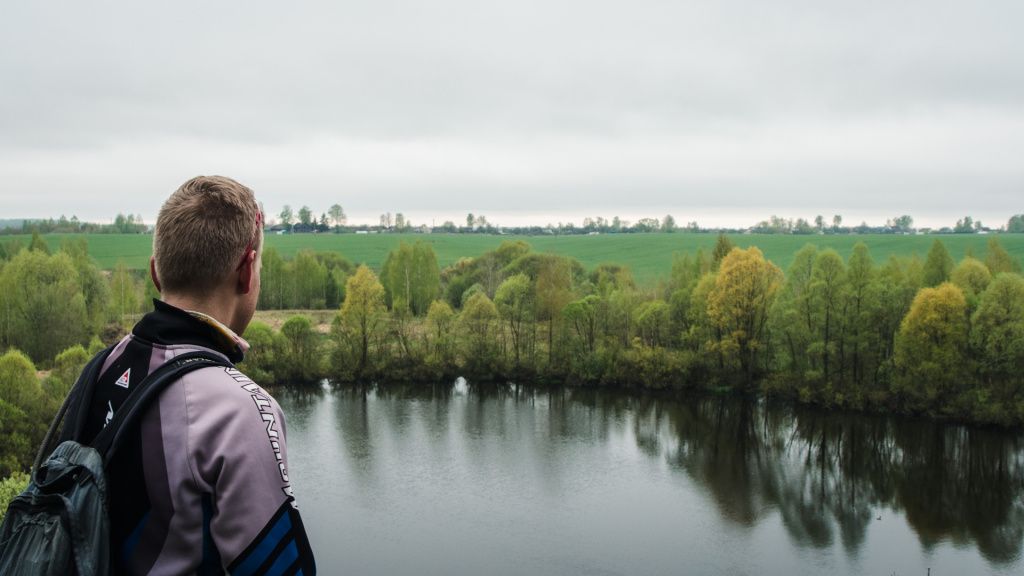 Indeed, the view of the lake is gorgeous! After a short stop, we took a breath, took a couple of photos of our iron horses and biked on. 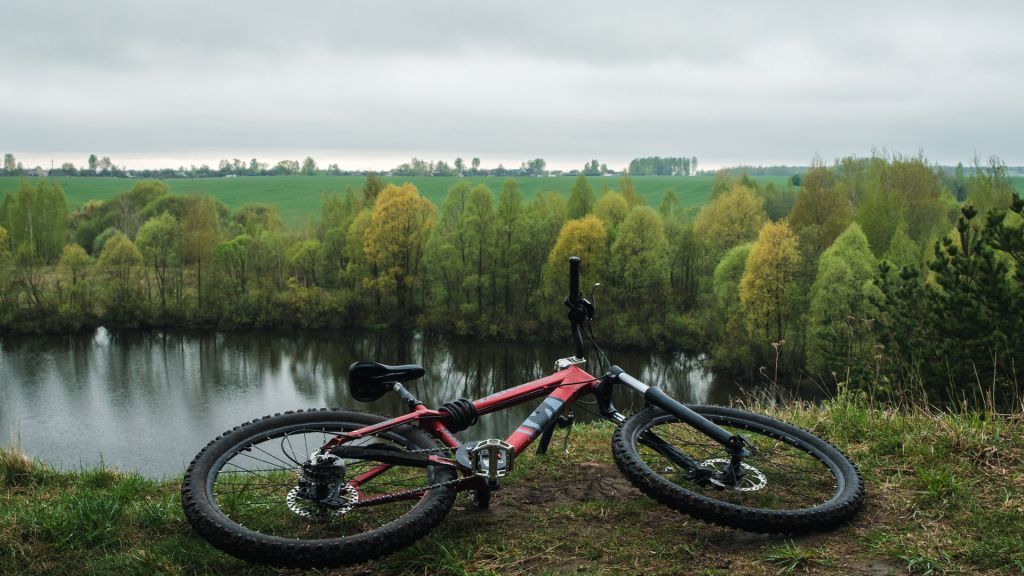 Having marked the point on the tracker, we went to the next location. Artiom led us to another forest park. On the road there was clay, we all smeared, bicycles became heavy, and the wheels were all in mud. Soon we found a dry stretch of road and continued. 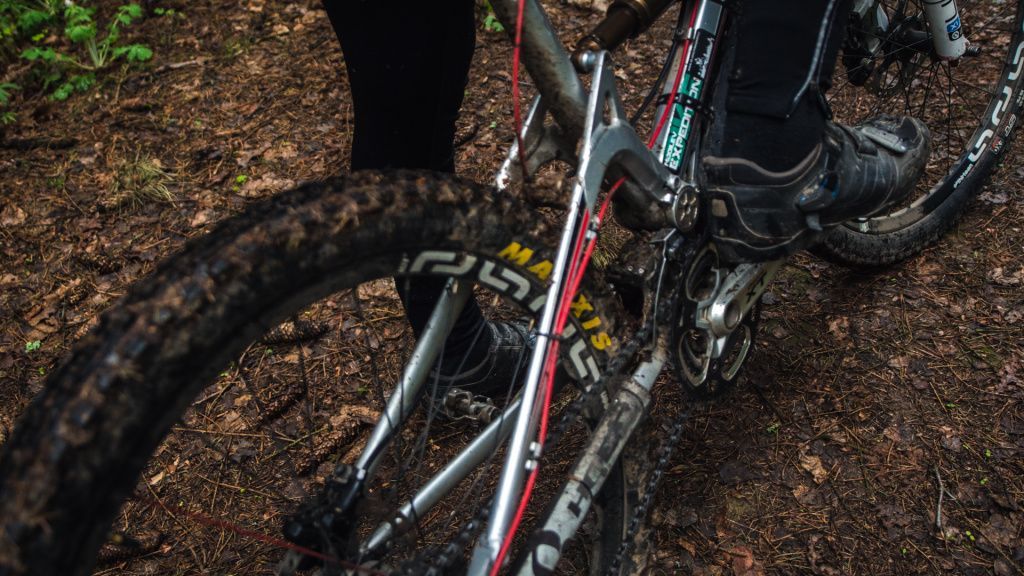 We kept our way on to Pechersky Forest Park. It is an extensive green zone with a large network of wild and refined paths. 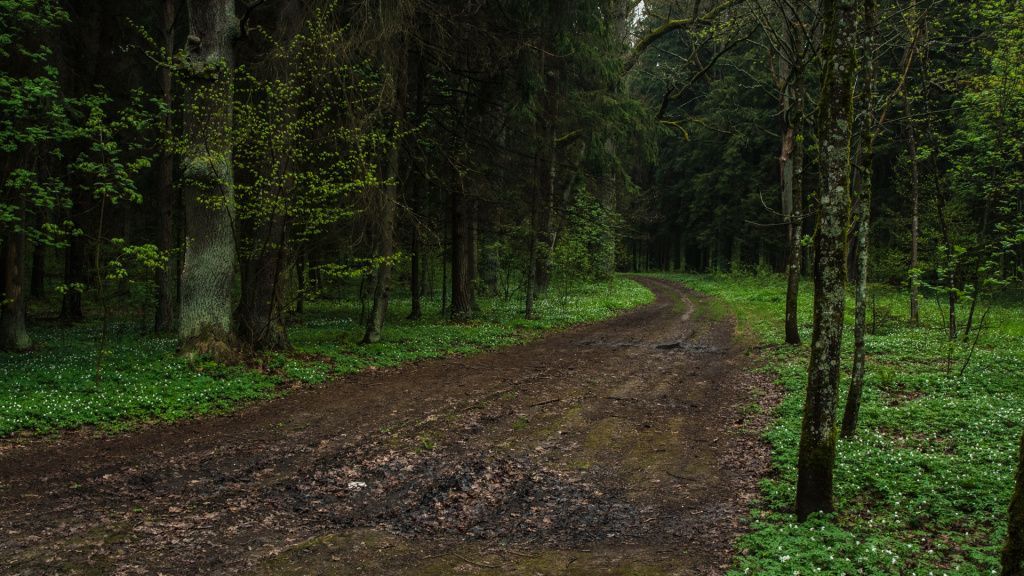 Here we saw not only beautiful places and paths, but also cut down pieces of wood. As Artiom said, the whole Mogilev is now fighting for this forest and is trying to save it fr om cutting down. 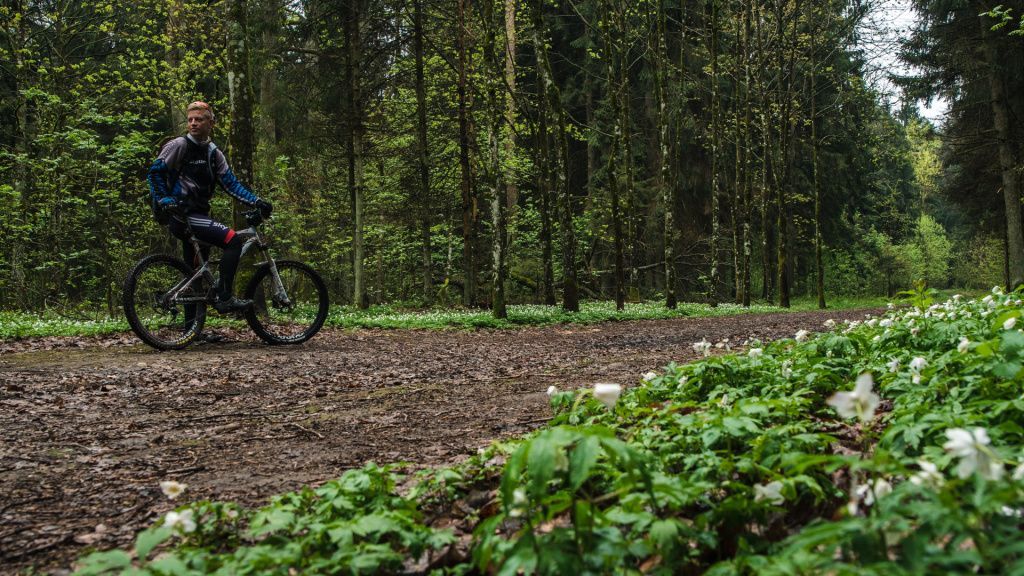 This place is just for cycling: wide paths, fresh air, trees and flowers around. The surrounding landscape frees your head out of all that has accumulated during working days, helps to relax both with your body and soul. The brain becomes clear, and in general after such a walk the entire body is toned up.

We continued our journey. We have already covered 10 km of our expedition. The forest park is not over yet, but we have practically left it. As it turned out, the park is almost in the center of the city. In the photo below you can see Pechersk Lake along with the paths. By cycling along one of its shores, you can admire the opposite shore. We were very lucky with the weather: it was cloudy and little sun, the forest seemed to be magic due to the soft and muted light .. 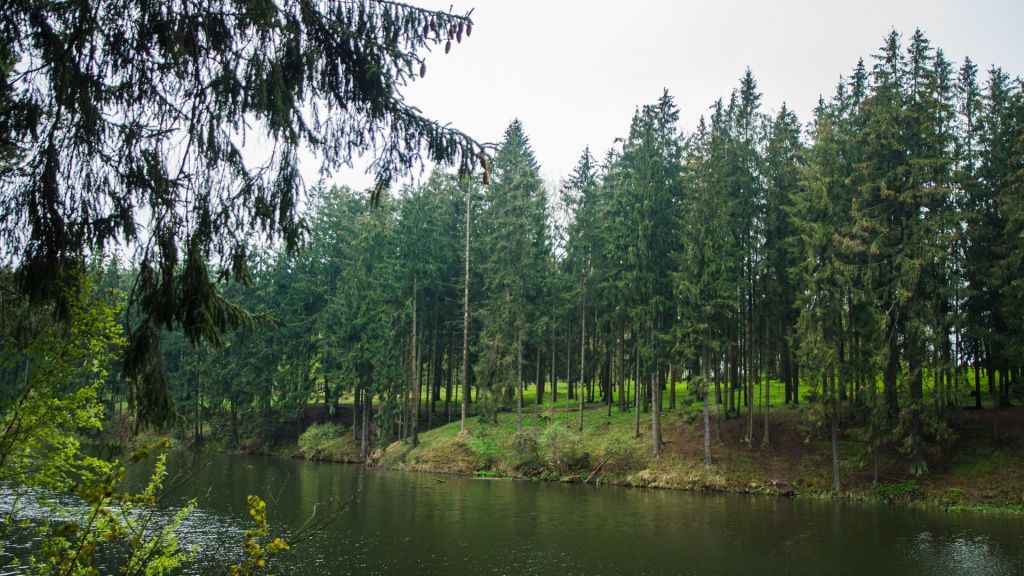 We have visited the ethno-village of Zelenaya Roshcha, which is located at the exit of the park. There you can buy self-made alcohol, products made of genuine leather or metal, which the blacksmith makes right in front of you. During our expedition we saw knight battles and archery. The entourage is supported and enhanced by medieval music, which causes associations with the "Vikings" TV series.

After leaving the forest park, we decided to have a bite and restore a little bit: we bought a yogurt and gingerbread, found a convenient shop and relaxed for a while. No wonder: we already were in the center of the city, wh ere a long climb was waiting for us, wh ere we needed to be rather strong.

On the way we saw the unique building of  Mogilev Museum of Maslennikov with a very interesting roof. This visit was not in our plan, therefore, after making one photo, we went on. 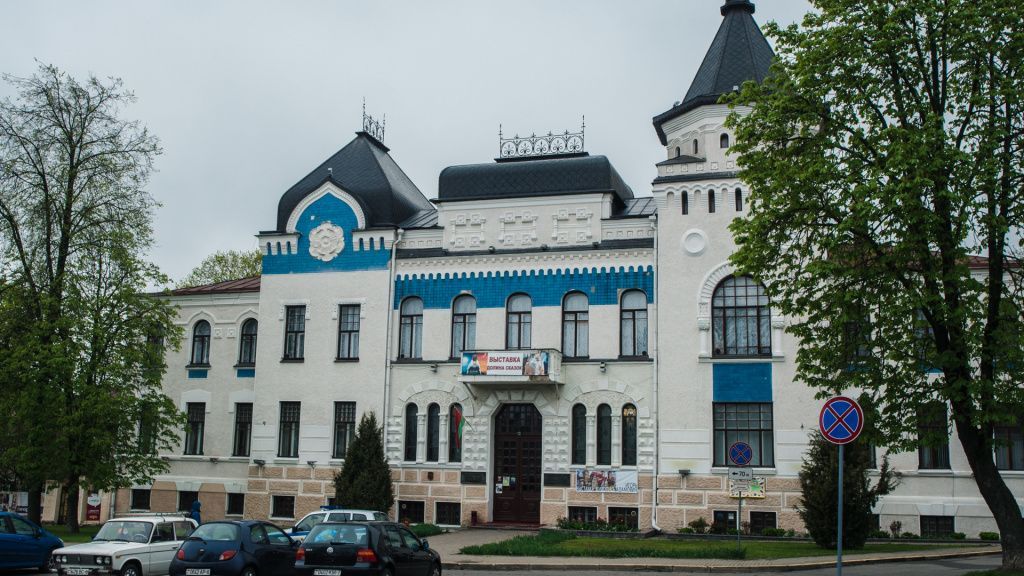 The museum was built at the beginning of the last century, namely in the period from 1903 to 1914. Initially, there was a peasant-land bank. The architecture of the building deserves attention - it combines the key elements of late classicism, modernism and pseudo-Russian style popular in those years. It is interesting that until now the building has remained practically untouched.

The next place was the pedestrian street of Mogilev. Today there were very few people here because of the weather, but, as Artiom said, it is usually crowded, because there are many cafes and other offices in it. In addition, there are the famous sights of Mogilev here too, for example, the original sculpture of "Skywatcher". 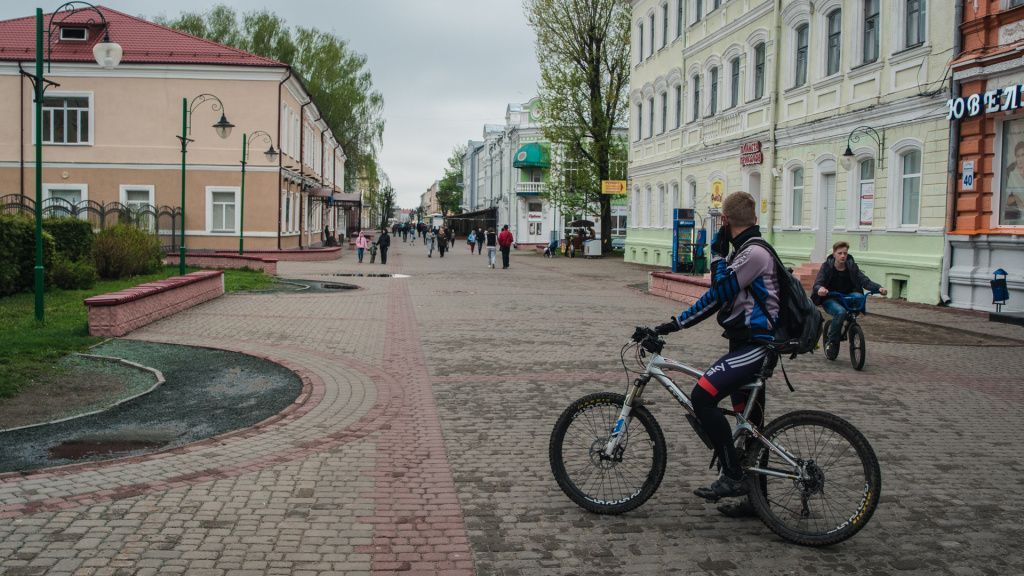 In the end of the street, slightly to the right, there is also Mogilev Drama Theater. 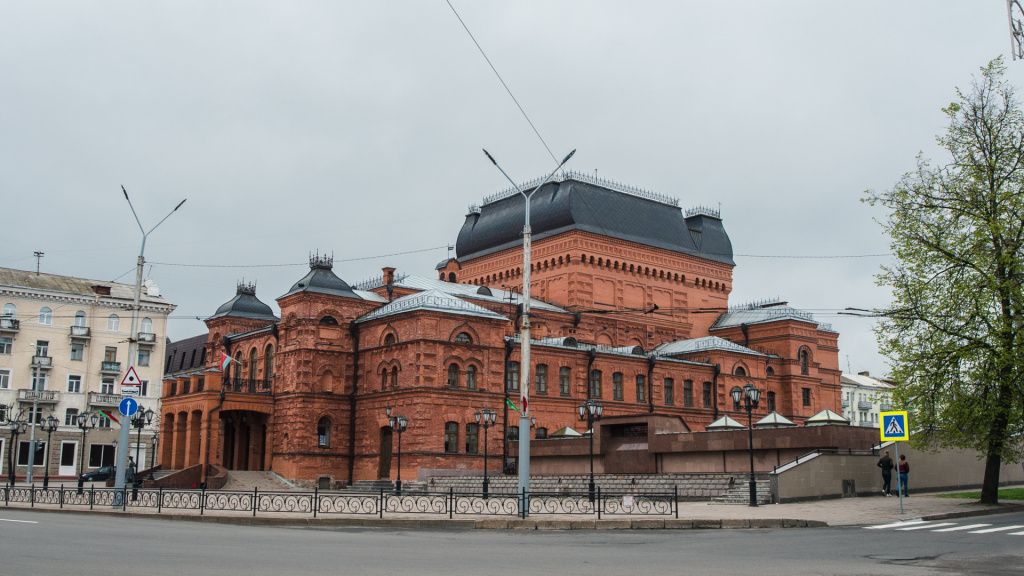 The culture of the city was respected and appreciated, and therefore Mogilev needed his own theater. The money was collected by Mogilev citizens themselves. It is unknown how many years they needed to collect money, but in 1886 the necessary amount was finally collected. In just two years not far from the present Komsomolsky Square there was built a majestic building designed by architect Kamburov. Already in 1889 for the first time in the history of Mogilev, the opening of the theatrical season was held.

The buildings of the museum and the Drama Theater have similar roofs, that we have not seen anywhere else. Not far from the dramatic theater there is another beautiful place - the Mogilev Town Hall. There is also a viewing platform, from the top of which there opens an amazing view of Mogilev. 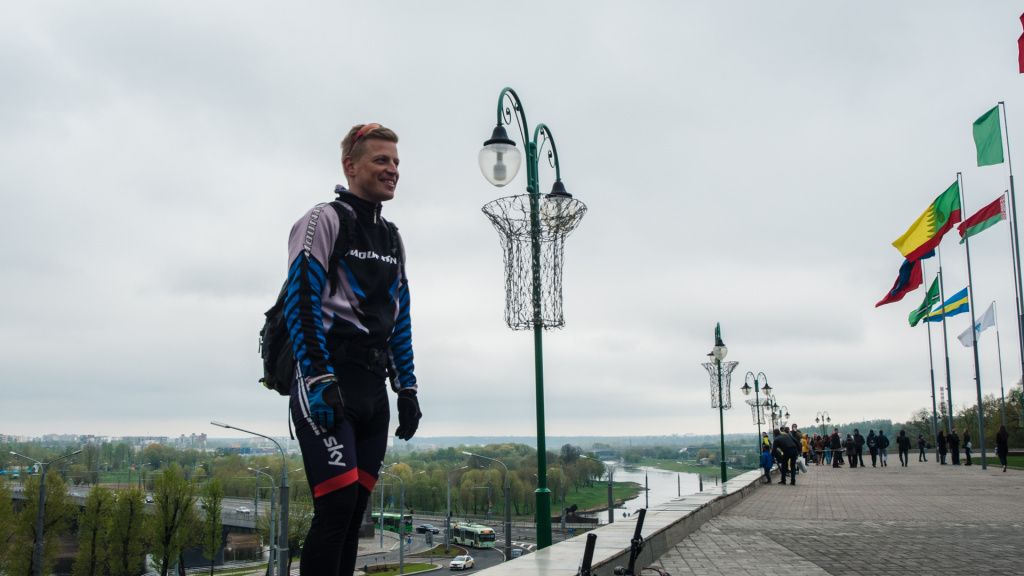 Every day the Town Hall makes the guests and residents of the city happy with the original show: the metal figure of the trumpeter performs a beautiful melody. It was not just the right time to get here and we decided that we would definitely return in the evening and listen to this music.

Now Magislav (the name of the sculpture that looks out to the balcony) every day performs a melody from the balcony of the Town Hall three times a day - at 12 o'clock in the afternoon, at 8 pm (the symbolism of this time is associated with the symbol of the eight - the sign of infinity) and the third time – in the minute when the sun sets in Mogilev.

From the site you can see a bridge guarded by the lions. 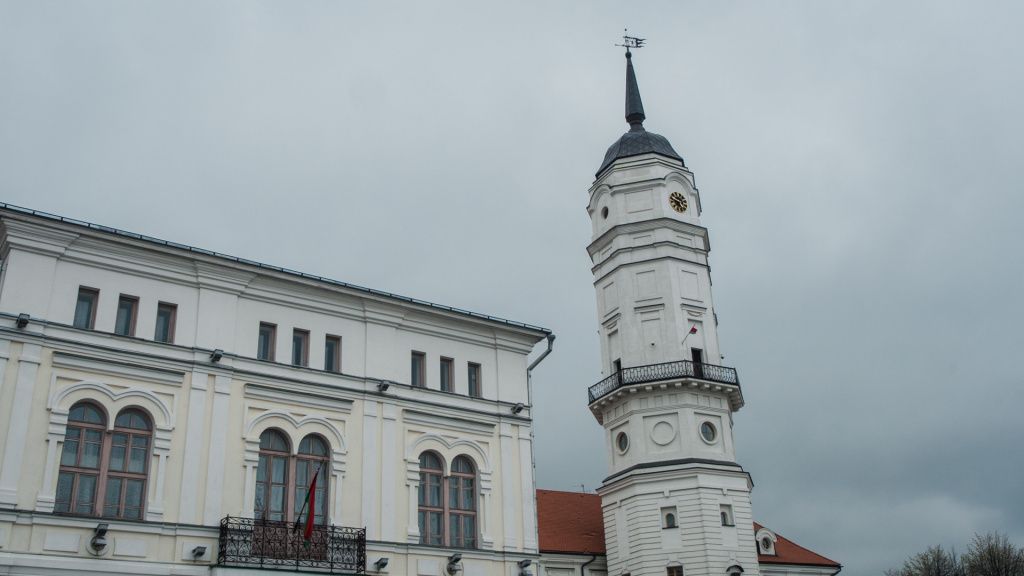 The first wooden Mogilev Town Hall was built in 1578. It stood at the beginning of Vetrenaya Street (now it is Leninskaya Street). The Mogilev City Council made a decision of constructing of the Town Hall made of stone in 1668.

Then Artiom remembered that there was a free museum nearby. We felt interested, that's why we went there. It turned out that it was situated in the underpass, very near to the center. 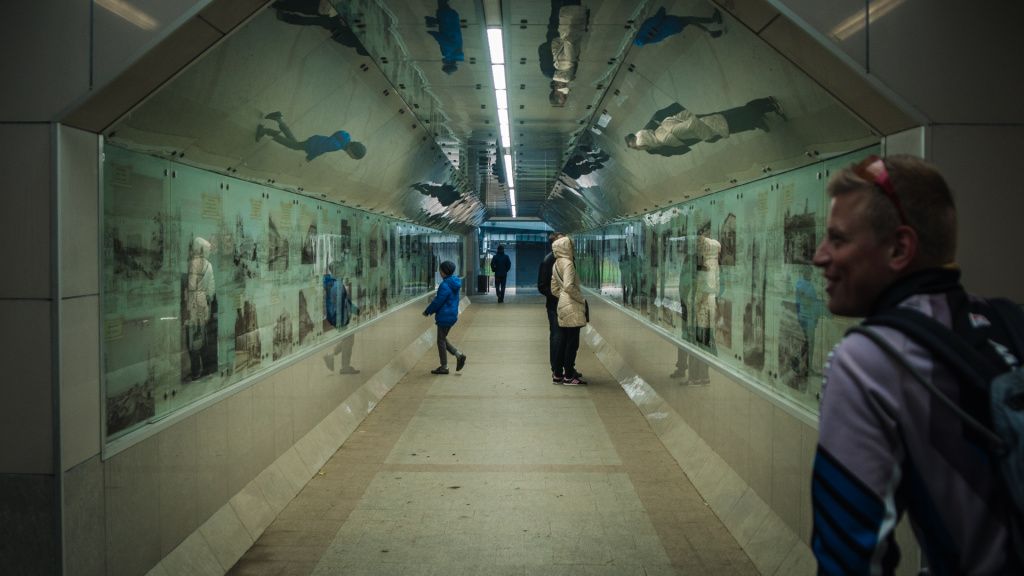 In this underpass you can trace the whole history of the city of Mogilev and see the images of ancient buildings that once stood here, as well as what the town hall originally looked like. At the end of the corridor of the museum there is an exit to the embankment of the Dnieper, from wh ere a very elegant view opens.

Our journey is coming to an end. Artiom biked back with us to the railway station, we said goodbye and promised each other that at least once, but we would ride together again.

See you in Vitebsk! Meantime you can our cycling expeditions on the interactive map.