There is one funny story VETLIVA would like to tell you, and it is not known whether this is true or not, so take it as a joke with a bit of truth. It sounds like “British children were very frightened when at the New Year holiday the Russians suddenly began to call for Dead Morose”. Actually it is just consonant with that as Belarus, Russia, Ukraine and many other countries of the post-Soviet space call the main wizard of the New Year's night. No sullenness, we assure you: it is a very kind greybeard, who fulfills the wishes of the children and whose name is actually Grandfather Frost.

Like Santa Claus, Grandfather Frost presents gifts, secretly congratulates all the people around. By the way, the biggest fear of all children is to find out that russian Santa Claus does not exist in reality and the gifts are actually presented by parents. But hey, we all know that he exists, right? 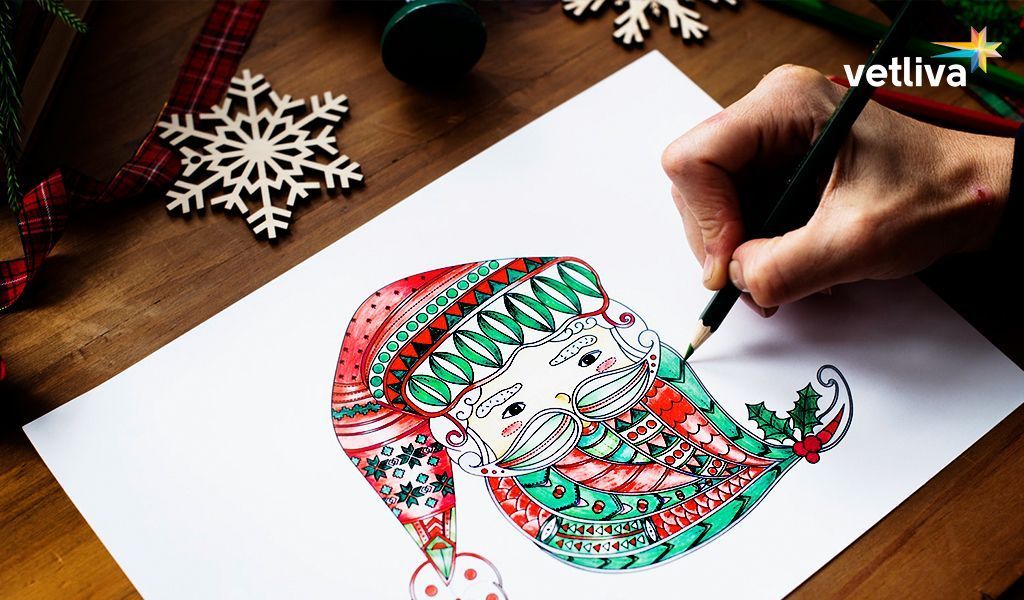 All the magicians have their own stories. By the way, the prototype of Grandfather and Santa Claus is considered to be christian St. Nicholas. He lived a long time ago in the Turkish city of Myra and was a good miracle-worker and a persecutor of evil, the patron of abducted and lost children. In post-Soviet countries, Nicholas the Wonderworker became one of the most beloved saints. Simple peasants prayed for his help if a cow fell ill, or there was no rain for a long time, or some other misfortune occurred. Gradually, St. Nicholas in Western countries began to be called Santa Claus. But in Belarus, the translation of the name of the saint gave a very peculiar one. The fact of the matter is that in the Soviet years religious symbols were actively supplanted and, according to the decree of the Central Committee of the Communist Party of the Soviet Union in 1937, the saint was replaced by a character named Grandfather Frost. 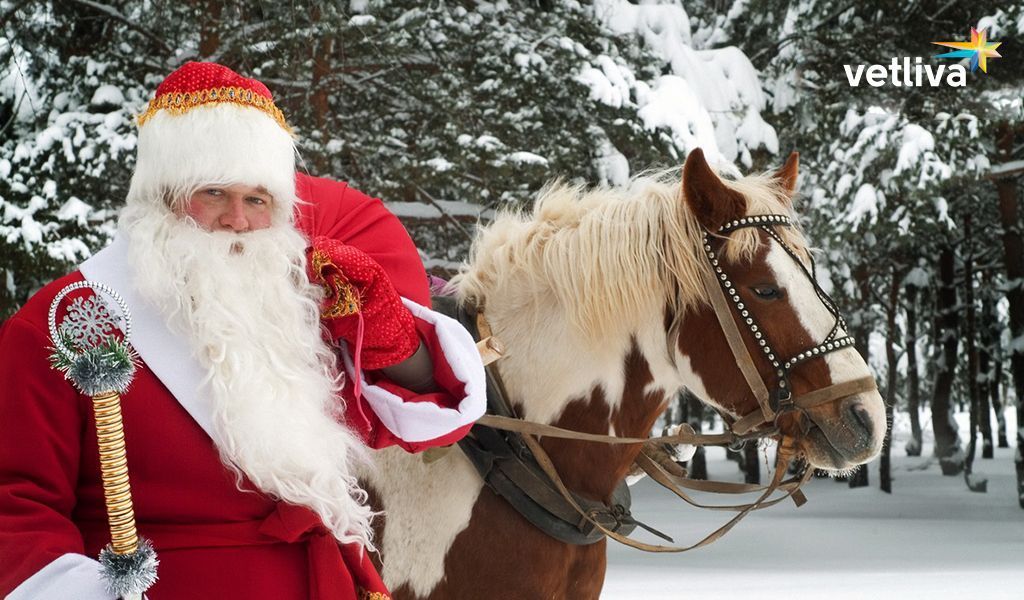 Santa Claus and Father Frost: what is the difference?

So what is the difference between two kind grandfathers who delight children every year? VETLIVA has the answer!

Well, Grandfather Frost is a humanized element of frost that gives presents for the New Year, mostly — for children. He is helped by his granddaughter — Snegurochka, a young girl in blue robes and with long blond braids. By the way, it’s said that Snegurochka can melt under the hot sun, so in the summer she does not come out of her icy hut. We’ve already spoke about there cute house in the middle of coniferous forest in our article about best places to spend New Year. Read further if you wanna to know more! 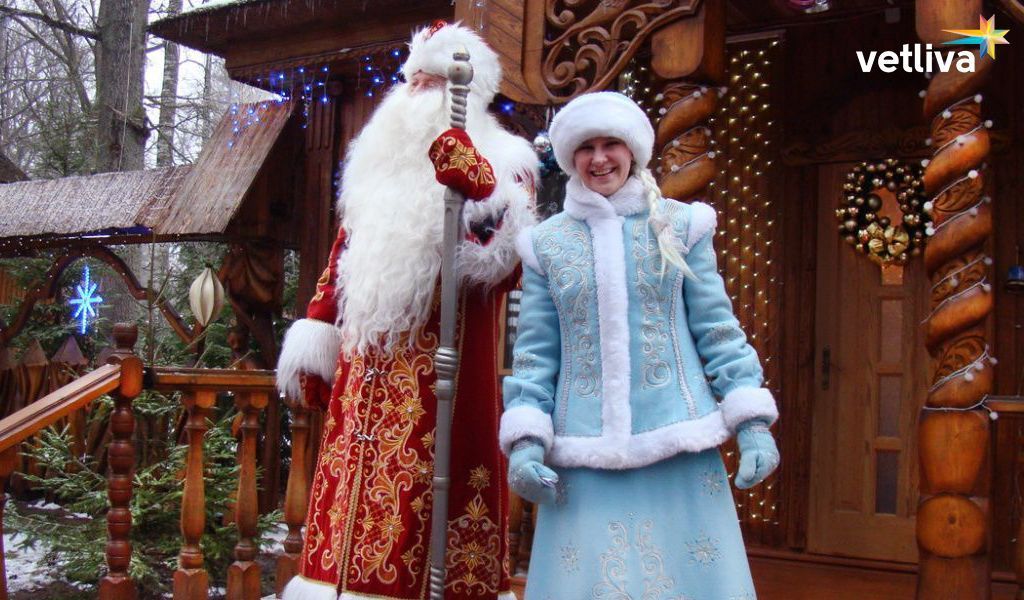 Meanwhile Santa Claus gives presents for Christmas, so by the New Year he has nothing to do. This difference lies in the fact that the New Year is much more important here than Christmas, Catholic or Orthodox. He is helped by young and beautiful elves.

Grandfather Frost personified snow and frost, so his clothes is usually in blue and white colors. However, red and green are allowed. As for Santa Claus, nobody remembers how did he look like before. Since about the mid-fifties of the last century he wears red and white clothes (thanks to Coca-Cola advertising, by the way).

Russian Santa is dressed for the weather: a long fur coat to the ground is sewn with patterns, belted with a sash, a fur collar, felt boots, and warm mittens. On the head he has a hat of a certain shape, trimmed with fur. Western Santa Claus wears light jacket, pants, shoes, wide belt, light gloves. Also he has a charming cap with a pompom. According to tradition, Grandfather Frost has a long beard to the waist and sometimes even to the floor. For Santa, it is shorter, but for both the beards are snow-white and thick. Santa's kind sight hides behind half frame gold glasses. 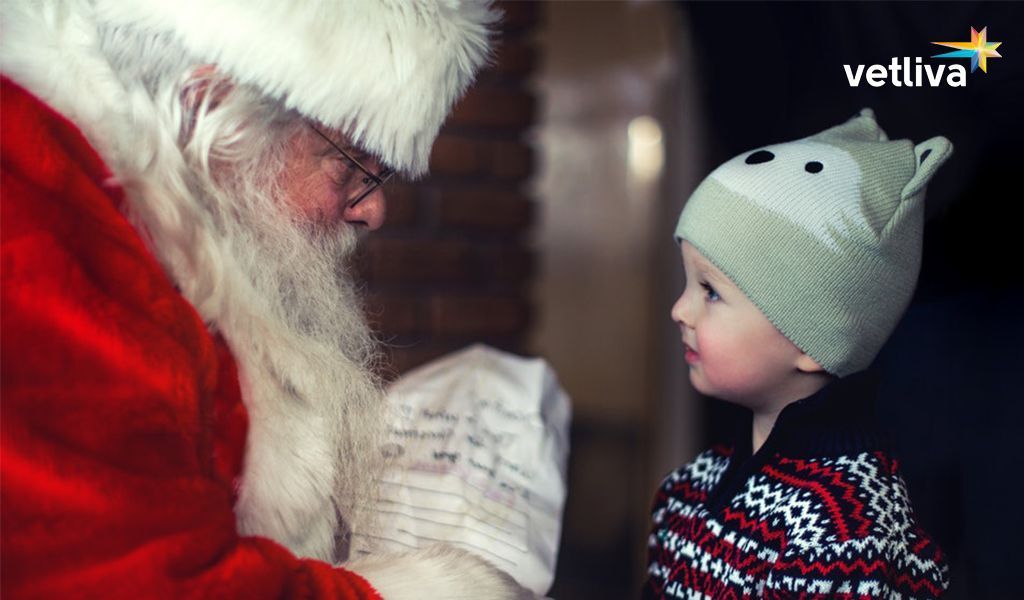 Each of these cute old men has their own attributes: Santa Claus walks with a big red bag of gifts — mouth is watering when you look at so many presents! But as for Grandfather Frost has a crystal staff with a round tip. It is believed that with this staff russian Santa can freeze unshaken people, when the good one receive happiness for the next year after a touch of the staff.

Where to find russian Santa?

While Santa lives in charming and snowy Lapland and there is no way for ordinary people to see his house, Grandfather Frost is ready to welcome everyone! He lives in Belovezhskaya Pushcha with his granddaughter, and every year hundreds and thousands of children meet him in the fabulous house. Here you can have a tasty meal, dance a round dance around the Christmas tree, write a letter with wishes for the next year and decipher Snegurochka’s puzzles. 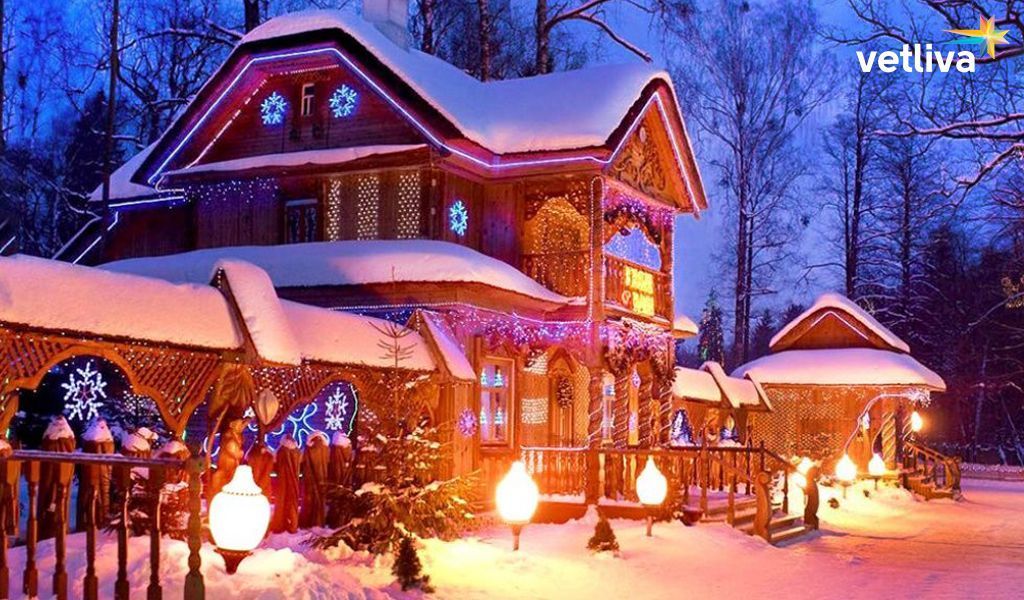 Want to see a living fairy tale and get to know a real winter wizard? VETLIVA is ready to offer you this opportunity! Belovezhskaya Pushcha is open to the public at any time of the year, but very soon there is New Year, during which the real magic is created.

Like it if you like it, share your impressions of what you read, tell the story of russian Santa with friends and read the Blog so as not to miss the most interesting facts and the latest news about Belarus! And remember: a fairy tale exists even in the most ordinary things around you. Just take a closer look!

The holiday is coming: where to spend New Year’s eve in Belarus?