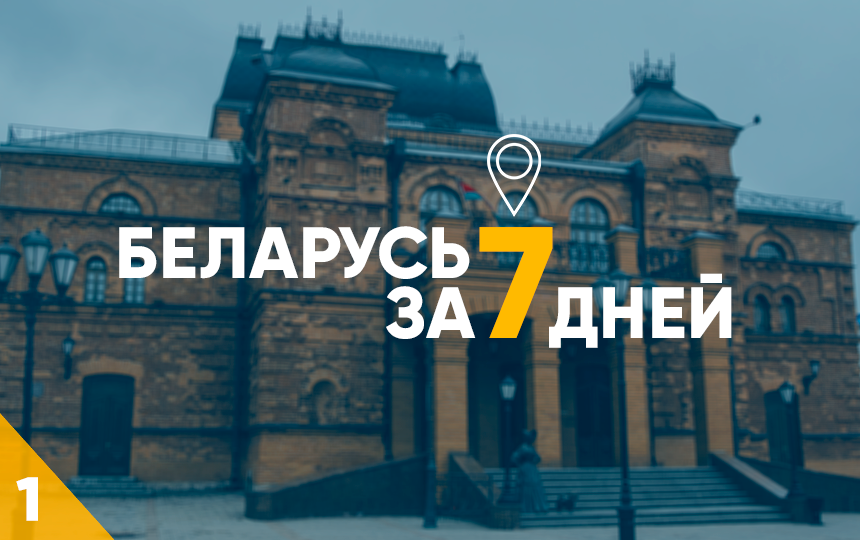 Have you thought that in Belarus you can make not just a short trip, but practically the whole “around the world”? This is the goal that the VETLIVA team set itself: to travel all over Belarus along the contour of its borders in seven days. Our epic adventure begins in the vicinity of the Gomel region and ends a week later in the regional center itself. Just imagine its scale: 3300 km of track were covered, 180 liters of diesel fuel were spent and 300 gigabytes of photos and videos were taken. The second, third, fourth, fifth, sixth and seventh days of our trip will be no less interesting — do not switch! 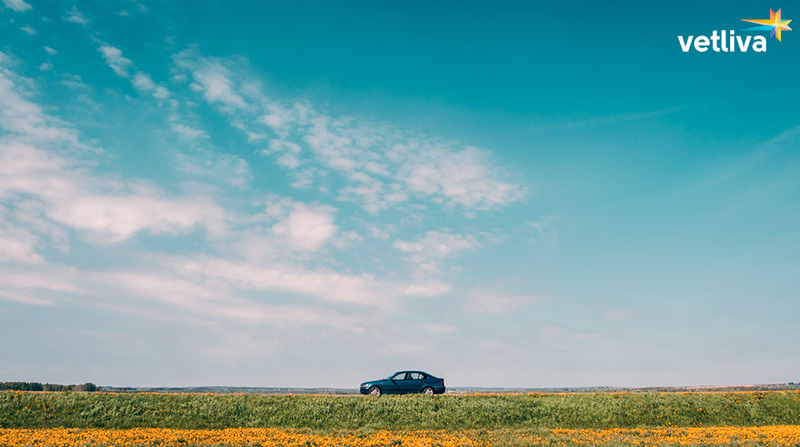 Our journey around Belarus begins in the small town of Chechersk in the Gomel region. Of all the settlements in the vicinity of Gomel, it is probably the most amazing! Some interesting facts about Chechersk:

An interesting fact from VETLIVA: in fact, in Belarus there are a lot of ancient beautiful cities and amazing towns that you can learn about from our article.

Chechersk is also interesting for its sights, and each is interesting in its own way. Despite the fact that it was raining and the weather was cool, we immediately went to get to know them. The first was the Chechersk Town Hall, located at the end of the main street. It is perfectly visible from any distance. 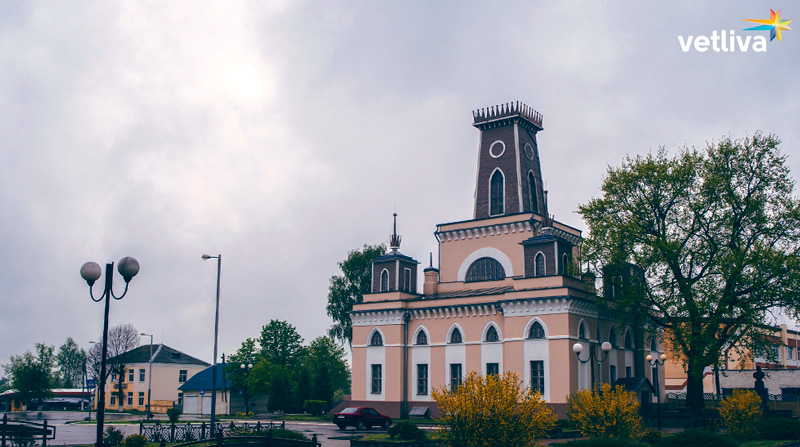 Town Hall in Chechersk: built in the second half of the 18th century. Classicism.

The city center is compact, so all its attractions are within walking distance. In the central square, what is typical for most cities, there is already the usual monument to Lenin and administrative buildings. There is also a monument-plane TU-124 (by the way, you can see something similar if you are wondering what to see in Gomel. Not so long ago, a monument SU-24 was erected in the city of Sozh near the P. Sukhoi University — we recall that the famous aircraft designer studied at the time in Gomel and here he found a dream of heaven.

An interesting fact from VETLIVA: by the way, this is not the only unusual monument in our country. We have monuments in honor of cartoon characters, monuments to condensed milk, and even a memorial designating the center of Europe!

Not far from the town hall there is another iconic attraction of Chechersk — Holy Transfiguration Church. The church is not only located inside the road ring, but the construction is absolutely round itself! 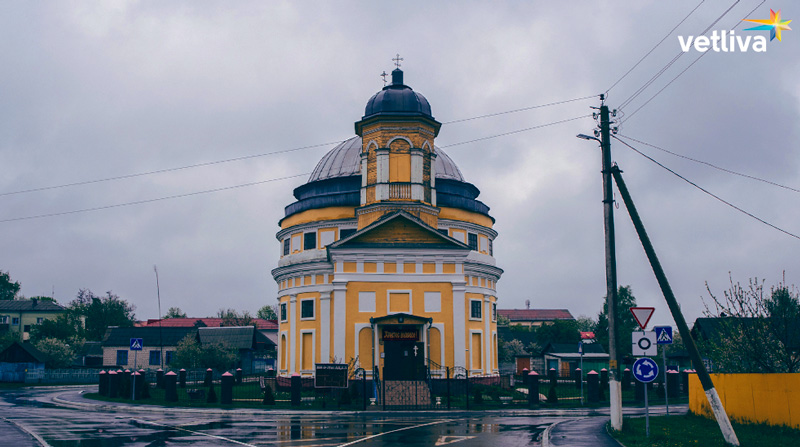 Holy Transfiguration Church was built in 1783. It has no corners.

Thinking about what to see in Belarus and travelling by car, be sure to include this temple in your route. The VETLIVA team was even lucky enough to be inside the church. Despite the fact that she is on a busy car ring, you involuntarily forget about it: peace and tranquility reign under her vault ...

An interesting fact from VETLIVA: this is not the only thing that strikes visitors to the sights of Chechersk. In the Holy Transfiguration Church is the icon "Descent into Hell" in 1678, which is older than the church itself! 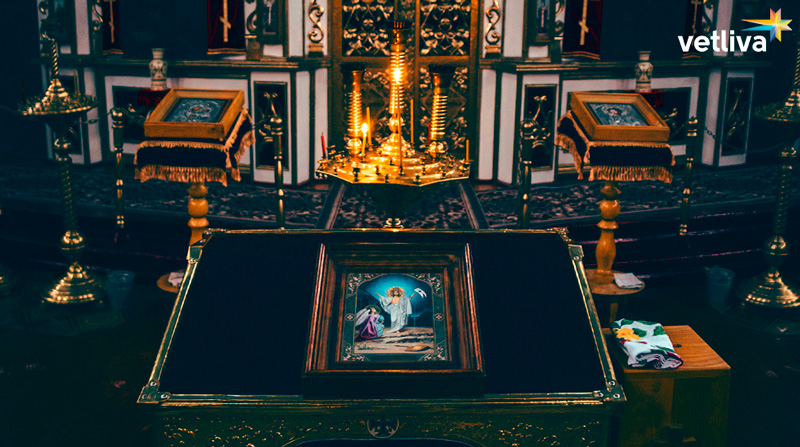 So, we answer the question of what to see in Belarus, and go to the village of Grudinovka.

Traveling around Belarus by car is always interesting because you notice unusual details. For example, on the way we met a lot of fishermen. This is because in the vicinity of the Tolstyh estate there was once a peat processing plant. One of the quarries left after it was flooded, and now everyone can go fishing here. Nothing supernatural: after talking with the local fisherman Vasily, we learned that the fish are of usual size, but the places are so picturesque that even foreigners come to hunt for local carp and crucian carp! (Fortunately, now this can be done without difficulty, especially thanks to a visa-free regime). 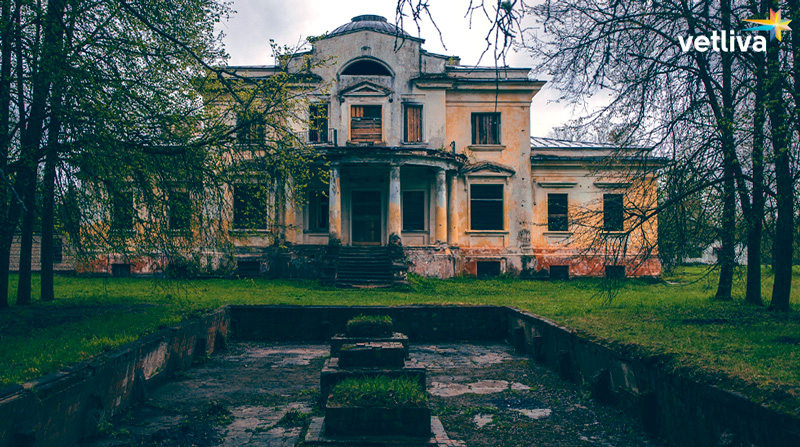 The palace and park ensemble of the 19th century. Now not in operation, abandoned.

There are no signs here, but you will immediately understand where to go. At the entrance to the estate we were greeted by a picturesque lake, beyond which there is a park. He still looks luxurious, especially the mighty oaks. We could not resist and took some cool photos! 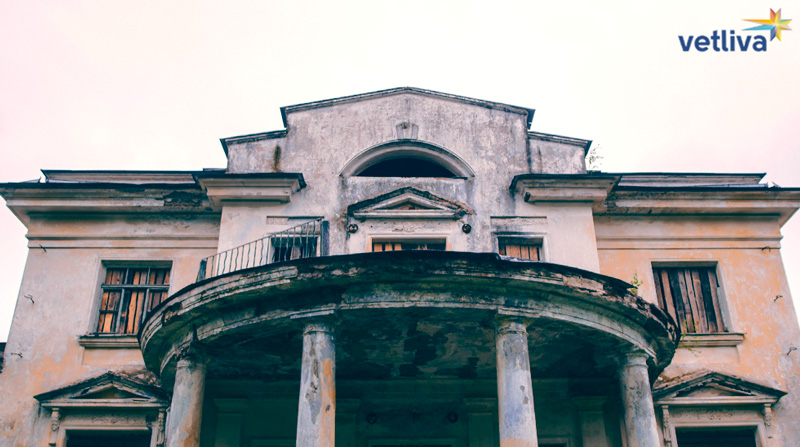 Oaks, birches, pines, spruce, thuja, Siberian cedar — once in the park more than 40 species of trees were presented! Opposite the entrance to the estate is a fountain that was once full of water. Now it is dotted with withered leaves...

The manor building itself is mothballed. We went around him and through the open window behind examined red flags and Lenin. This is evidence of a bygone era, when in the last century, the secondary school, the orphanage, and the sanatorium boarding school for children with rheumatism were housed inside the estate. On the ground floor there were showers and toilets, on the first floor — some common rooms, and on the third — living rooms. We noted that it was much brighter here than on the first two floors.

You can still imagine how ladies in magnificent outfits walk along spacious halls and rooms with gallant gentlemen, how couples go to the lake to take a romantic walk on the lake... It’s a pity that it will not be possible to return to its former greatness, but its testimony stands here to this day. 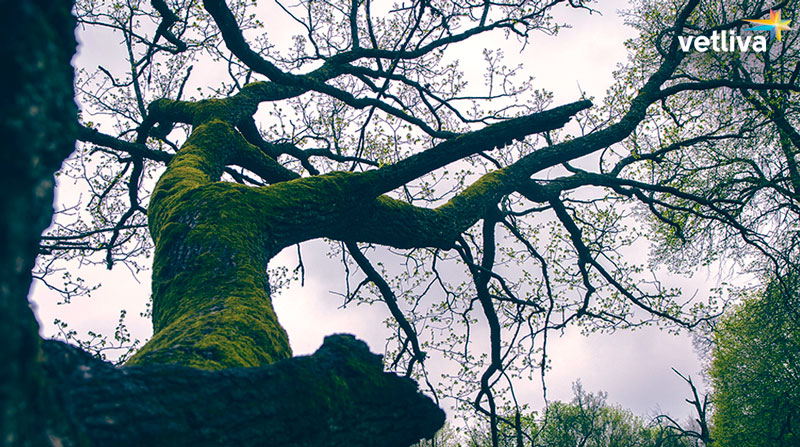 Having photographed the historical building from all sides, we set off on. Traveling through the cities of Belarus is wonderful because you never know where else you will meet beauty along the way: a forest stream, a colorful house with interesting architecture, an unusual church with beautiful architecture (we already talked about the top-10 of them in this article). The predominantly flat landscape of Polesie began to gradually replenish with elevations, which was impossible not to capture in photographs.

The manque capital of Belarus: what to see in Mogilev in one day

So, our eventful day and impressions ended with a visit to Mogilev. Even before going on a trip to Belarus, we noted for ourselves several iconic places that are obligatory for visiting. Each of them has its own unique "trick", which we will discuss below.

Lifehack from VETLIVA: we recommend that you travel no more than 300 km per day so that traveling to Belarus does not bother you much. In this connection, if you are planning to repeat our route, a selection of the coolest lodging offers will come in handy.

The main attractions of Mogilev are very compact, so they can easily be viewed in one day. The first person to meet us on the pedestrian street was the Stargazer and 12 constellation chairs around him. The only monument to the astrologer and astronomer in the world was created in 2003. Each person from the VETLIVA team found his chair and sat on it. What to do — it’s tradition!

In the evening, a bright ray of a searchlight hits the sky from the stargazer of the Stargazer. They say that it can be seen even from space! Even if those who saw him can be counted on the fingers. Probably, Mogilev residents simply want to believe in such an exclusivity of their sights. 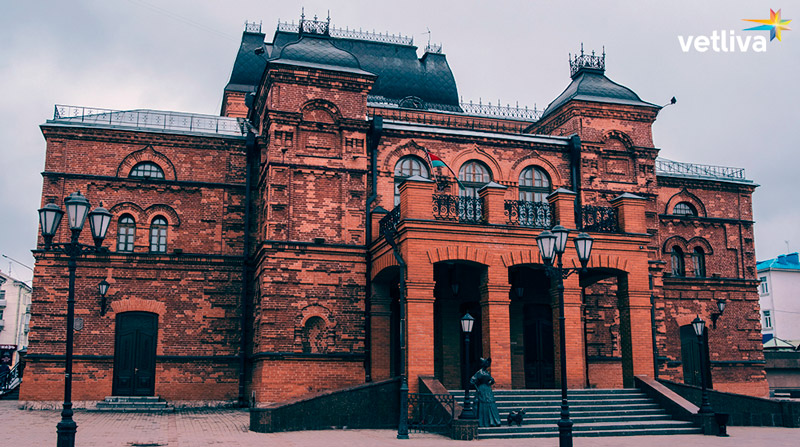 The Mogilev Theater is the only survived theater building of the 19th century in Belarus.

Our attention was riveted to the Mogilev Theater. Still, its bright brick walls are striking no worse than the “Red Church” (it honorably takes a place in the top 50 sights of Minsk). Unlike the Vitebsk and Gomel theaters, which we have to see further, it is older and does not have so many floors.

To the left of the theater, among the five-story buildings, a modest church hid. Frankly, we were surprised at such a neighborhood. 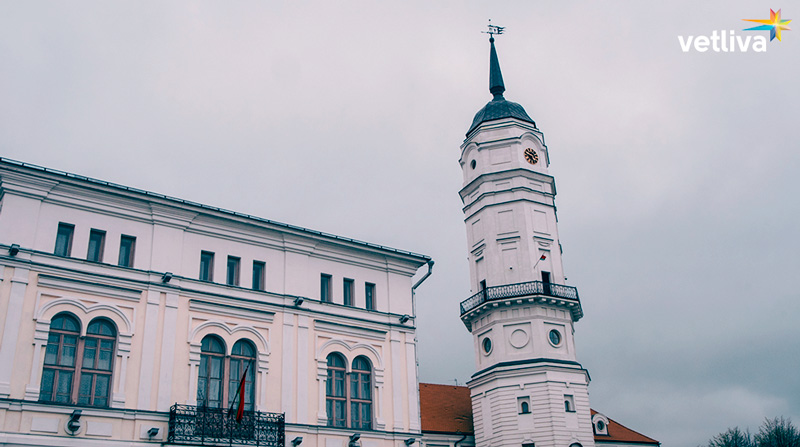 The town hall was rebuilt from scratch in 2008.

After another five minutes, we found ourselves at the snow-white building of the Mogilev Town Hall. It is decorated with watches, which, like the model of the Strana Mini Museum, have their own interactive "trick": three times a day, at dawn, at noon and at sunset, a mechanical figure of a trumpeter appears here and plays a melody. The trumpeter, by the way, has his own name — Magislav. It was chosen collectively by the whole city.

We were lucky to see and listen to Magislav too — a local star appeared at 20:42. We stood on the observation deck, listened to the sounds of the trumpet, looking at the busy city. All this gives an unforgettable experience! 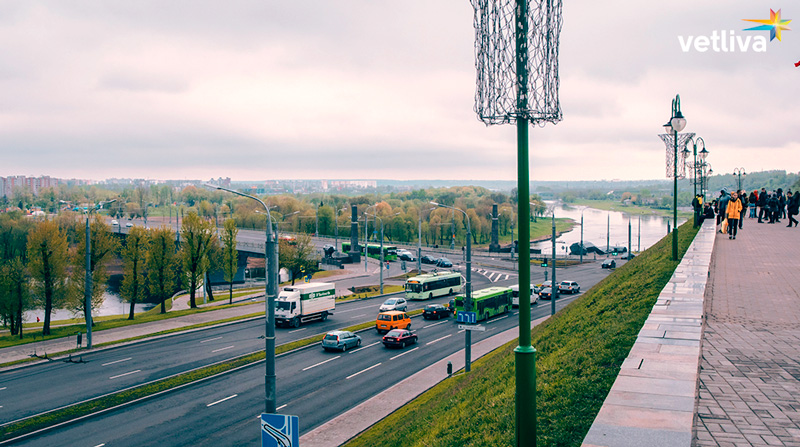 An interesting fact from VETLIVA: did you know that at one time Mogilev almost became the capital of Belarus? This city is fraught with many secrets, mysteries and interesting places. So study our guide to Mogilev, its sights and travel around Belarus with us!

So, for today the impressions were received to the eyeballs, and therefore we went to the side. In the end — a small spoiler of what awaits us tomorrow:

The epic adventure is just beginning — we promise that tomorrow will bring even more lively emotions and amazing discoveries!