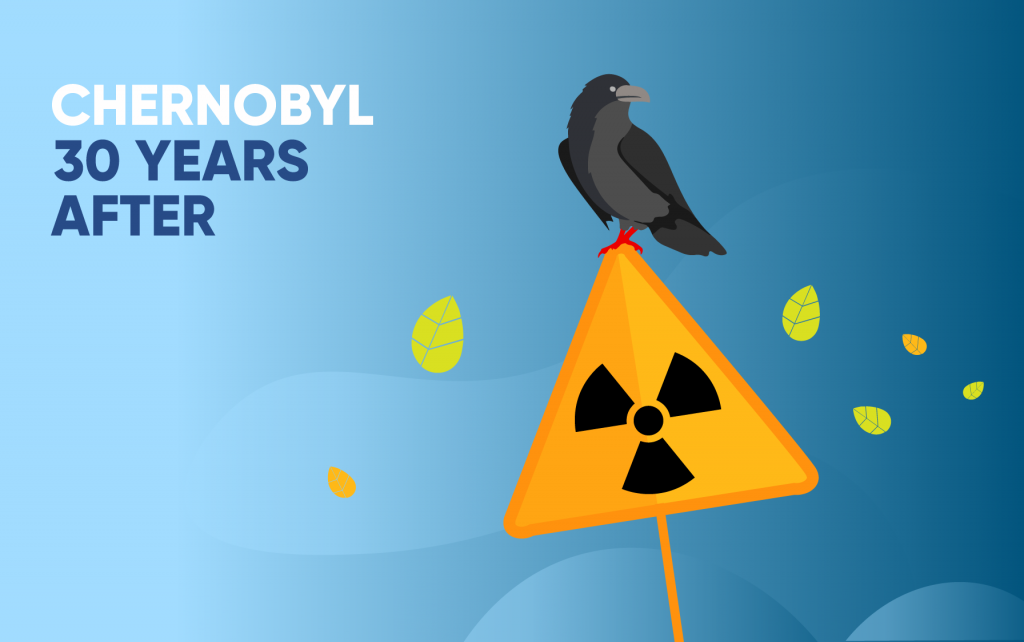 The tragedy of Chernobyl: what happened, the story of nuclear accident, facts about radiation. VETLIVA answers the most frequent questions about Chernobyl.

In 2019, the world was overwhelmed by an interesting new series from HBO: hundreds of thousands of people stuck to the screens, and everyone was in awe of the unusual plot twists and atmosphere of what was happening. The series was called "Chernobyl", and this word is not associated only with interesting TV-show on the post-Soviet space.

Today VETLIVA tells about what happened at the Chernobyl nuclear power plant, what the consequences were for the tragedy and is it possible to visit the ghost town and the exclusion zone.

The accident at the Chernobyl nuclear power plant 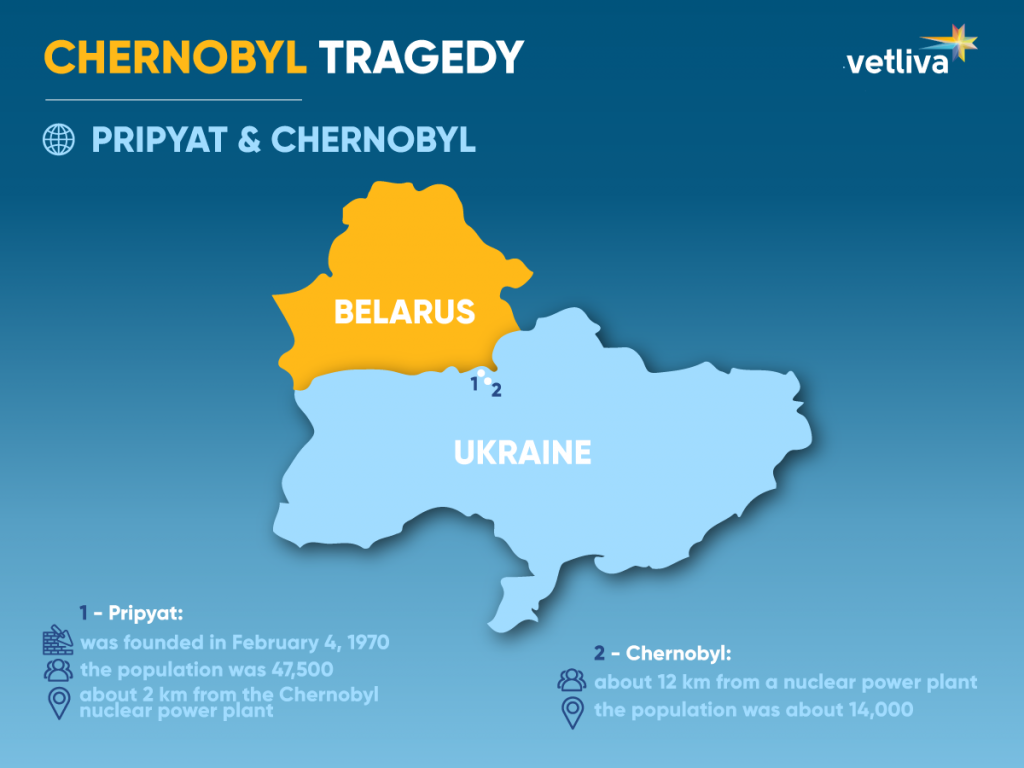 The city of Pripyat was founded in February 4, 1970. It was located on the border with Belarus on the territory of Ukraine and bore the status of the city of regional significance. The general reason for the founding of the city was the construction and subsequent operation of one of the largest nuclear power plants in Europe, the Chernobyl nuclear power plant, which gave Pripyat the title of nuclear city. According to the last census conducted before the evacuation (in November 1985), the population was 47,500.

History of the Chernobyl tragedy 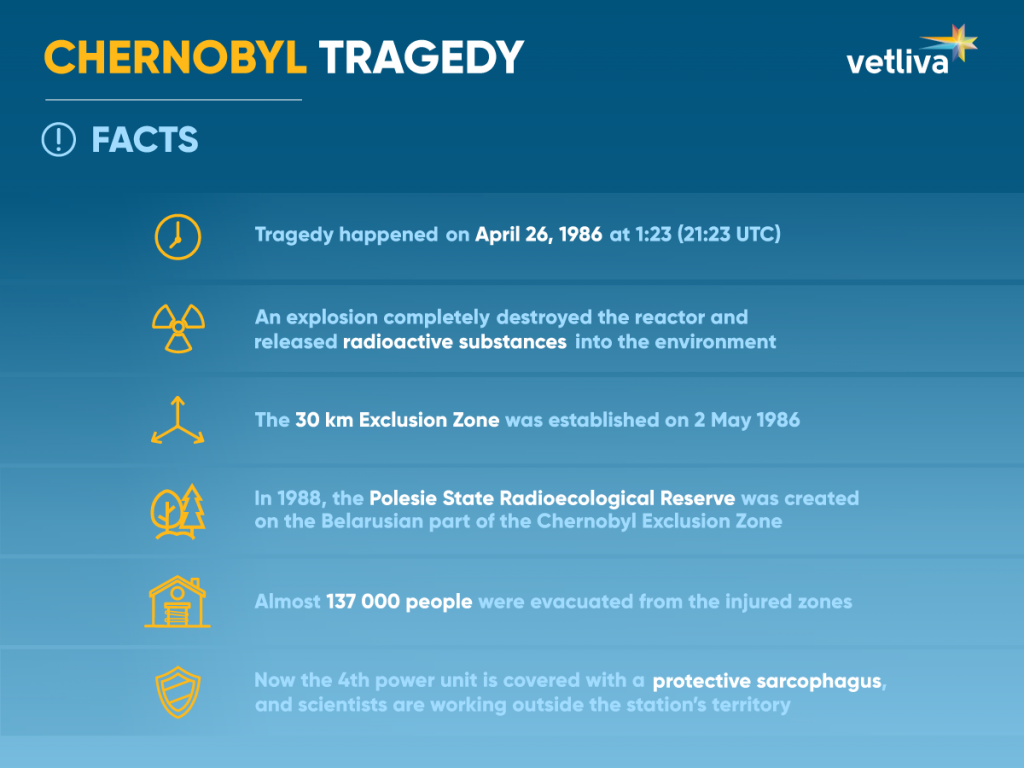 Nevertheless, few people remember that even before the tragedy of 1986, there was an accident with consequences on the territory of the nuclear power plant: September 9, 1982 in unit 1 there was a rupture of the graphite layer of the reactor, which caused a rather powerful burst of radioactive elements. The cloud of pollution was uncritically large, and substances in the atmosphere had a rapid half-life, so it took only 3 months to eliminate the consequences.

If we go back to the tragedy, which we were actually going to talk about initially, it happened on April 26, 1986 at 1:23 (21:23 UTC). There was an explosion that completely destroyed the reactor. The power unit building partially collapsed. Subsequently, the remains of the core melted, a mixture of molten metal, sand, concrete and fuel fragments spread over the sub-reactor rooms. The accident resulted in the release into the environment of radioactive substances, including uranium isotopes, plutonium, iodine.

Residents of Pripyat were evacuated on April 27, 1986, demanding to remain calm, to collect the most necessary things, not to take animals with them and to pass women and children ahead to special buses to nearby cities.

VETLIVA tells: the message about the tragedy was made public, so it’s not hard to imagine what the residents of the city felt at that moment. It sounded like this: “Attention, Dear Comrades! The city council of people's deputies reports that, due to the accident at the Chernobyl nuclear power plant, an unfavorable radiation situation is developing in the city of Pripyat...military units are taking the necessary measures. However, in order to ensure complete safety of people, and, above all, children, it is necessary to conduct a temporary evacuation of city residents to the nearest settlements of the Kiev region… we ask you to keep calm, organization and order during the temporary evacuation...”.

Reasons of the tragedy 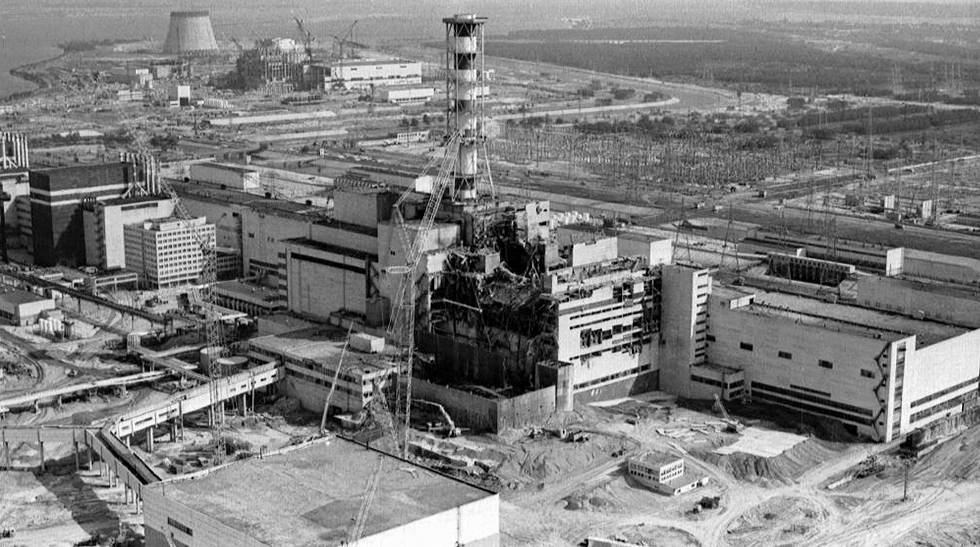 There are at least two different approaches to explaining the causes of the Chernobyl accident, which can be called official, as well as several alternative versions of different degrees of reliability. None of them was officially confirmed, so basically these are all speculations and conjectures, but the versions are different, like for example: 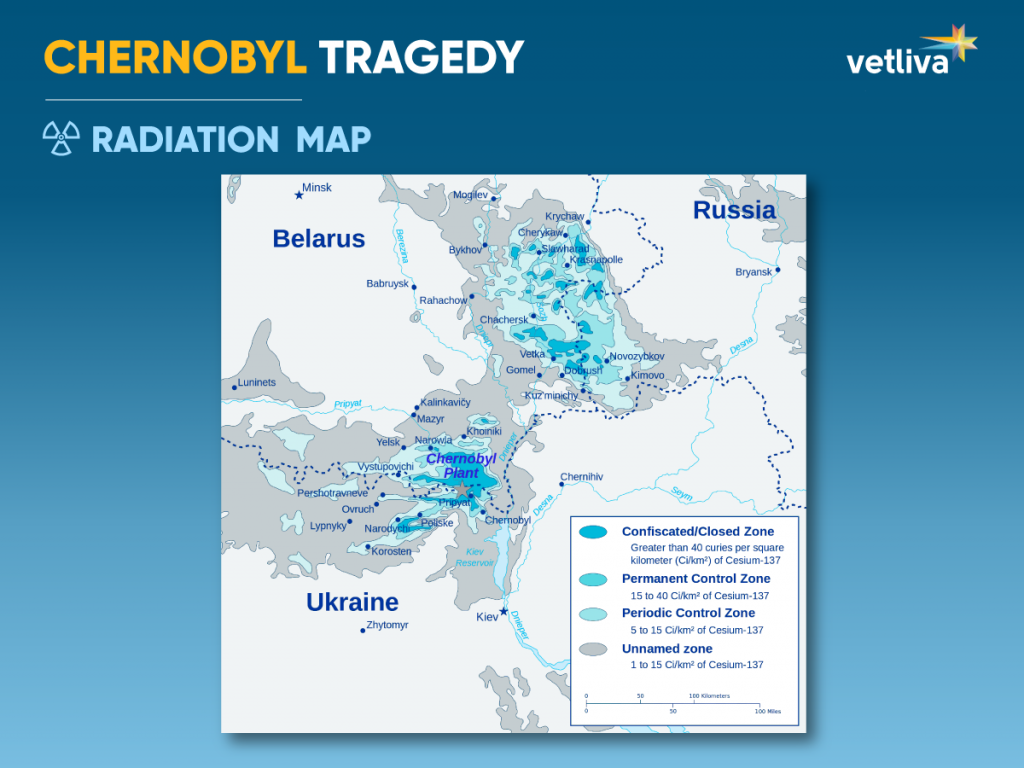 Such radiation emissions primarily affect the health of children: it is a question of weakening of the immune system, diseases of the respiratory system and the cardiovascular and nervous systems, as well as the thyroid gland. The Gomel region, which has undergone the greatest effect on the territory of Belarus, has suffered the most in this regard.

“It was very sweet in the mouth and we felt weak”, a 69-year-old resident of the Brest region says. "We were offered to take several families from those areas to help them cope with the consequences".

This tragedy is the best to show how people around the world should act in such cases: not to discuss history on the Internet and not to ask reposts of posts with condolences, but to provide real help. In such situations, real human nature manifests itself, which was demonstrated by the inhabitants of the USSR, for which we are very thankful.

In addition to obviously negative moments, there are some surprisingly good ones: due to the fact that it will only be possible to live and cultivate land in the territory of Pripyat only by the middle of this century (approximately), by that time the city will become the cleanest place on earth because of that it was not inhabited by people. 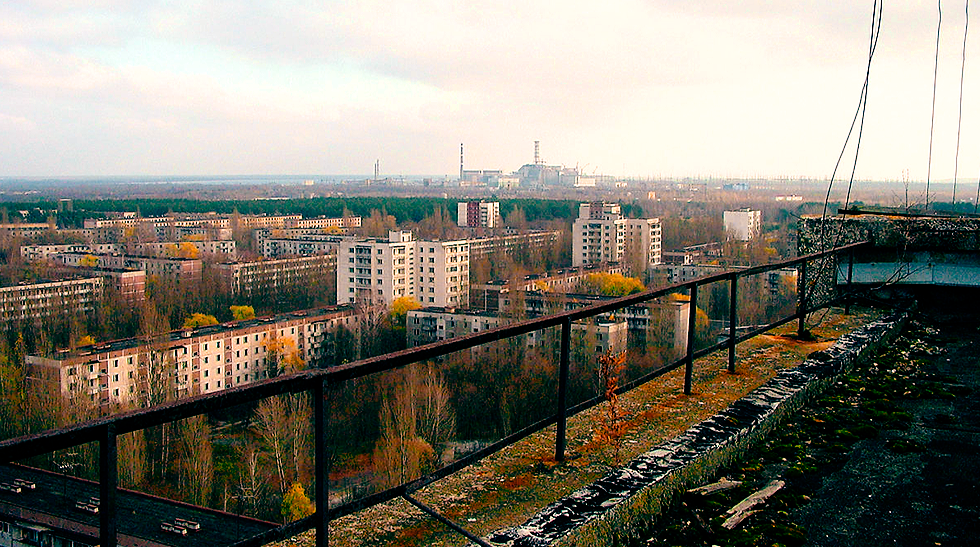 If we talk about the nuclear power plant itself, since 2016, two sarcophagi already cover the 4th power unit (the first one was built by the end of 1986, the second one was commissioned by 2018). Scientists are working outside the station’s territory, so you can’t actually live here but you certainly can visit the city.

A huge amount of tourists in Pripyat are illegal: many of them are inspired by a series of Ukrainian-made computer games “S.T.A.L.K.E.R”. Local enthusiasts are not trying to plunder the city (although there is nothing left to bear), instead they take unique photographs, take measurements of the radiation field, explore places that are not accessible on excursions, and even turn on the lights: in the winter of 2017, a group of guys from Poland lit up some lights in 30 years places of the city of Pripyat. About a year before, in October 2016, stalkers from Moscow, using LEDs brought with them, repaired and turned on the light sign on the building of the Palace of Culture "Energetik".

Can you visit Chernobyl? 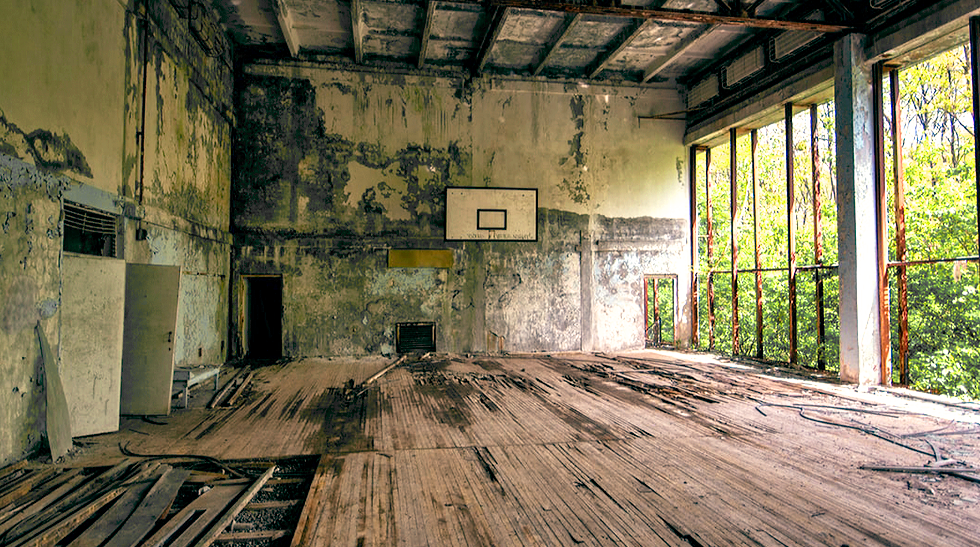 You can visit the Belarusian part of the exclusion zone in two ways: by finding a suitable tour with your own hands (Gomel is usually the starting point) or by contacting the Polesye Radiation and Ecological Reserve. This is not only a great chance to see the reserve itself, but their excursions also include abandoned villages, checkpoints and natural beauties that have arisen due to the lack of man here.

To visit the Exclusion Zone, you need to fill out a special form on the site of the Polesye Reserve, indicating passport details, and obtain a contract and pass to the territory (this applies to both Belarusians and foreigners — the rules are similar).

Entry into the Belarusian part of the exclusion zone, in contrast to the Ukrainian one, is allowed to everyone, and every house and point along and across can be explored. In the Ukrainian Zone, there will not be such an opportunity, and for the most part it will be a "guided tour from the front". However, on the side of our country there are no such memorable and widely appearing in the pop culture places, and the radiation here was weaker than in Pripyat itself. 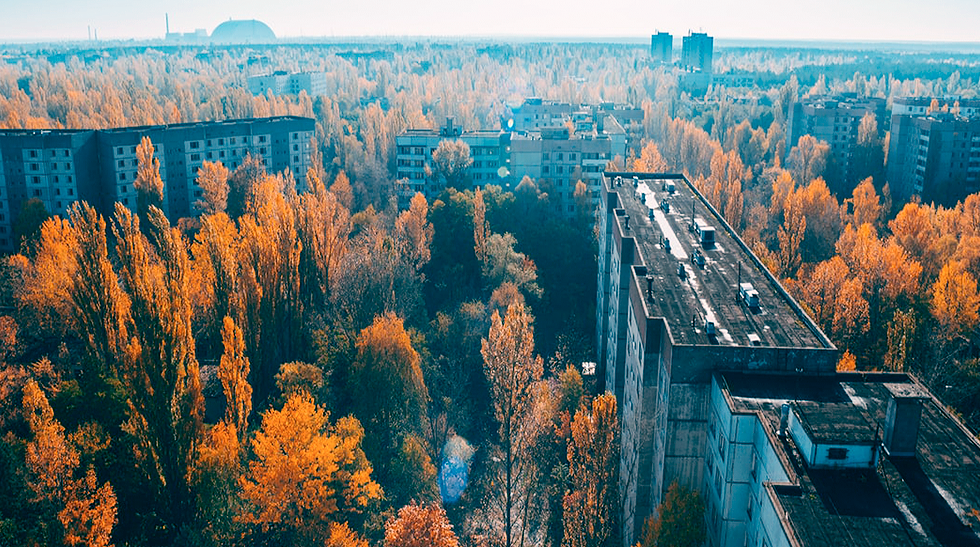 Ukrainian tours include visits to the Pripyat city itself: the kindergarten, deactivated Red Forest, the stele, the sarcophagus itself and its observation deck, hospital, city park and much more.

Therefore, if you have not visited the zone, start with the Belarusian part of it. And if you have already visited Ukraine, then local points can be added to the picture of abandoned open spaces.

VETLIVA notices: If you decide to go on a such kind of tour, it will be the best to book some sort of local hotels or apartments to have more time and opportunities to visit the Zone.

The legacy of Chernobyl

Despite the fact that the history of Chernobyl is considered to be an exceptional tragedy, it clearly demonstrates several positive points: a high degree of sympathy and empathy of people, the ability to preserve the history through the cinema, books and games. And if you have already visited the exclusion zone, how about visiting the Belarusian part of it?

Like this article, tell friends about us, read our Blog and remember the story with VETLIVA.