In Belarus, there is a classic phrase familiar to every child: “first, second and compote (fresh drink made of fruits or berries)”. The thing is that Belarus is very fond of a tasty meal, even in schools, students get for lunch the first course (soup or borsch), the second course (main) and compote (or any other light drink). Today we offer you our own menu consisting of Belarusian dishes, which VETLIVA strongly advises you to try when you first visit the country.

Holders are proud of traditional Belarusian cuisine. On hot summer days, this soup literally saves Belarusians from overheating and gives a lot of energy to continue working. The basic ingredient of the classic recipe is boiled and cooled beets. To it are added hard boiled eggs, chopped dill, cucumbers and radishes. All this is poured beetroot mixed with kvass and served with sour cream.

This is the oldest recipe of the Belarusian hot soup with a sour taste, which is prepared on soured flour. The name comes from the word “zhuraviny”, which means “cranberry”, as well as from the old Germanic root “saur-” (meaning “sour”). It was prepared on the basis of various flours: rye, oatmeal, wheat and even buckwheat — in a word, what they were rich with, it was used. First, the flour was diluted with water and left in a warm place for 1-3 days. Then the mixture was filtered and boiled until thick. After it was seasoned with toasted lard and onion and served with a boiled or baked potato.

What a soup without bread! Almost every foreign guest praises the bread of Belarus. In ancient times, it was baked in real ovens without the use of yeast. The dough was sour on “roshchyn” — a small portion of dough from the previous baking. The composition consisted of rye flour, salt and water, and literally kneaded it with his fists. Before going to the oven on the prepared piece of dough, they always painted a cross. A loaf is considered perfectly baked when the steam from it goes straight up. This bread you cannot try abroad!

VETLIVA advices: you can cook all the dishes that you see in this list by yourself or try it in one of the local restaurants: in our guides in the regional cities of Belarus — Minsk, Brest, Grodno, Gomel, Vitebsk — we told about such restaurants!

This is perhaps the most recognizable Belarusian dish. Fritters of grated potatoes with onions and sometimes eggs, despite the simplicity of preparation, have an amazing taste. There are many versions of this recipe in other countries, but Belarusians are the authors of the original. As a rule, pancakes are baked in clay pots or fried in a cast-iron pan and served with sour cream or butter.

Another dish that Belarusian cuisine is famous for is dumplings. To prepare them, first manually rub on the smallest grater (yes, Belarusians are hard-working people) onions and potatoes. Then the mixture is squeezed through cheesecloth and after it is added an egg, salt and some wheat flour. Further, balls of diameters of about 5-6 cm are formed from the dough and are boiled in salted water. In Belarus, dumplings are served with sour cream and sprinkled with chopped fresh herbs.

The cult dish of the national cuisine of Belarus is something of a meat sauce. It is rather a festive treat, which was previously based on homemade sausage and bread kvass, but served with pancakes or a side dish.

VETLIVA reminds: to arrange a full-fledged gastrotour, do not forget to stay in Belarus for a couple of days (visa-free regime!). So choose your best variant and take a rest!

Those who are not familiar with the peculiarities of the national Belarusian cuisine, this name brings affection. But in fact, this is the name of the hot drink, which is based on alcohol or vodka with the addition of honey and spices such as cloves, cinnamon, nutmeg, black and red hot peppers. The tincture is strong, but very fragrant. We recommend you to taste that classic!

The famous Belarusian drink can be both cool and hot. The first was prepared to quench their thirst in the hot summer and after the bath, and the second — to warm themselves in the winter and also to get rid of a cold. In both cases, it consisted of honey, water, hot peppers, cloves, bay leaves and nutmeg.

VETLIVA tells: many dishes can be tasted as part of an excursion to real Belarusian towns and ancient cities! In Dudutki, for example, try whatever you want and relax with a national Belarusian flavor.

The dessert of the national cuisine of Belarus is prepared from fresh berries (blueberries, strawberries, cranberries, viburnum or mountain ash). They are boiled over the fire, honey is added and wheat flour diluted in water. And then boil to the consistency of jelly. Served with pancakes or white bread.

This is originally a Belarusian dish, someone mistakenly calls them pancakes. However, there is a significant distinctive detail: while pancakes are a separate dish, the nalistniki are designed specifically for “packing”, as a rule, cottage cheese filling. The egg dough is bland and tasteless, and the nalistnik is thin, non-porous and elastic. In this case, the filling is placed exactly in the center and then tightly covered with edges. 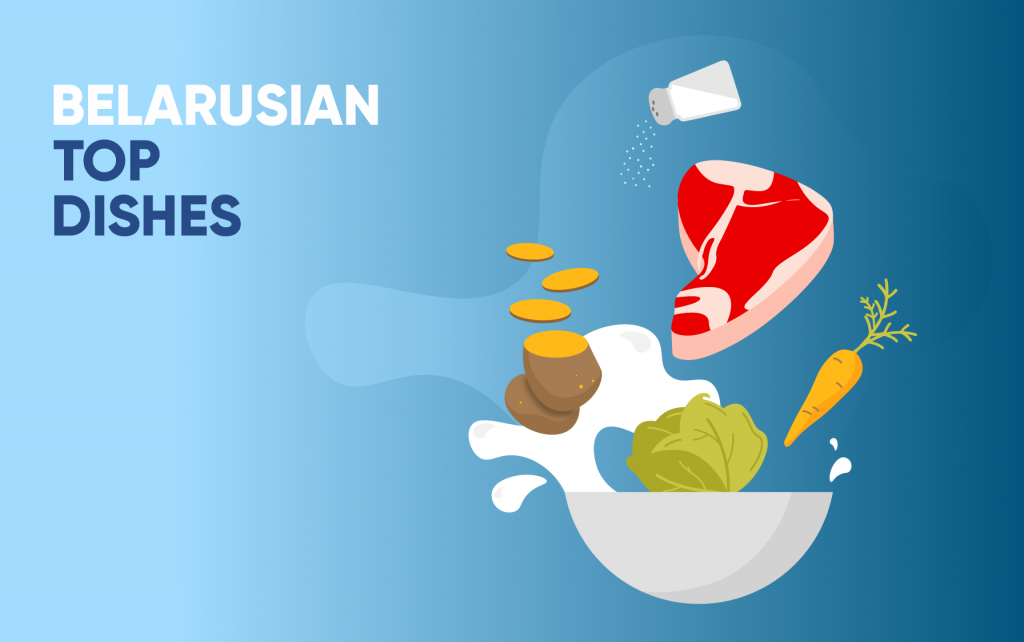 Have you already drooling saliva? We have yes! After all, all these dishes are truly unique and beautiful, you want to try everything at once. Go to Belarus and try all these national dishes and take with you only the most delicious memories.

Tell your friends about the article, put likes, read our Blog and bon appétit from VETLIVA!

Belarusian national holidays: what, where, when?