Mir Castle has been on the UNESCO World Heritage List for many years. This beautiful monument of architecture and history is located near the village of Mir, 87 km from Minsk. We brought the castle to our top sights of Belarus, but only lifted the veil of secrets.

Secrets of the Mir Castle

Today VETLIVA shares with you incredible stories about Mir Castle, the facts about its construction and ... ghosts? Collect your guns, turn on Deezer — we are going to the Mir Castle!

According to the ancient legend, the place Mir received its name from the word "emir" when the Tatar detachment was in this place. There is another version — the name “mir” from the border of Lithuania and Russia passing by has gone. The castle itself began to be built in the 16th century as the patrimonial residence of the Marshal of the Grand Duchy of Lithuania — Ylin Ilyinich. At the very beginning, the castle was a small square fortress with four corner towers and a fifth tower above the entrance gate. 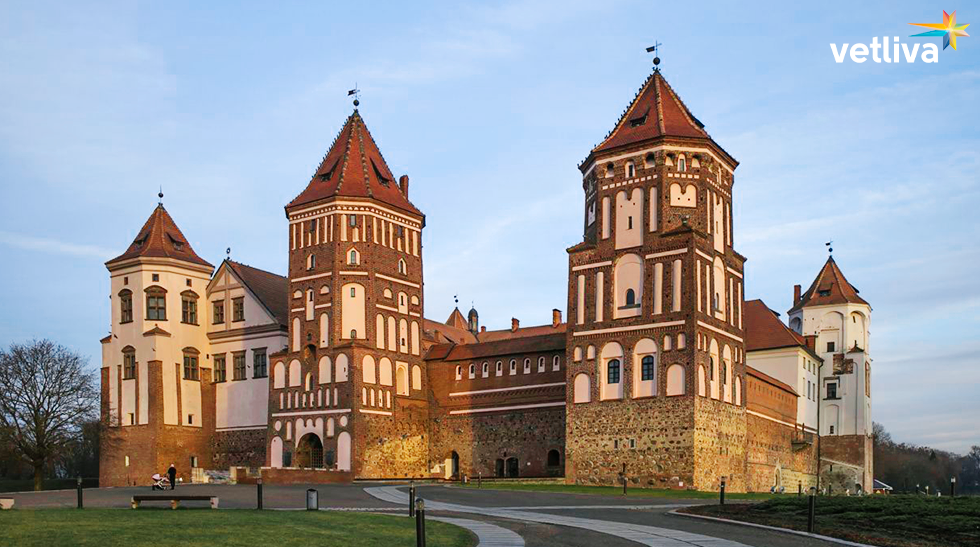 And why do you need a castle?

Not everything is clear for the purpose of building the Mir Castle. There is an opinion that the fortress was erected only for reasons of prestige, since the town of Mir at that time was a fairly quiet place.

But at the same time, the thickness of the castle walls, in the lower part of which the loopholes are cut, reaches 2-3 meters. In addition, the northern and western walls had fighting galleries. All this indicates a good defensive ability of the fortress in the event of hostilities. 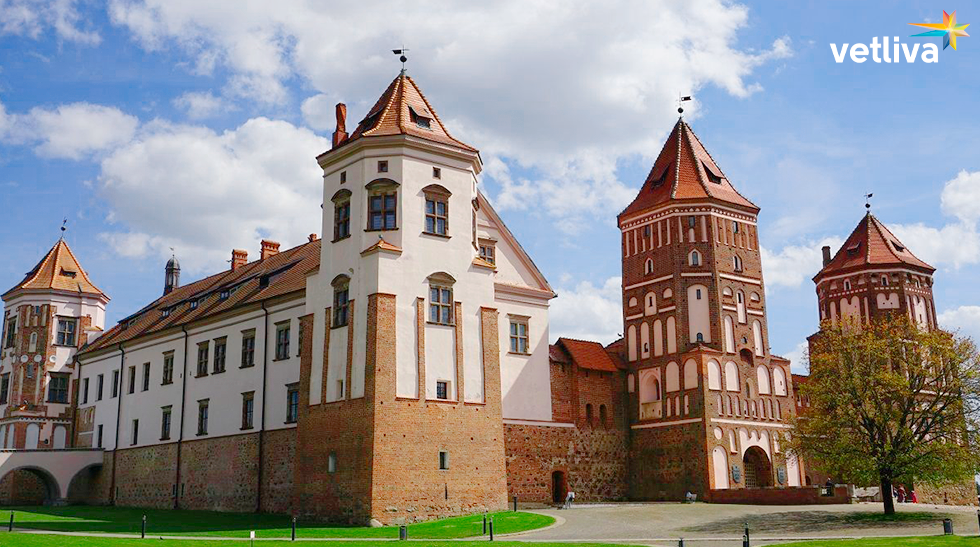 And today the Mir Castle is surrounded by many legends that create an atmosphere of mystery and, like a magnet, attract tourists.

Where is my spoon?

The Museum of the Mir Castle has a lot of original paintings, pieces of furniture, weapons, tapestries from the beginning of the mid-18th century, which give comfort to the restored interiors of the main halls: “Dining room”, “Portrait Hall”, “Senya”. Here is a sample of this Slutsk belt and authentic cutlery. By the way, not everyone knows that the owner of the castle had his own carved wooden spoon, decorated with gold inserts and precious stones. Interestingly, after the meal, the prince licked the spoon and put it in his boot so that if necessary the cutlery was always at hand. 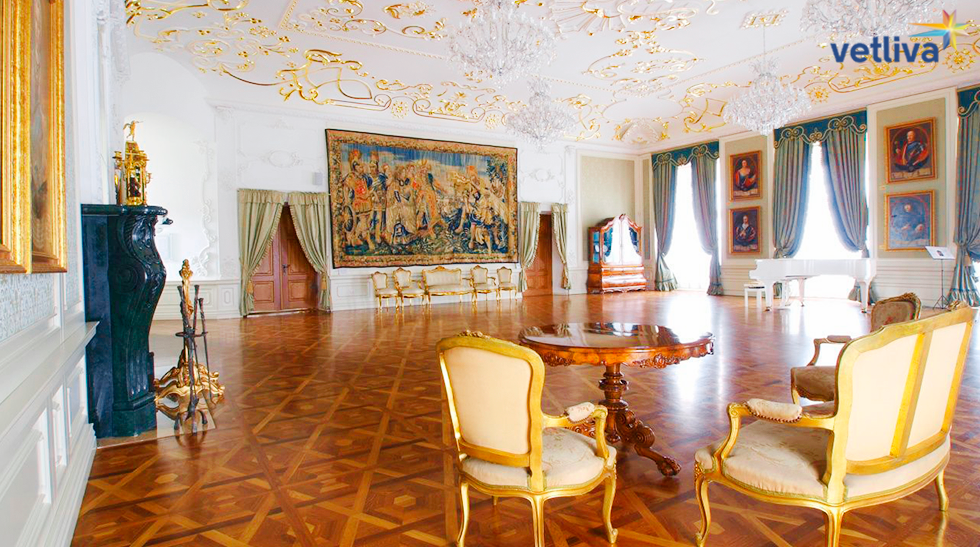 VETLIVA warns: beware, there will be many stories about skeletons and ghosts! Belarus, among other things, is famous for its castles and restless souls. We have already collected a complete list of such stories for you, and now we will tell you more about Mir Castle.

Today, near the castle there is a picturesque man-made lake. But when a beautiful apple orchard grew up there, Prince Nikolai Svyatopolk-Mirsky, the owner of the estate in Mir, ordered to dig up the lake and cut down the garden.

It was spring, the trees bloomed magnificently, according to popular belief, it was a great sin to cut flowering trees, there would be misfortune and a curse, and they refused to cut the garden. The prince did not want to waste time on national signs, and he hired alien people to cut the garden.

When the lake was being dug out, there wasn’t even a day without misfortune: many people died, including the son of local witch. According to the legend, this guy's mother cursed the lake, “Let this lake take as many souls as many trees in the garden bloomed”, her parting words were.

So the legend about an apple orchard was born. 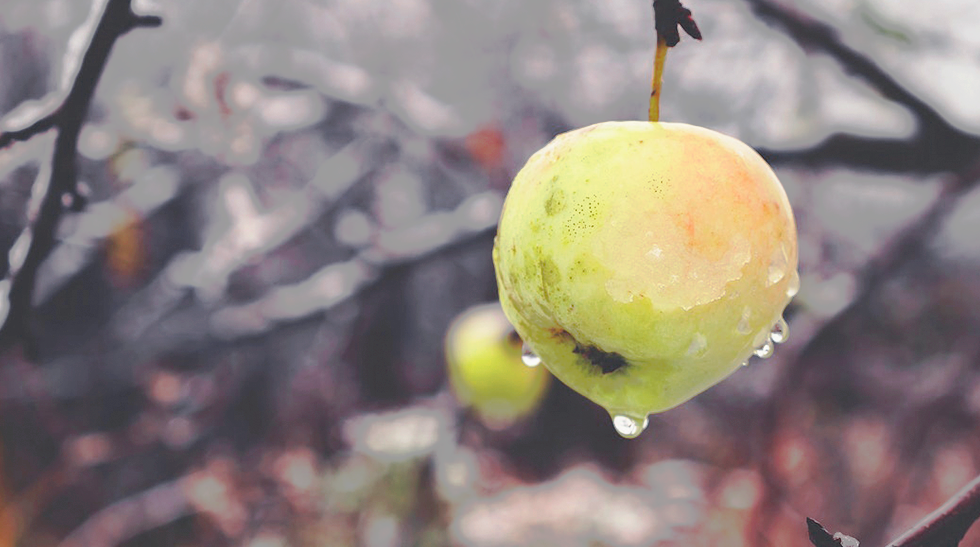 The most famous legend about the Mir Castle says that in the era of the Radziwills, an underground passage was dug between the Mir and Nesvizh castles. They say that a carriage drawn by a troika of horses could freely ride along it. If this legend is confirmed, the Radziwills can be considered the first builders of the medieval metro.

Princes are having fun too

In the basement they used to store various drinks. It turns out that the Radziwills had their own glass manufactory. That is why, besides the huge wooden barrels, there were bottles of various fanciful shapes on the shelves. Here is the custom: at the birth of a child, rich people buried an oak barrel with alcohol in the ground. And they dug it only on the occasion of some important date — the age of majority or wedding. One spoon of such alcohol was enough to change and improve the taste of any drink. 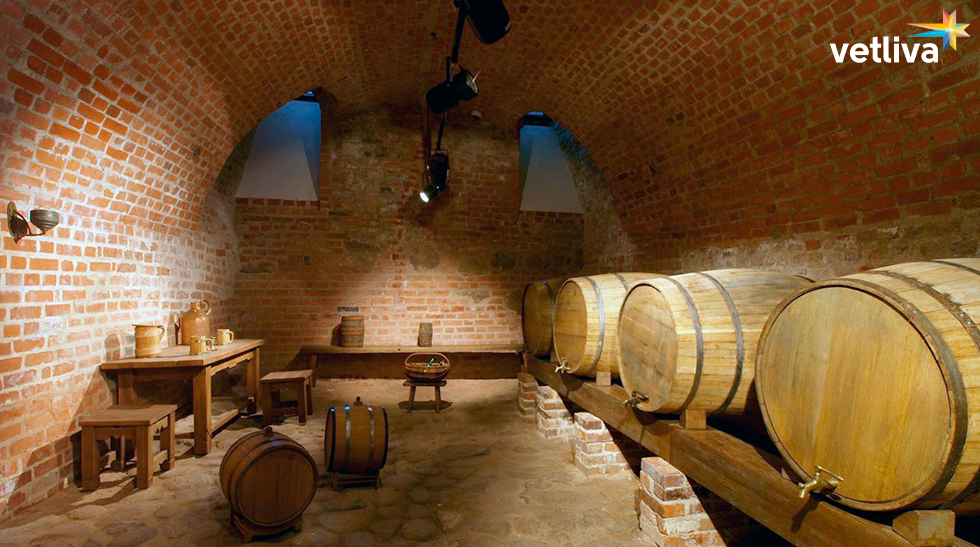 In white dress, but not the bride

The ghost of the White Maiden can be called the most beloved and revered by guides, restorers and museum workers. Young princess Sofia Svyatopolk-Mirskaya drowned at the age of 12, and then she was much more often called just Sonia. So many affectionately call the ghost now.

The ghost behaves modestly and does not bother anyone, moves silently and tries not to be seen by people. So there are no many witnesses, by the way. The absolute majority of them claim that she looks like a small vertically stretched white cloud, or — if you come closer — like a young translucent girl dressed in long white clothes.

However, it is never possible to examine it in every detail — this ghost is very shy and, having noticed people, disappears immediately. Sonechka appears most often either in the gate tower, which, by the way, is also called “white”, or near the family burial vault where Sofia Svyatopolk-Mirskaya was buried. And they see the White Virgin most often in spring or early summer, when princely graves are flooded with meltwater. Perhaps this is the cause of her anxiety?

During the restoration of the castle, which was carried out under Mikhail Svyatopolk-Mirsky, two skeletons were found at the opening of the floors, later buried by order of the owner in an Orthodox cemetery. According to legend, on New Year's Eve you can hear the clank of swords, and then a long moan. 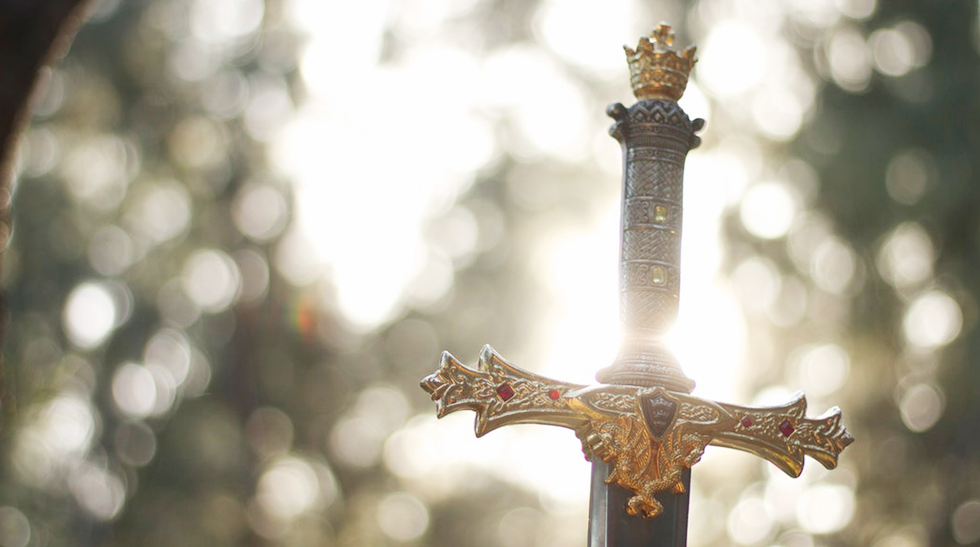 On the south side of the castle a small stone is clearly distinguished, resembling the head of a ram. It is claimed that if this stone falls, the Mir Castle will collapse to the ground and no one will ever restore it. Now it is difficult to explain the purpose of this mysterious symbol. He could be an image of a holy lamb. Among the many legends of Christian origin, there is a legend about God accepting the sacrifice of Abel, who with humble prayer gave his beloved lamb. For this the heavenly light descended upon the sacrifice.

Or maybe it is a magic sign. According to the pagan beliefs of our ancestors, at the beginning of construction, the magician took the measure from the head of a living creature (in this case, the measure was taken from the head of the ram), found a stone, hewed to measure and built into the wall. Then the animal, deprived of its shadow, died and became a ghost. It was supposed to roam around the castle and protect it from all sorts of enemies. 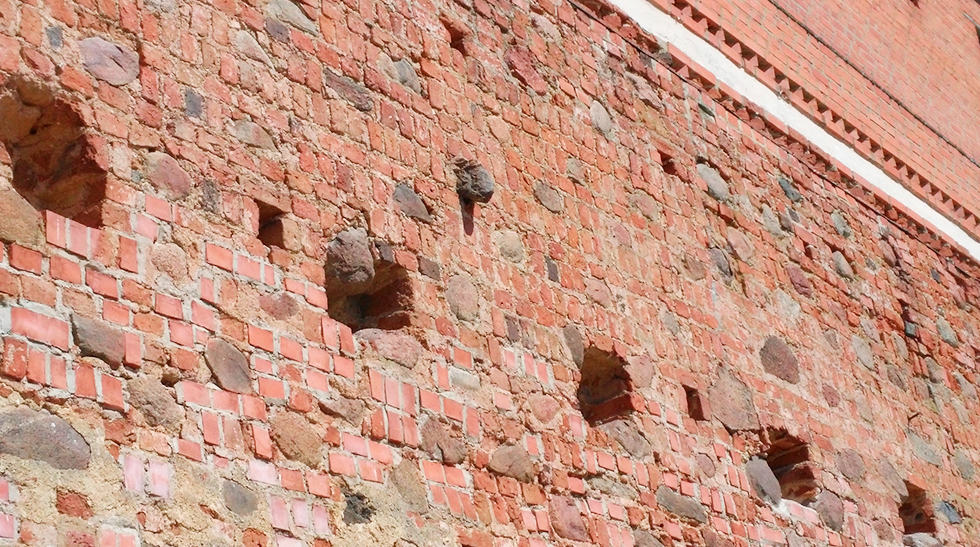 From the documentary evidence of the past years, information was taken that Mir Castle was visited by the Polish King Augustus on an official visit. In honor of this event, a magnificent dinner was arranged, at the end of which the guest get a surprise.

Radziwill invited the king to visit the family treasury, which was located in the dungeons of the castle. According to the stories that have come down to us from the past, they say that when the guests entered the box, they were temporarily out of speech. The underground crypt was simply strewn with jewels. There also stood, the size of a man in height, the twelve apostles poured out of gold and silver.

Many centuries have passed since then, but even today, the treasures of the Mir Castle did not give rest to the “black treasure hunters”, which caused irreparable damage to the palace and castle complex and its environs.

During the war, the Germans also searched for gold in the castle. But unsuccessfully! 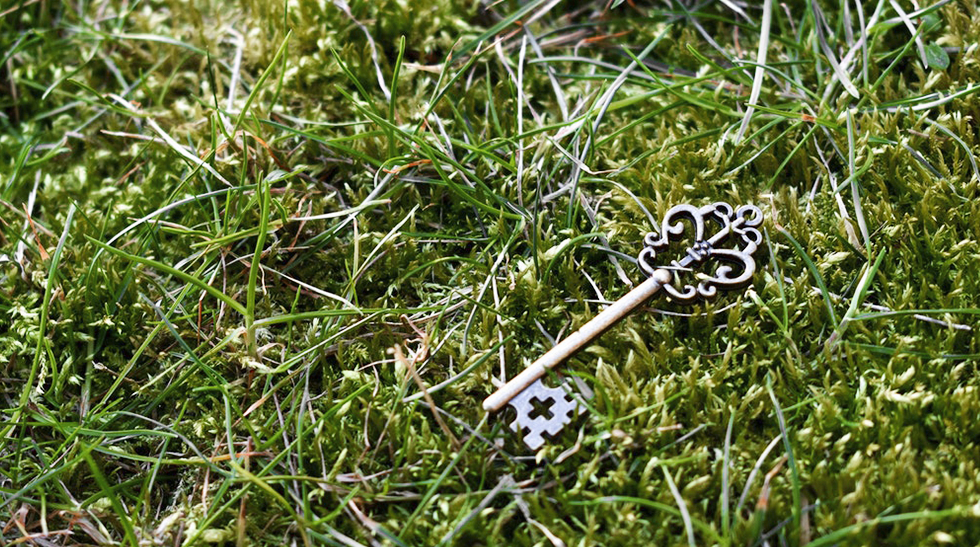 10 secrets of the Mir Castle: continue to search for answers

Secrets are secrets, so we, of course, can not tell you that the mysterious passage must be sought for the 3d picture on the left in the fifth hall ... Oops! Let's do this: look for answers to all the questions yourself. We can help you by offering an amazing tour to the Mir Castle, and then everything depends on you!

Put likes, share with friends, read our Blog and reveal secrets with VETLIVA!

Belarusian national holidays: what, where, when?