The monument to Maksim Gorky in Minsk

The monument to Maksim Gorky in Minsk 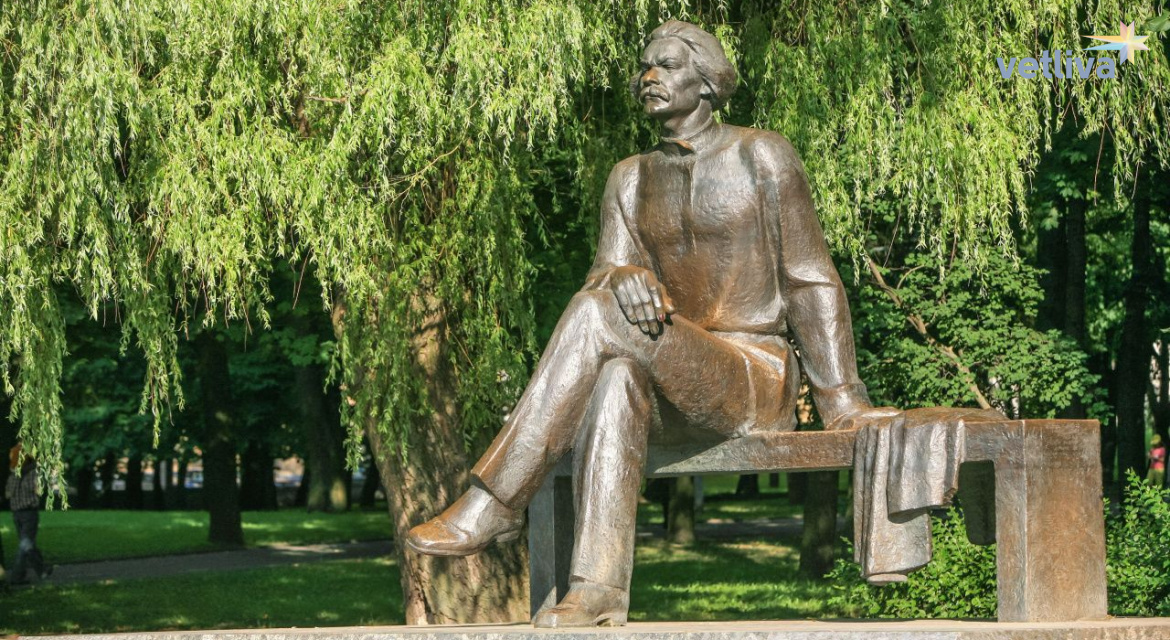 On a bench in the park

The park named after Maksim Gorky is an especially beautiful and cozy park in Minsk. The most significant events in the open air take place here. In the park there are a lot of park amusements: a Ferris wheel, hire of bicycles, etc. In summer there's not an inch of room: Minsk residents and visitors of the capital walk slowly, eat ice-creams, children play, somebody jogs, practises yoga, does exercises…

Maxim Gorky sitting on a bench in the middle of the Park, overlooking the river Svisloch, watches thoughtfully all of this.

The bronze sculpture of Maksim Gorkysitting on the bench was grand opened in 1981. It is no concidence that this capital attraction has appeared in the Park of the same name. The sculptors I. Misko, A. Zaspitsky, N. Ryzhenkov and the architect O. Trofimchuk created an image of a thoughtful Russian writer in this monument. It is no coincidence that the Park is named after Gorky.

Life under a pseudonym

Maksim Gorky created both for adults and children. A hard fade fell to this talented person’s lot almost left him alone. Gorky lost his parents early, he had to work hard and earn himself for a piece of bread.  For a long time Maxim Gorky was far from the homeland, life did not spoil him, maybe that's why he chose such a pseudonym for his creativity, but his real name was Alexei Peshkov.

It is interesting that the Russian classic liked works of the two great Belarusian literary men, Yakub Kolas and Yanka Kupala. Gorky learnt their works; he even translated one of Yanka Kupala’s poems into Russian. Moreover Maksim Gorky was fond of science, and that is why he was chosen as an honorary member of the Belarusian Academy of Sciences. In honor of Maksim Gorky were called a street, drama theatre and library in Minsk. Thereby Belarusians reciprocated to the Russian writer, remembered his genuine interest in Belarusian culture and science.

In spite of populousness in summer in the Park named after Maksim Gorky you should take a stroll in shady alleys, visit the Russian writer and leave a bouquet of flowers in memory of him. It is possible that your travel itinerary associated with his name will continue in the evening; for example, you will visit one of performances in the theater of the same name, or go to the library at one of these events, or stroll down the street named after Maxim Gorky.

In any case your journey won’t be boring and monotonous, because Minsk offers attractions and excursions for all tastes. The Belarusian capital can admire with unknown milestones in its history.  Minsk is multifaceted and diverse; we remember those who made a worthy contribution to the development of literature and science.