The summer Amphitheater in Vitebsk

The summer Amphitheater in Vitebsk 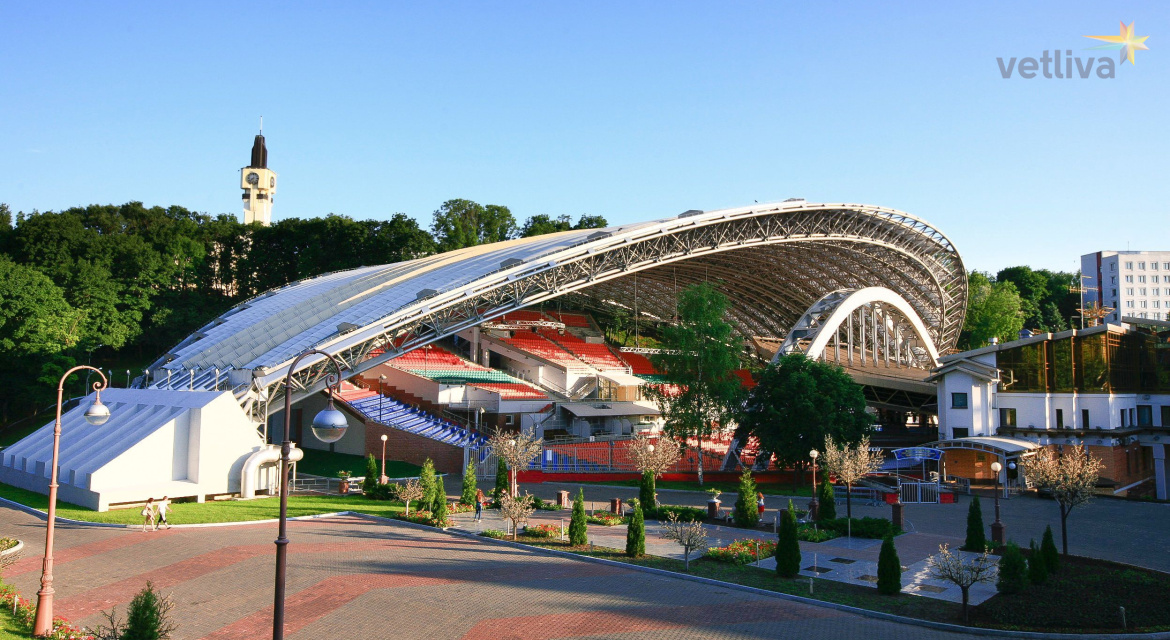 The idea of creating a large-scale venue for concerts under the open sky was born in May 1987. Such a terrace was necessary to organize the all-Union festival of Polish song, a kind of prototype for the "Slavic Bazaar". That outstanding project was developed by professionals of the Association "Vitebskgrazhdanproekt" under the guidance of the architect V. A. Babashkin.

It was decided to build an amphitheater in the valley, or rather in the hollow of the stream, its slopes were supposed to protect the concert venue from city noise. The construction of that facility was completed in quite a short period of time, only six months after it had started. In the summer of 1988 the first concert program was held there.

Since 1992 a famous annual festival called «Slavonic Bazaar in Vitebsk» was organized in the amphitheater. The stage area of the theatre had the opportunity to host many famous performers of the CIS.

In the summer of 1998, during the "Slavonic Bazaar", the theater was visited by the mayor of Moscow – Yuri Luzhkov. He proposed to build a roof over the amphitheater, which would protect the area from bad weather. The planned construction was immediately dubbed as  "Luzhkov’s cap" in the people. However, the proposal of the mayor of Moscow had not been implemented for a long time.

In 1999, the building has undergone some renovation. The central row of the audience hall was raised by three meters, and the wooden benches were replaced with plastic seats. The third floor was finished in the building for actors.

Two years later, in 2002, the amphitheater was reconstructed once again: another floor was added to the building of dressing rooms. Besides, it was equipped with a new cafeteria for actors. The opening ceremony of the festival was attended by the Presidents of the Russian Federation, Belarus and Ukraine.

In August 2006 a project for the next fundamental reconstruction was developed. It was decided to increase the number of seats to 6200, and to erect a roof over the auditorium. So the construction works had been finished by July 2007.

A well-designed metal structure is 120 meters long and 25 meters in height. It certainly covers the whole audience from bad weather, and the auditorium, in turn, became more spacious. The roof has been successfully tested by a major load of 700 tons after completion of the construction.

In general, summer amphitheater consists of three parts: the tribunes, the stage for performances and, therefore, the roof, which was constructed during the recent upgrade. Massive rostrum is divided into ten sectors; the central one is considerably raised above the others. The part that was designed for actors is a four-storey building with a stage and a total area of 430 m2. There are also dressing rooms for actors, as well as rooms for administration, technical rooms and a cafeteria under the name "Maestro" for the participants of the festivals.

Modern sound and lighting equipment was established in the amphitheater.