Around Belarus in 7 days - second day

Around Belarus in 7 days - second day

Belarus travel guide VETLIVA continues the series of articles "Around Belarus in 7 days". We sent a group of our staff to the expedition.

Let's remind, that we have a task to go through all Belarus by car in 7 days. In the previous part our team visited Chechersk and Mogilev and started its journey from Gomel. What was our first day of travel, you can learn from this link. 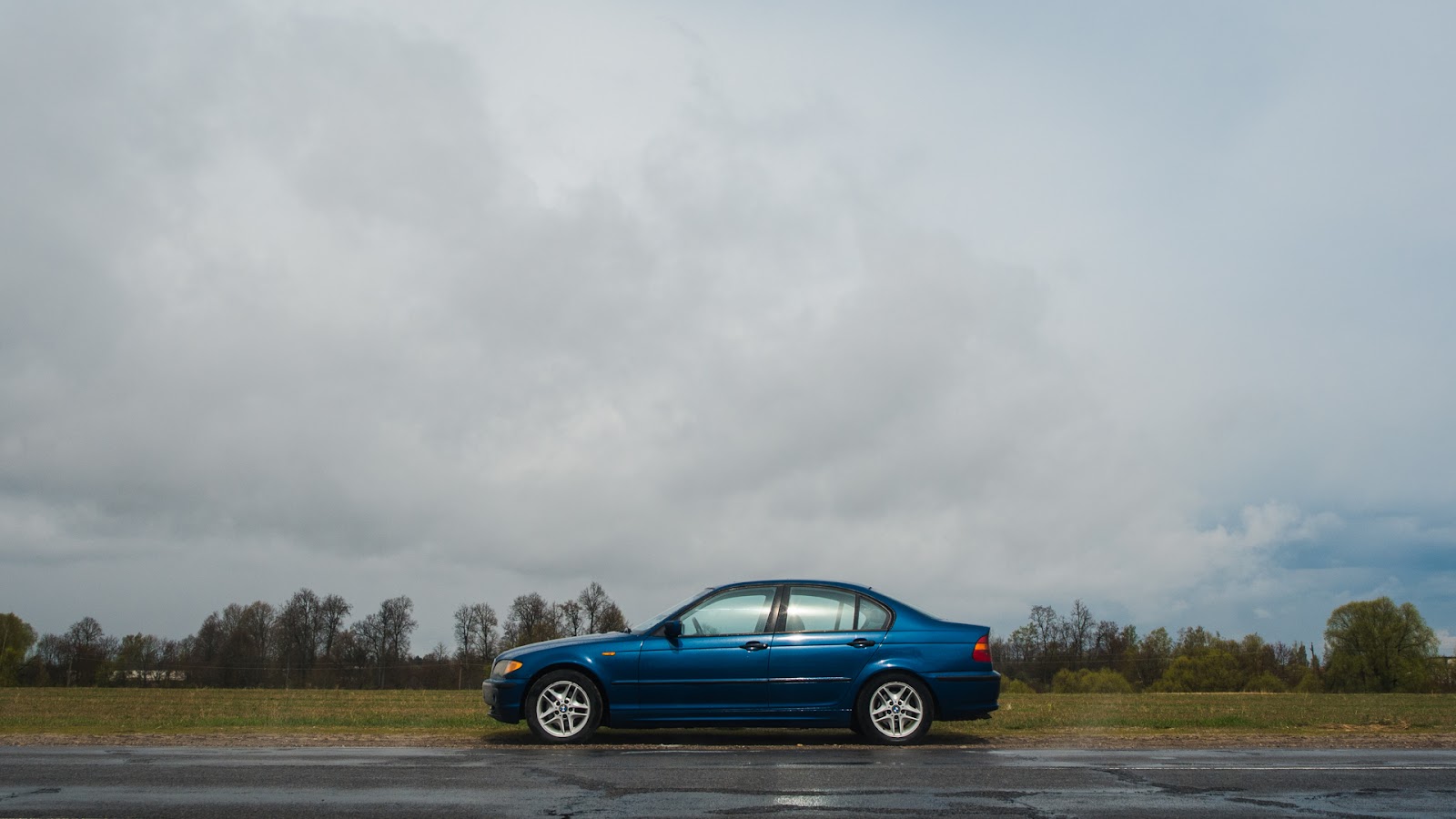 Today is May 9, morning. It turned out that our place of stay was not far from the Buinichsky field. This is a very famous, memorable place, where the landmark events of the Great Patriotic War took place. Since we were lucky enough to get here on the Victory Day, a motorcade from Soviet-era cars was passing by and beeped nearby. We decided to pay tribute to the fallen, going to the memorial. 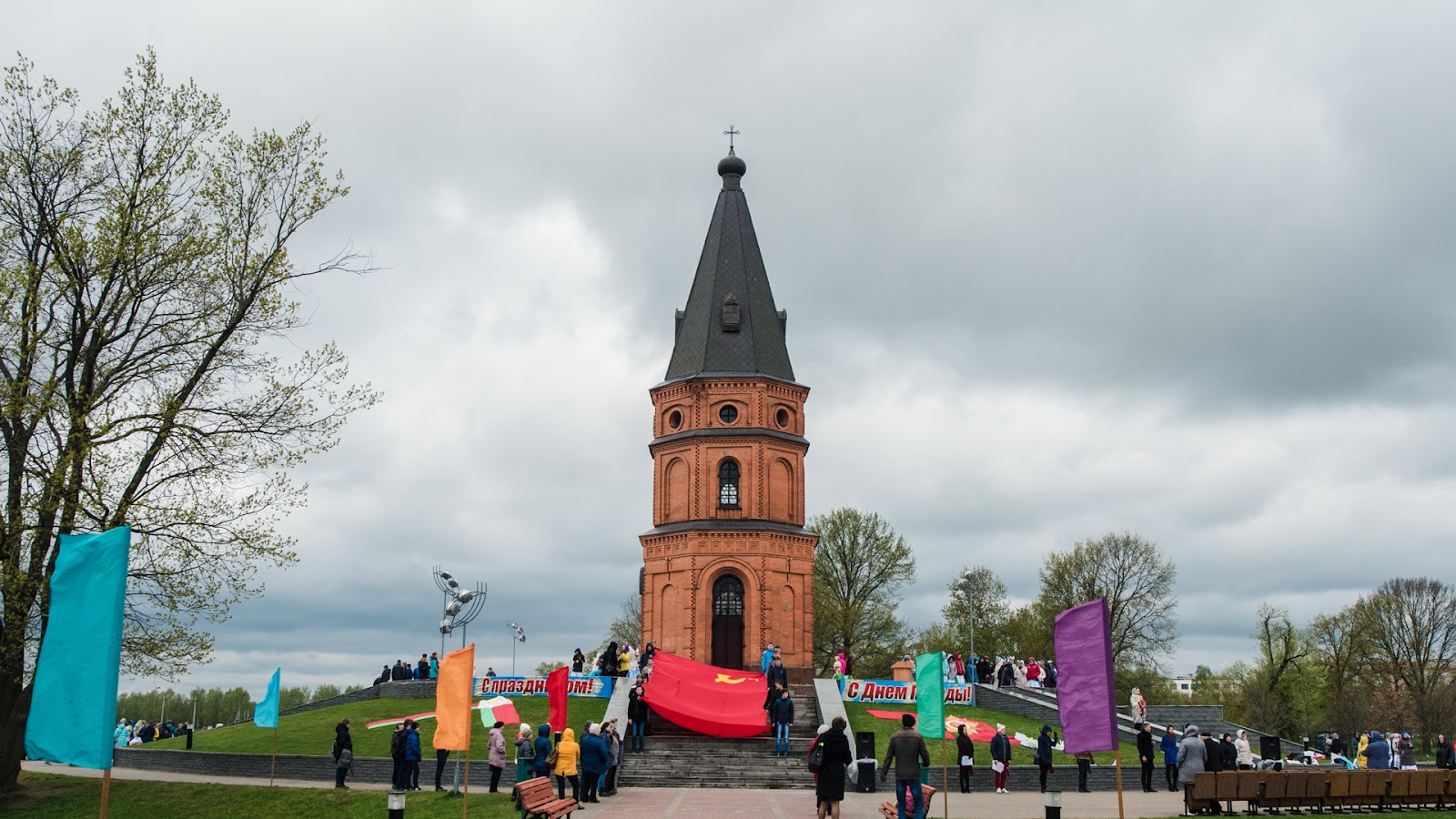 The village of Buinichi is also famous for its zoo, as well as the ethnic complex with a mill and excursions. We went in the very early morning to see the bison, bears and deer. We bought tickets and went on. The territory of the zoo is huge! Especially it was seen on the enclosures where roe deer and mountain goats live. Real expanse! They ran and jumped as they wished. Approaching the aviary with the bear, I was a little surprised, since the bears had never been so close. I would never have thought that bears were of such a large size, although it was not an adult bear, but a bear-teenager. 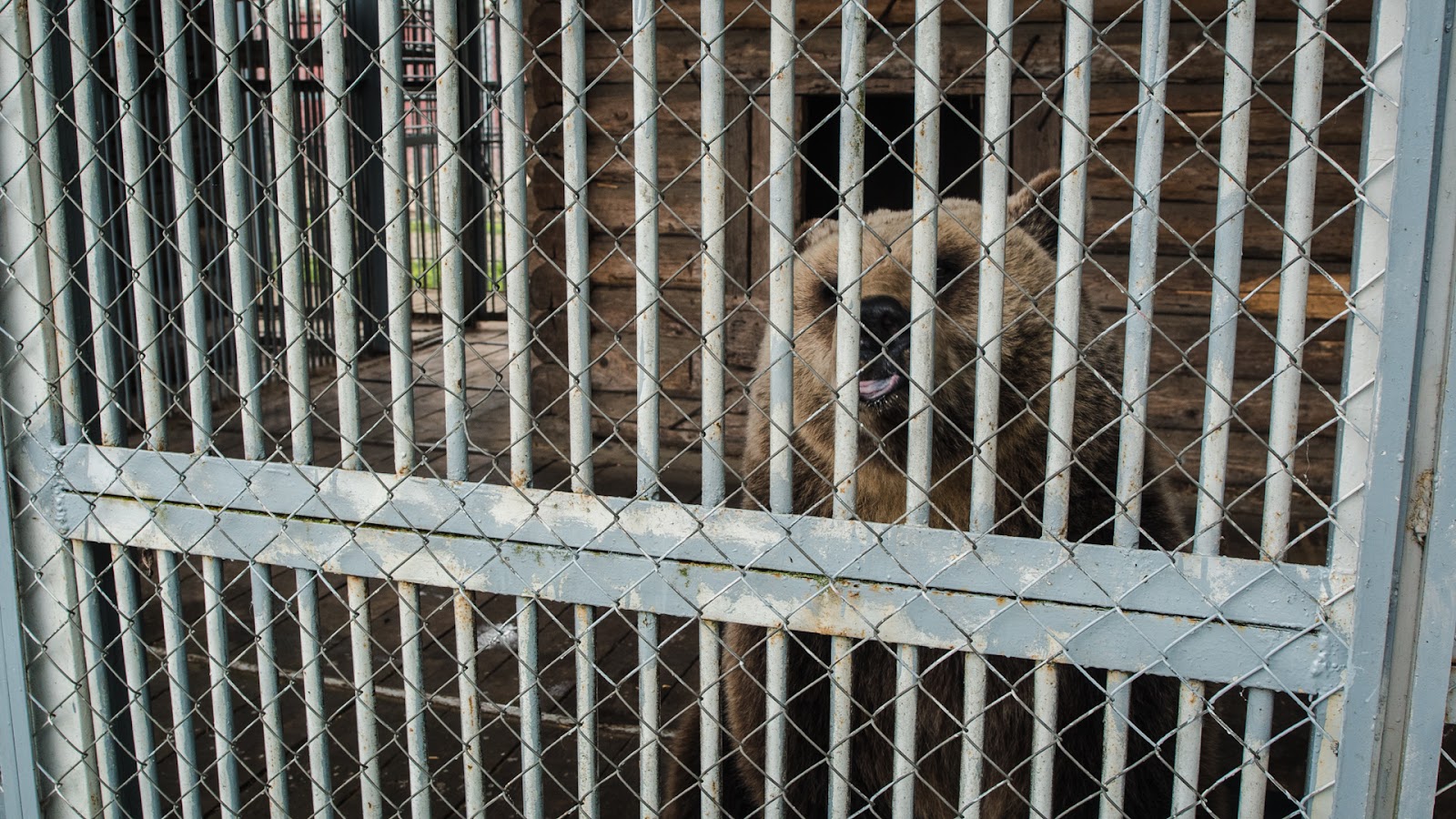 Nearby there were cages with rabbits and wolves. Good neighborhood, like in the cartoon "Tom and jerry!". 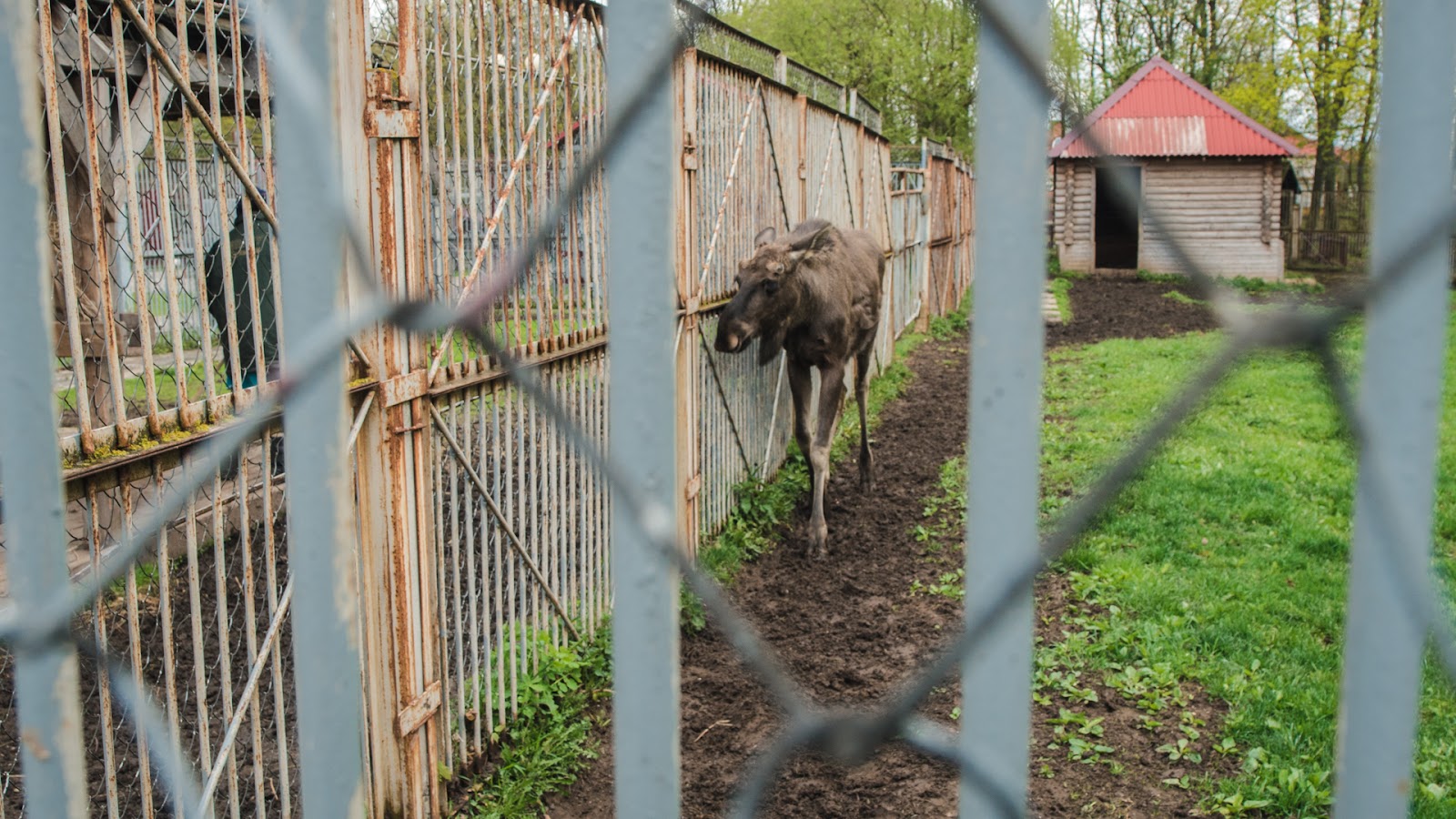 Nearby it was possible to look at the elk which was watching the park employee and was scratching on the fence.

Since it was cold and a strong wind was blowing, we did not stay for a long at one place and went to the bison. Even from a far distance they amaze with their greatness and size! It's a pity that we could not get closer to them, because the train that drives around the zoo and provides better viewing of the animals did not work: we came too early. But a couple of photos from behind the fence we managed to make. 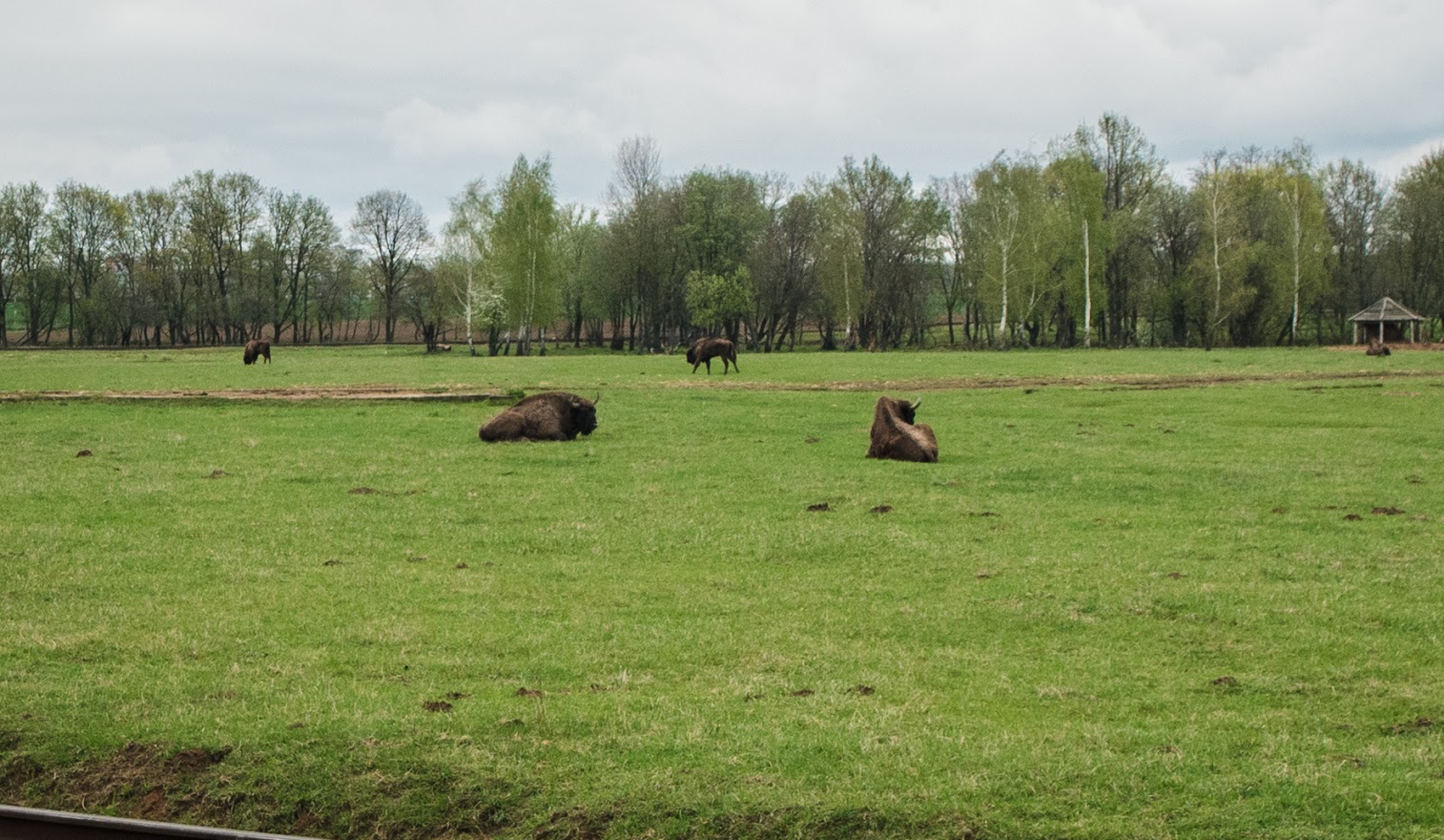 Having seen enough of the bison, we realized that we need to move to Vitebsk. Along the way we decided to visit another interesting attraction - a healing spring in the village of Polykovichi. We went there for about 30 minutes. This spring is located not far from Mogilev partially in Vitebsk region. The source is easy to find: you enter the village along the main road, at the end of which you turn to the right. By the way, if you meet a small shaggy dog ​​at the turn, tell it hello from us! After a little while, you will see a large red Holy Trinity Church. 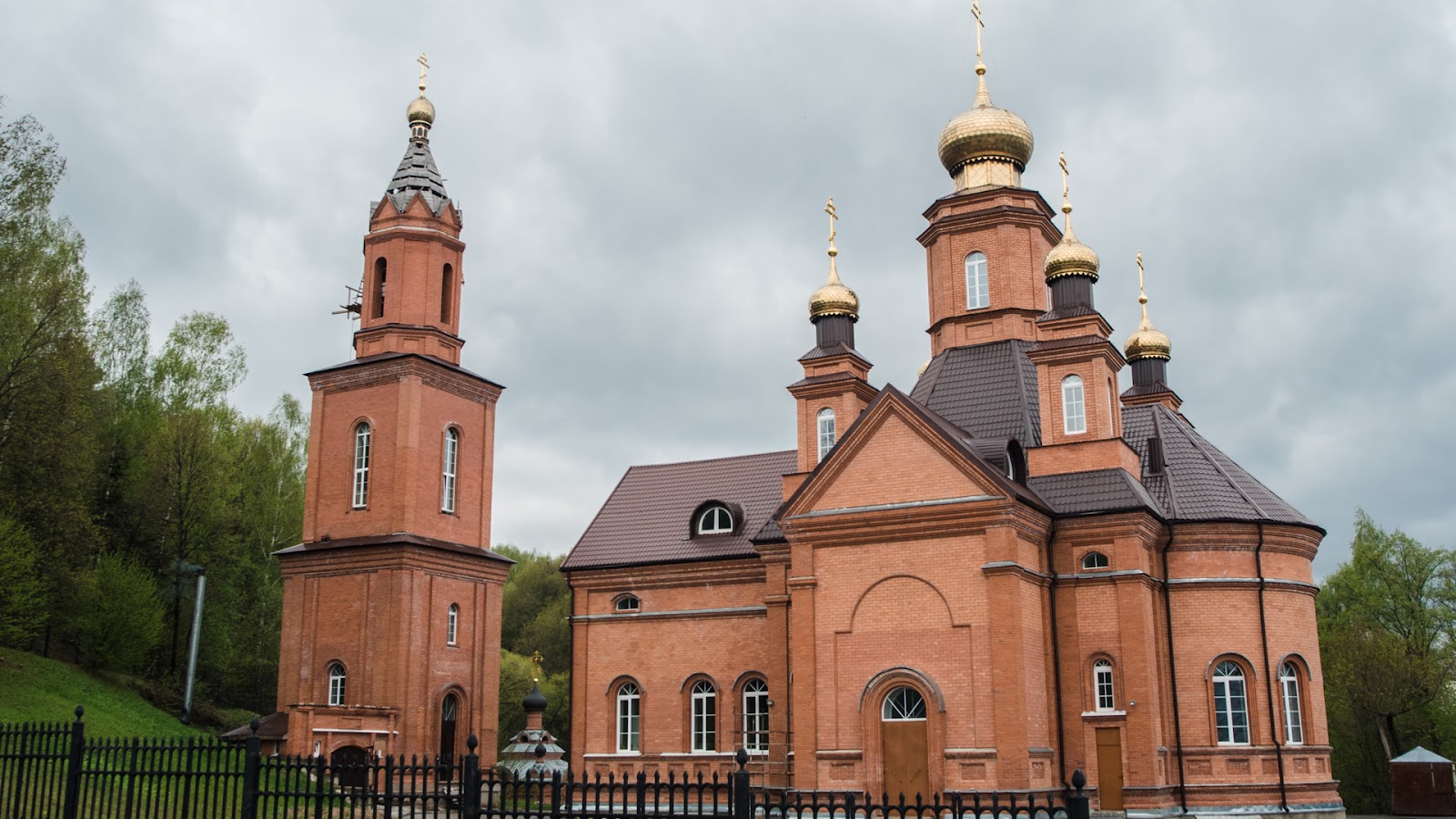 The first Orthodox church in the village appeared in 1770 and was called Svyato-Paraskevinskaya (in the name of Martyr Paraskeva - the patroness of that same holy spring in the village). The wooden temple in the life of local residents played a big role.

The spring itself is located on the territory of the temple. A separate building was built for it, where there is place for baptizing children. We decided to go up to the source, but could not reach it. In the morning it was raining, and the paths were ragged. The weather was still not nice, although occasionally the sun was already showing up behind the clouds. 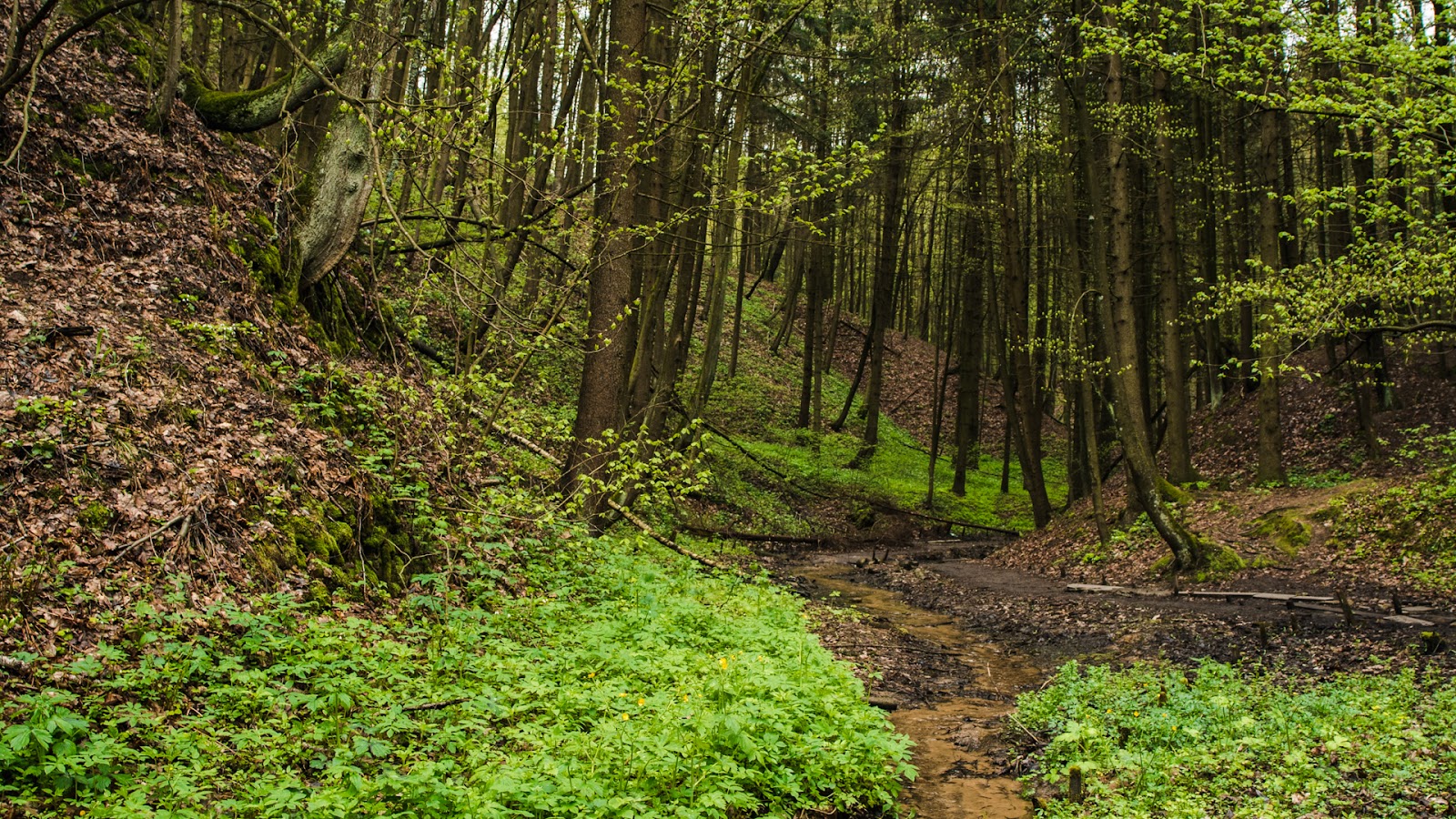 The place where the source is located is hilly and very quiet. The water in it is considered healing, however it is already very clean and tastes sweet. It's probably because it's soft. Having filled a couple of bottles to take water with us, we had to sit back in the car and leave. Although I did not want to: this place attracted me and did not let me go ...

On the way to Vitebsk the car began to make strange sounds: it turned out that plastic protection fell from the bottom of the car. We took the prepared keys, dismantled it and continued on our way. For a moment, we had an idea that our trip had come to its end and we would have to spend money for all the evacuation of our transport.

Vitebsk seemed spacious, almost like Minsk: multi-lane streets and wide avenues. This is not Mogilev or even Gomel. Here often there are Russian cars, and all infrastructure is developed for Russians. This can be seen with prices at cafes in the central streets and the presence of McDonald's. We arrived in Vitebsk in the lunch time and began to look for a place to have a snack in the center. However, the canteens did not work, and in the cafe the pancakes cost as much as 16 rubles! 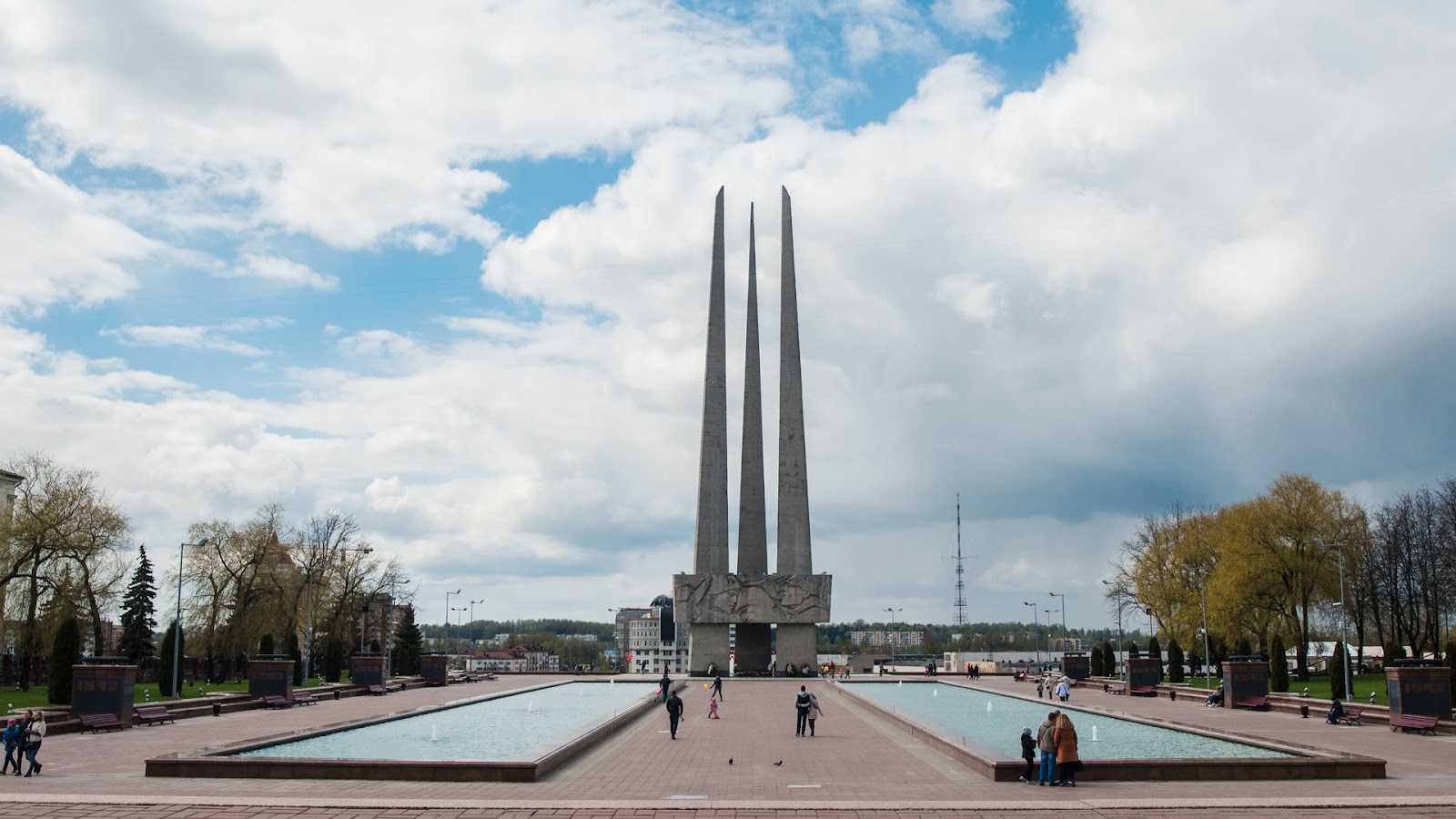 Taking a couple of sandwiches, our team went to see the central part of Vitebsk. We spent the night in Polotsk, so there was not much time and we had to use it wisely. The tourist part of Vitebsk is very large in size and in terms of the number of attractions: the Annunciation Church, the Church of Alexander Nevsky, the Drama Theater, the Monastery of the Holy Spirit, the Church of the Resurrection of Christ, the Vitebsk City Hall, the Assumption Cathedral and the Summer Amphitheater. Well, now one after another. 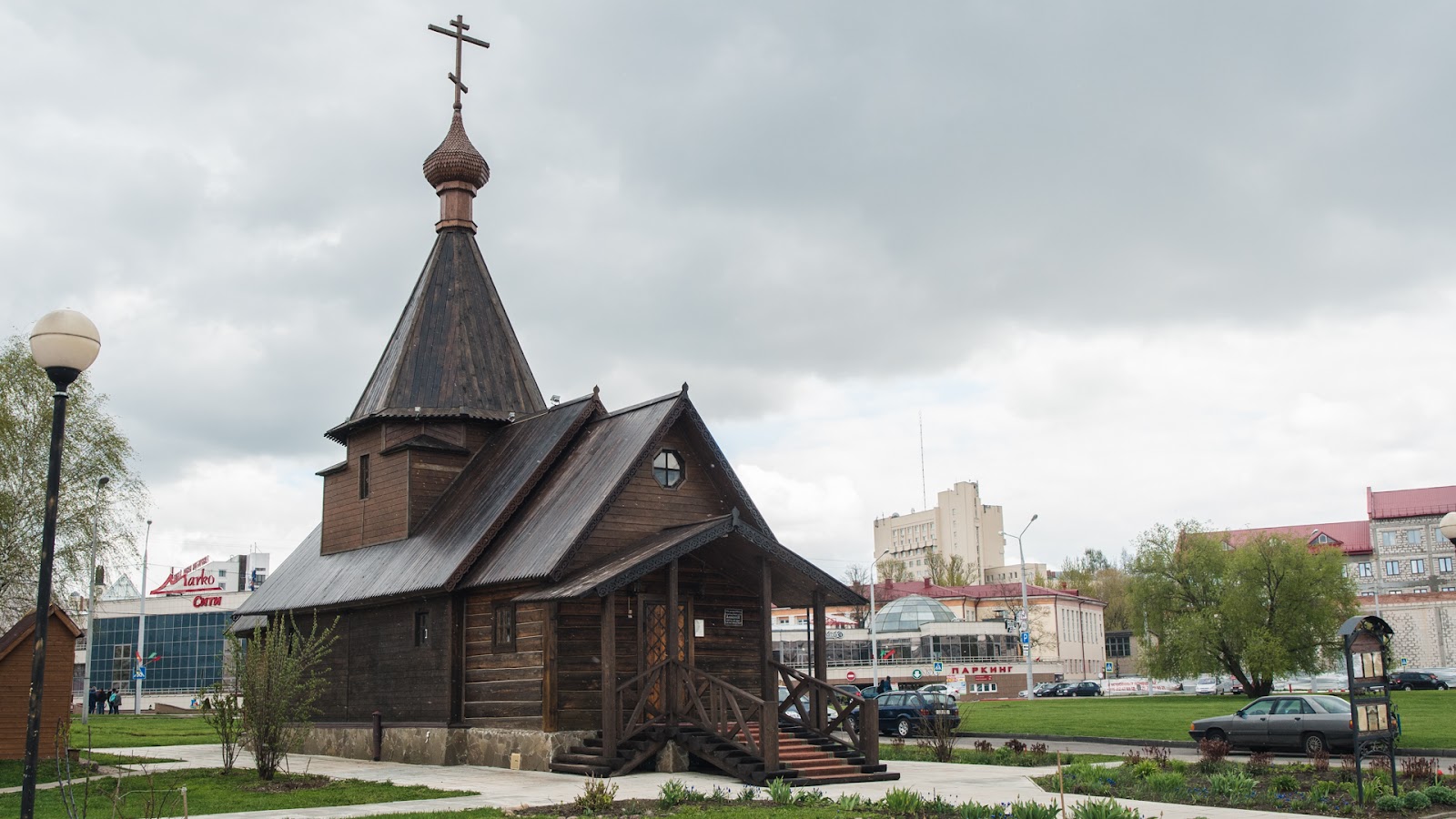 The Church of Alexander Nevsky stands on the bank of the Western Dvina. It catches the eye because it stands in the middle of new buildings and a redecorated park, and behind it there is a parking lot and a modern shopping center. It is therefore quite unusual to see a wooden church next to them. 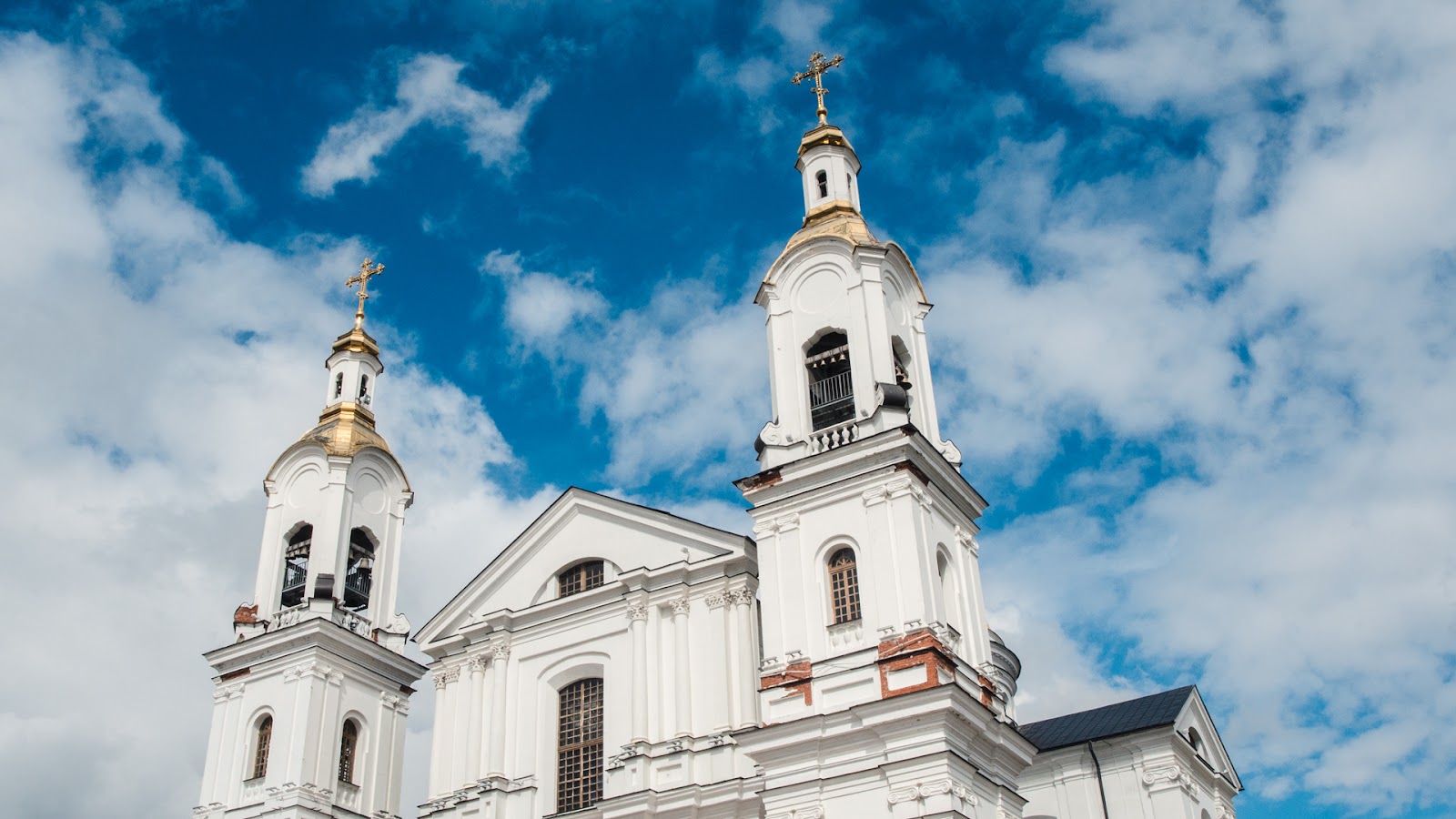 The Assumption Cathedral is located in the highest point of Vitebsk. From here you can see all the sights and even the Summer Amphitheater. The cathedral was open, we were able to go inside and put a couple of candles. The weather on this day was cold and cloudy, but this did not stop us from making chic pictures.

You can always get to the cathedral. When you look at the building from the outside, it seems that it should be very high from the inside, but in fact you find yourself in the basement. This hall is open for visitors every day. It was dark there, and unfortunately it did not work. By the way, you can approach the cathedral from the side of the Drama Theater. But, to get to the cathedral from there, you will have to overcome the ladder with a large number of steps. However, if you are strong in spirit - go on! 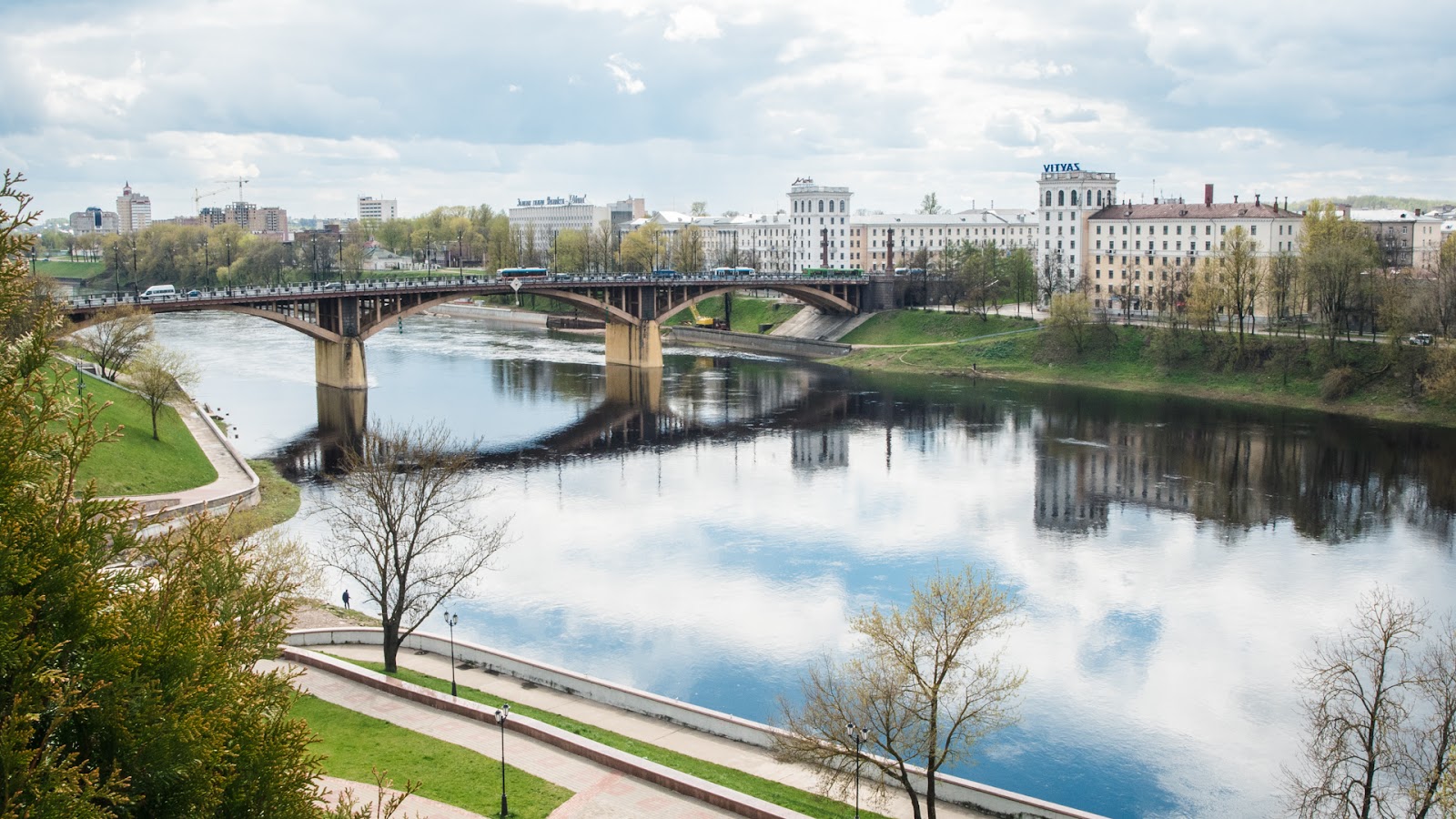 Near the cathedral you can see a magnificent panorama of the river: store a film or flash cards, because you will take a lot of photographs. 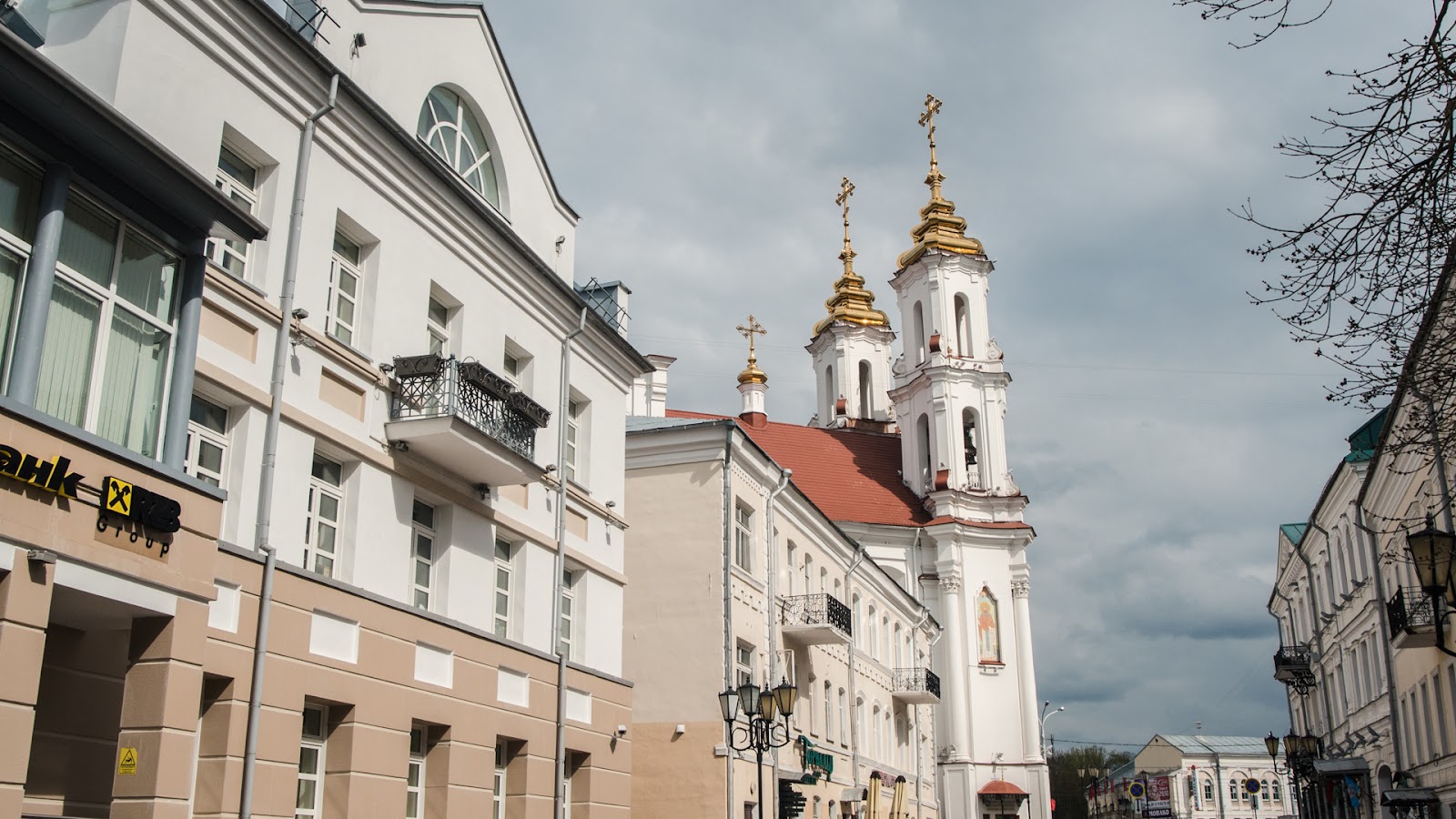 Nearby, near the cathedral, there is the Church of the Resurrection of Christ. It differs from all the others with an interesting ceiling, or rather a saturated blue color. Unfortunately, it is forbidden to take photographs in the church, so it did not work out. But, if you happen to visit Vitebsk, there will be an incentive to go inside the temple and personally see the beauty of its interior decoration. There is also a monument to Olgerd and the Town Hall of Vitebsk, as well as several interesting museums. On the contrary, the Frunze recreation park is located, through which the Vitba River flows leisurely. Yes, yes, the one that gave the name to the wafer bars.

Then the phone rang: we received a call from Polotsk and were asked when we would arrive. It was a signal that we should leave Vitebsk and go further. Ahead of us there was a two-hour crossing at sunset. In Polotsk we found a hostel and decided that it was an excellent option to spend the night and go on tomorrow.

By the way, one more little life hack from our team: if you go to the other side of the road from the monument to Olgerd, then you can capture 3 sights of Vitebsk with your smartphone at once: Town Hall, the Church of the Resurrection of Christ and the Assumption Cathedral. 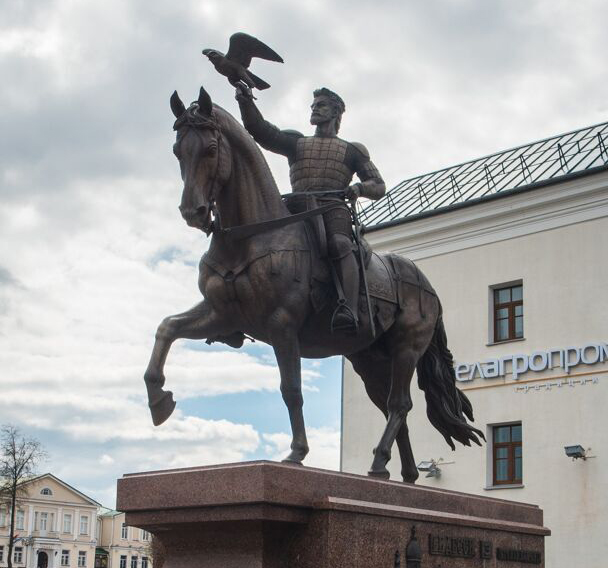 And tomorrow we are waiting for a day in Polotsk and the road to the most picturesque region of Belarus - Braslav lakes.