Today we are in Minsk, and Nastya, the director of the Minsk Cycling Society, accompanies our expedition. Remind that we have already passed through Gomel, Mogilev and Vitebsk, and there are still Grodno and Brest ahead. 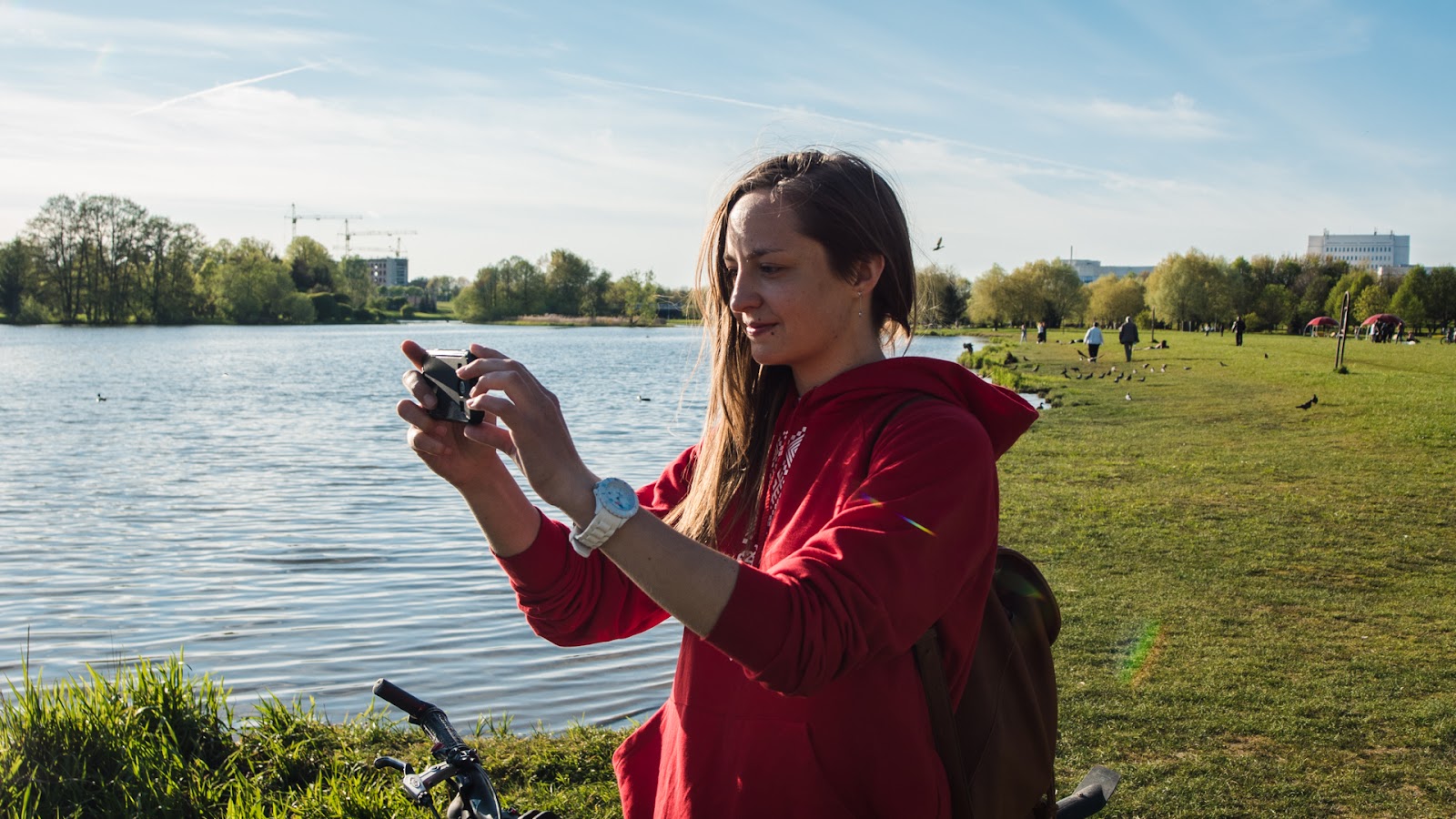 We started our way fr om the center of Minsk and, while we untied the bicycles fr om the railing, Nastya made a note to our method of fixing bicycles. We had a lock with a cable 8 mm thick, but she told me that such locks snack in a couple of seconds. Now Nastya is in the habit of paying attention to everything connected with bicycles: locks, paths, congresses.

On the way we found a military cemetery. Nastya likes to be here because of the silence and tranquility, no one interferes. In addition, in the cemetery is the functioning church of St. Prince Alexander Nevsky.

The only temple in Minsk, almost completely preserved its original appearance. 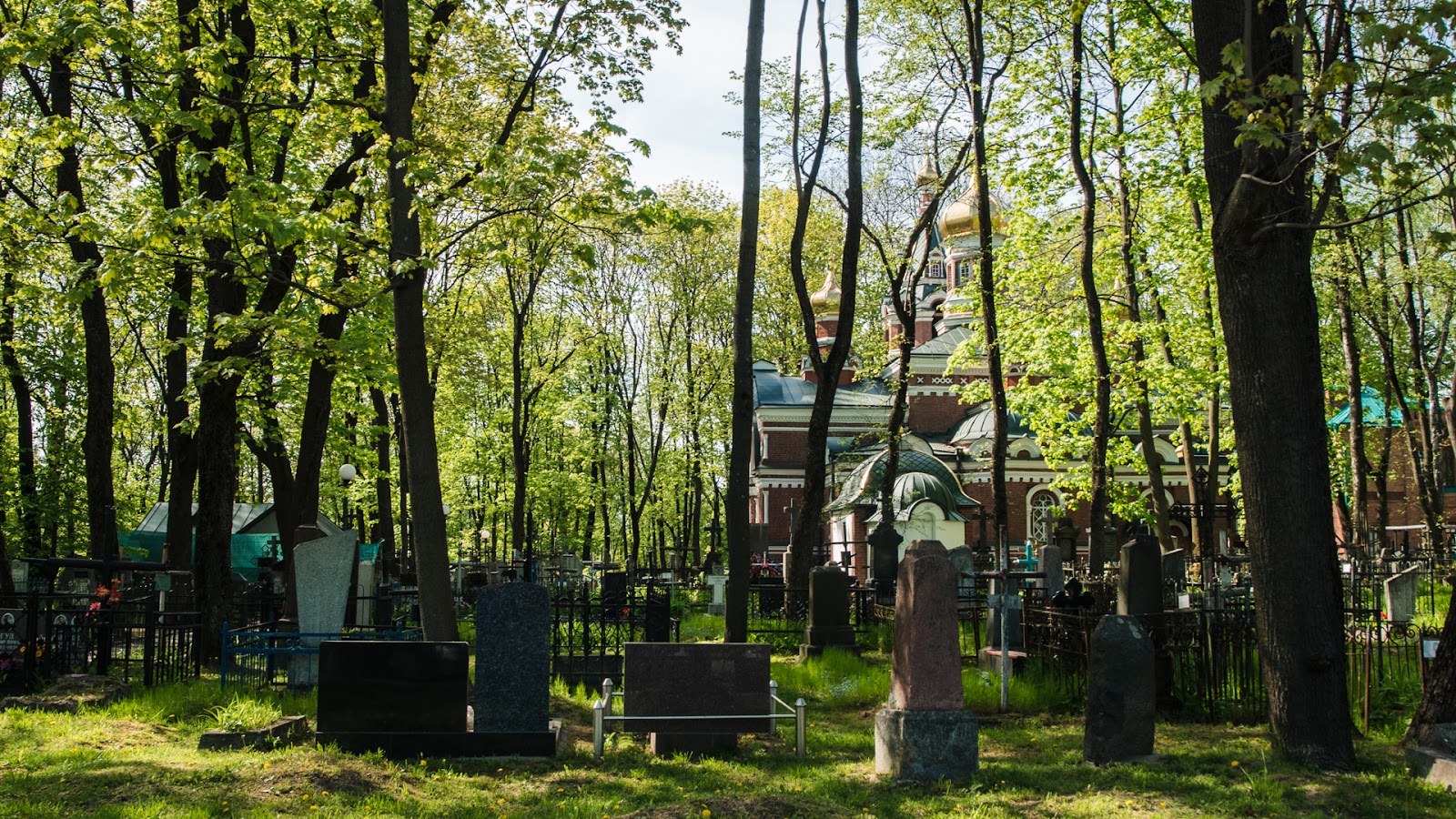 Very close is located the office of the Nastia`s organization, near which local residents pour themselves skating rink for the winter. Even their little garden is!

Nastia is engaged in the development of cycling movement for 2 years, and in general the Minsk bicycle community is 6 years. Over the shoulders of Nastya is a bicycle parade, in which 10 000 people took part, as well as many other interesting events.

Looking ahead, we will say that Nastya built the route based on her volunteer activity and profession, as well as her passion for yoga, the coach of which she is.

The first kilometers were laid through the Independence Avenue and passed very quickly after the conversation. Nastya told about the merits of the organization, which, incidentally, was visible to the naked eye. 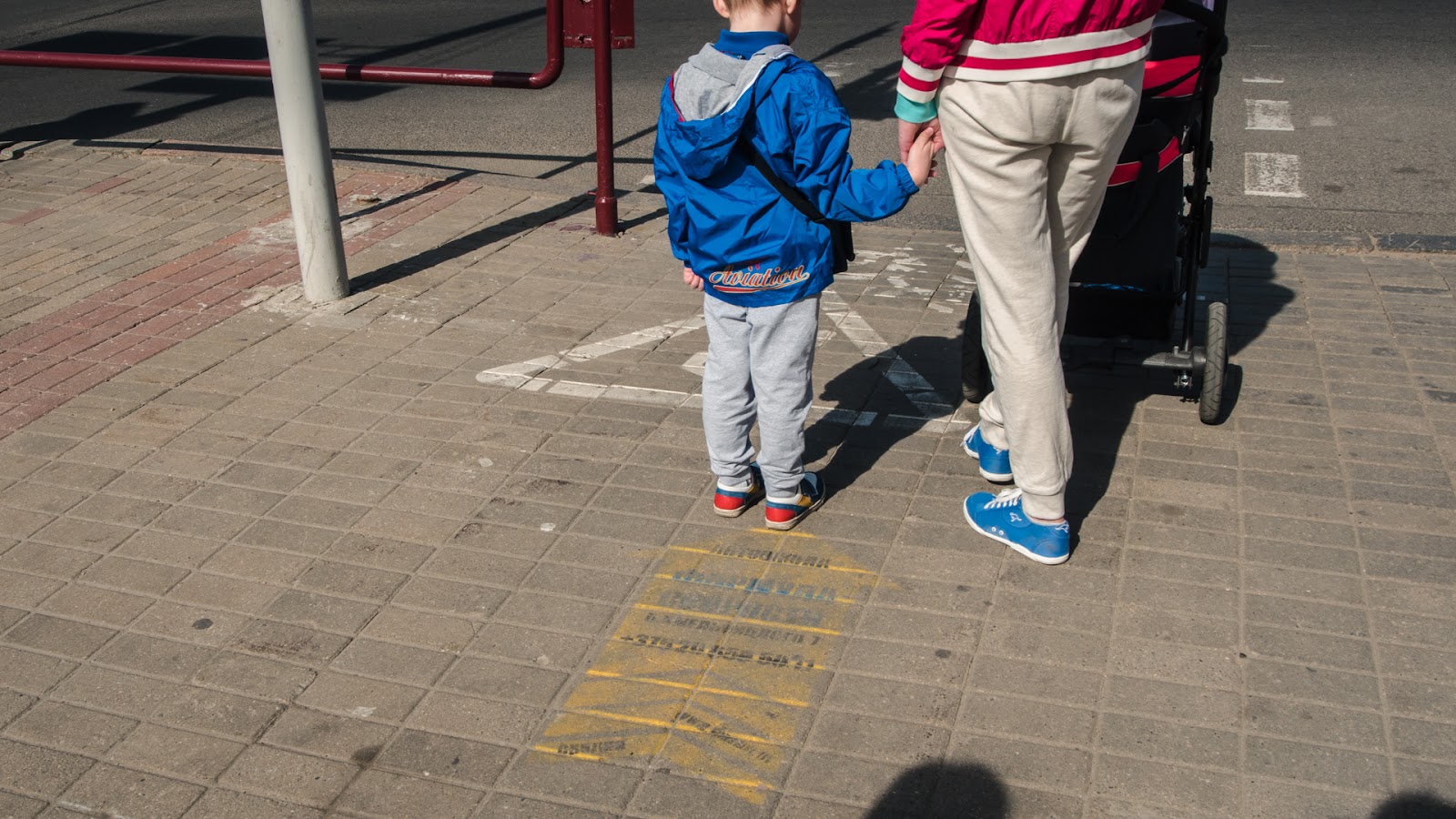 The changes in the veloinfrastructure are very noticeable, and it's great. But now there are other problems. For example, conflicts of interest of cyclists and pedestrians, which sometimes happen when distinguishing pedestrian and bicycle paths.

-Bicycle stream is not a place on the sidewalk, because a bicycle is a vehicle whose speed sometimes significantly exceeds the speed of a pedestrian. But the bicycle roads must be separated fr om the automobile roads. Then there will be no conflicts, - says Nastya 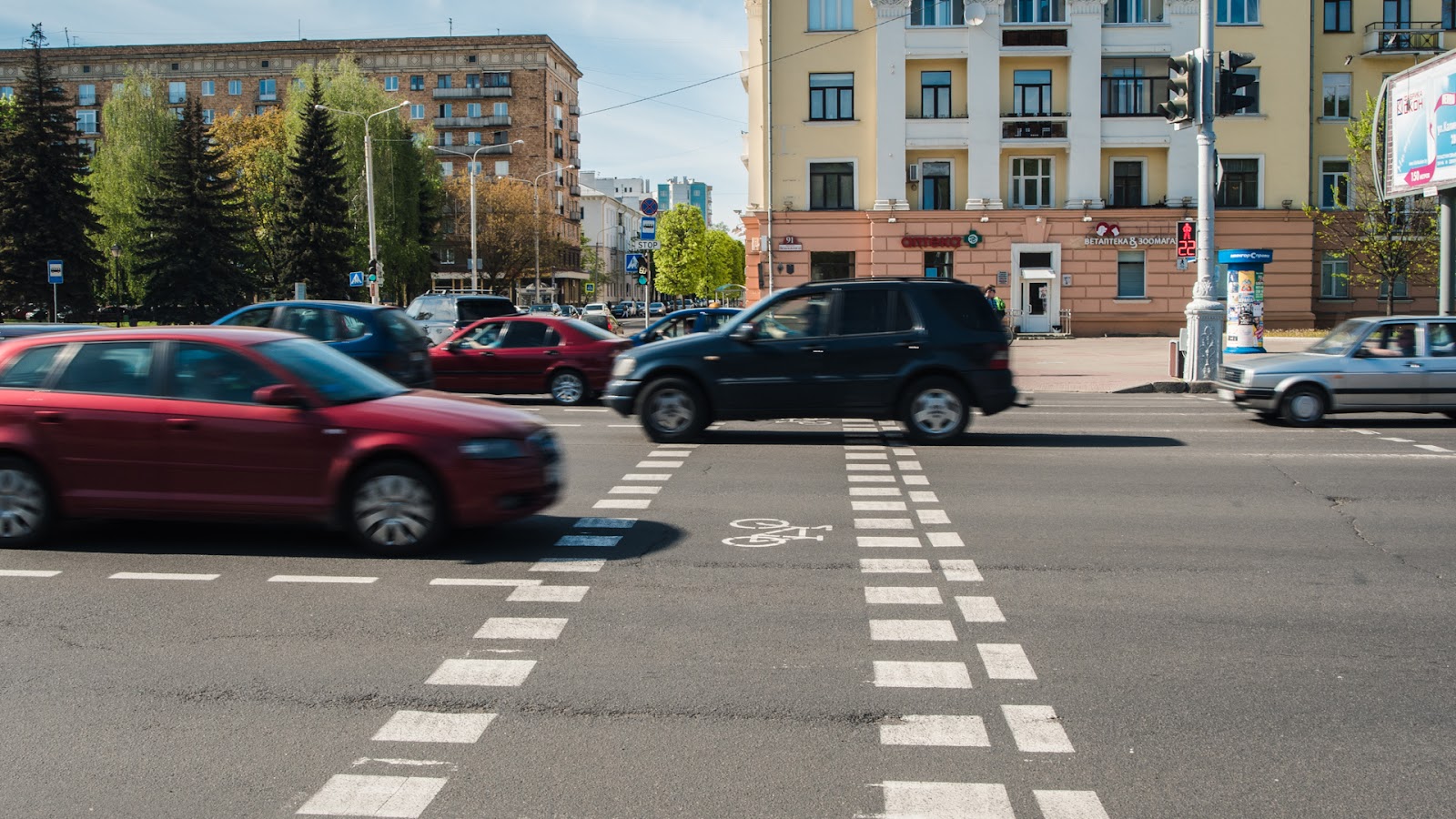 The first point of our route was Sevastopol Park, which Nastia used to visit before when she lived nearby. The access to it was dug up - laying a heating main, so I had to go round. Mums with strollers are walking here, there are meadows with green grass and a lot of space to just relax and rest. Here you feel like in nature, despite the fact that the park is located in the center of the city. Therefore, this is one of the favorite places of our guide. 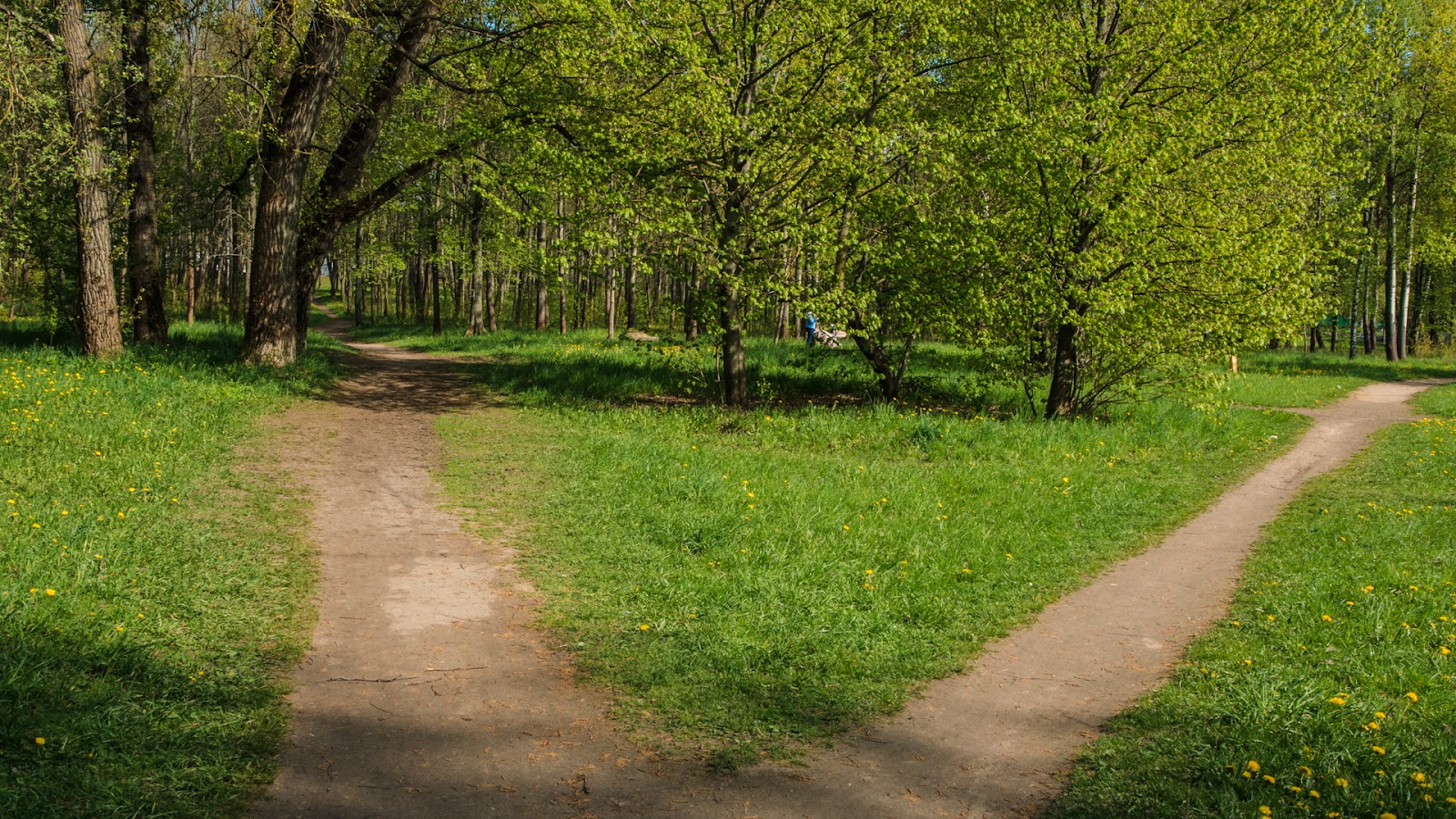 Pay attention to the Nastia`s bike. It is very simple and reliable. As Nastya says, the bike should be such that it works well and its loss does not become a very significant damage, so she treats it calmly. And her colleagues often ride bicycles, which have long needed to lubricate everything or change something, because for them a bicycle is primarily a means of transportation, and not a way to stand out. 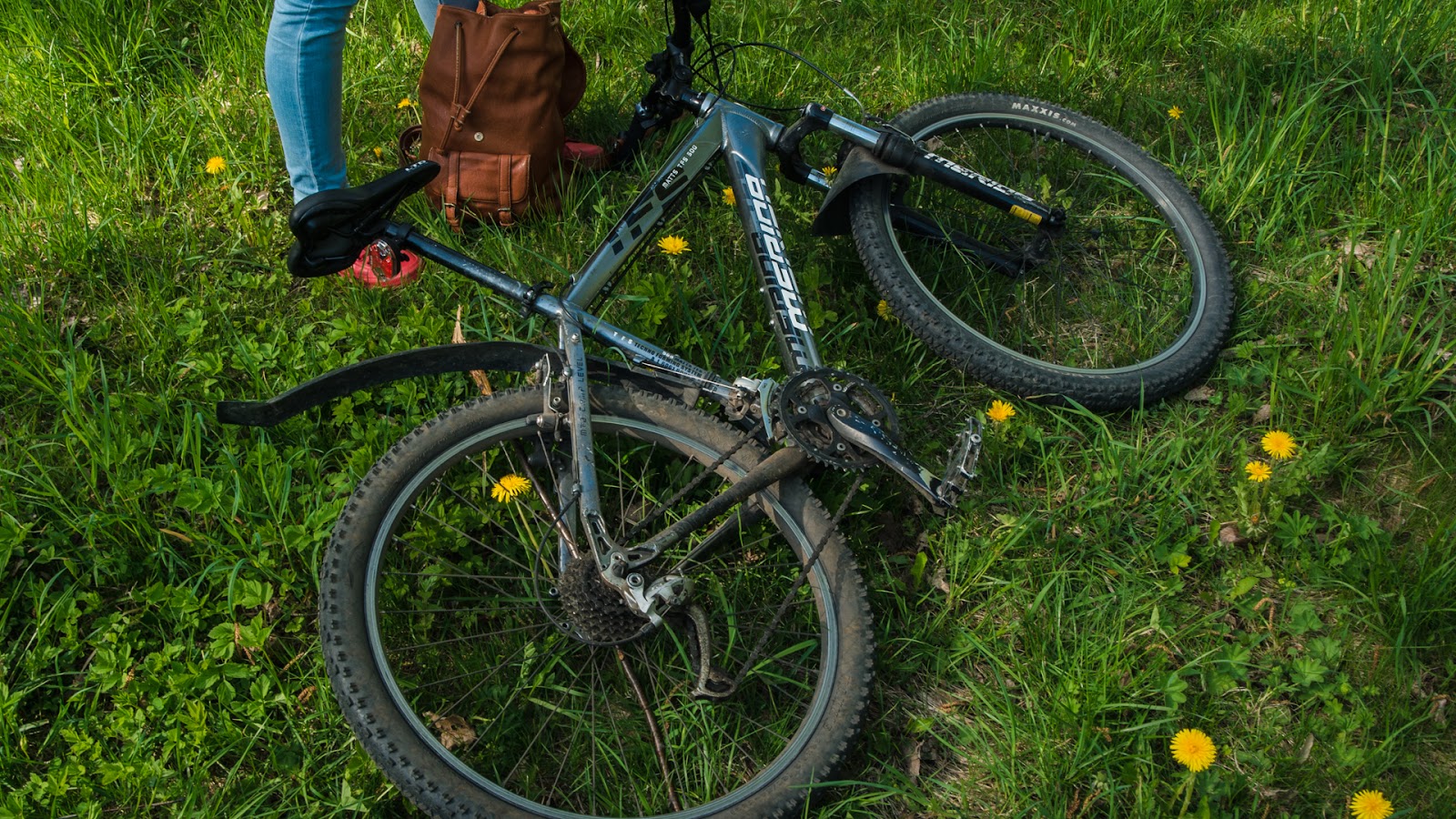 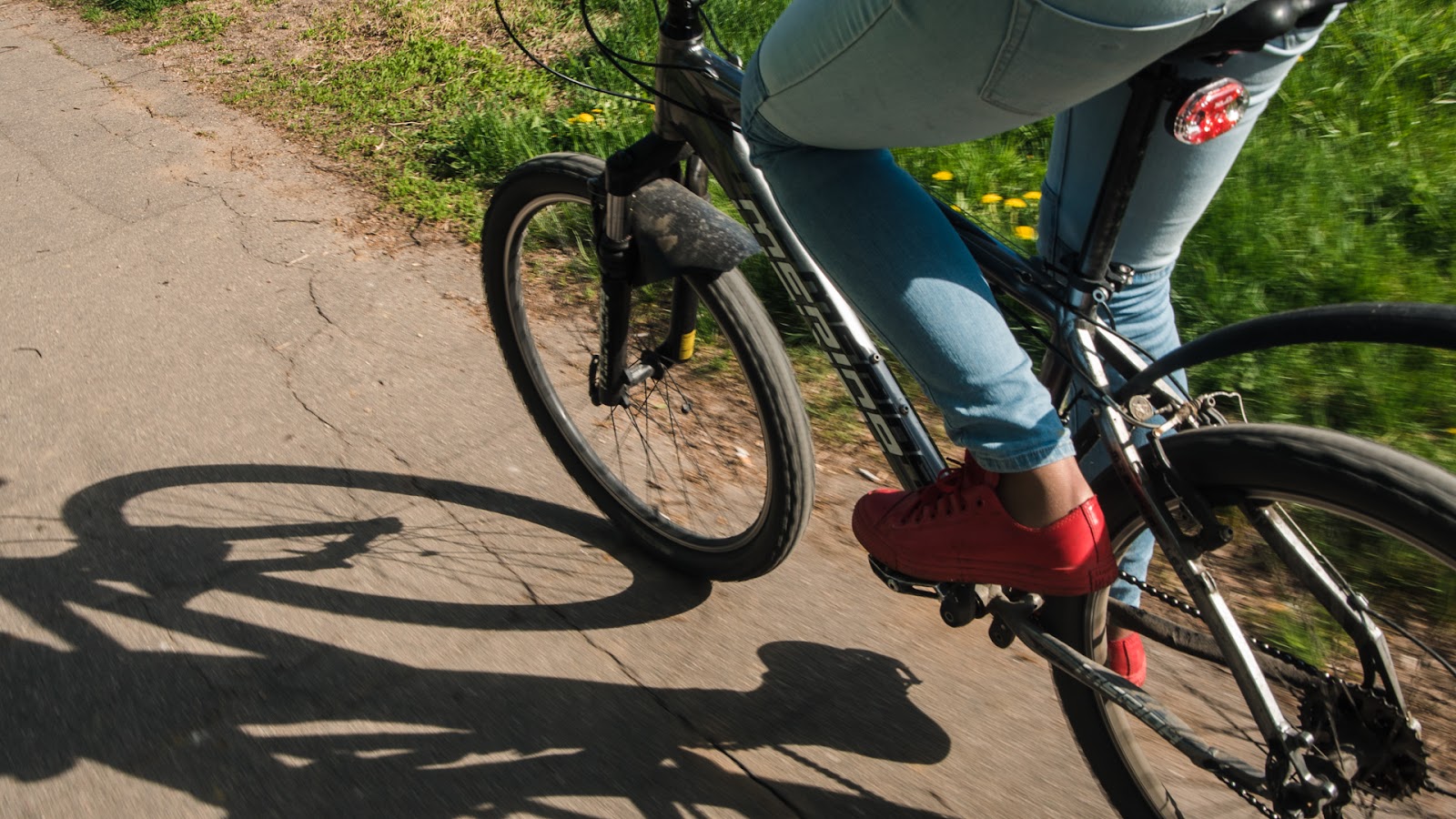 We went to the next point. The park zone, which runs along Kalinowski Street, is necessary for the migration of animals and insects through the city. This was told to us by Nastya, who, being a communication designer, understands the design of urban infrastructure.

The Slepian water system is the name of the place wh ere we arrived. Here is the Forest Zeleniy lug. Pine forest in the city - it's just great! 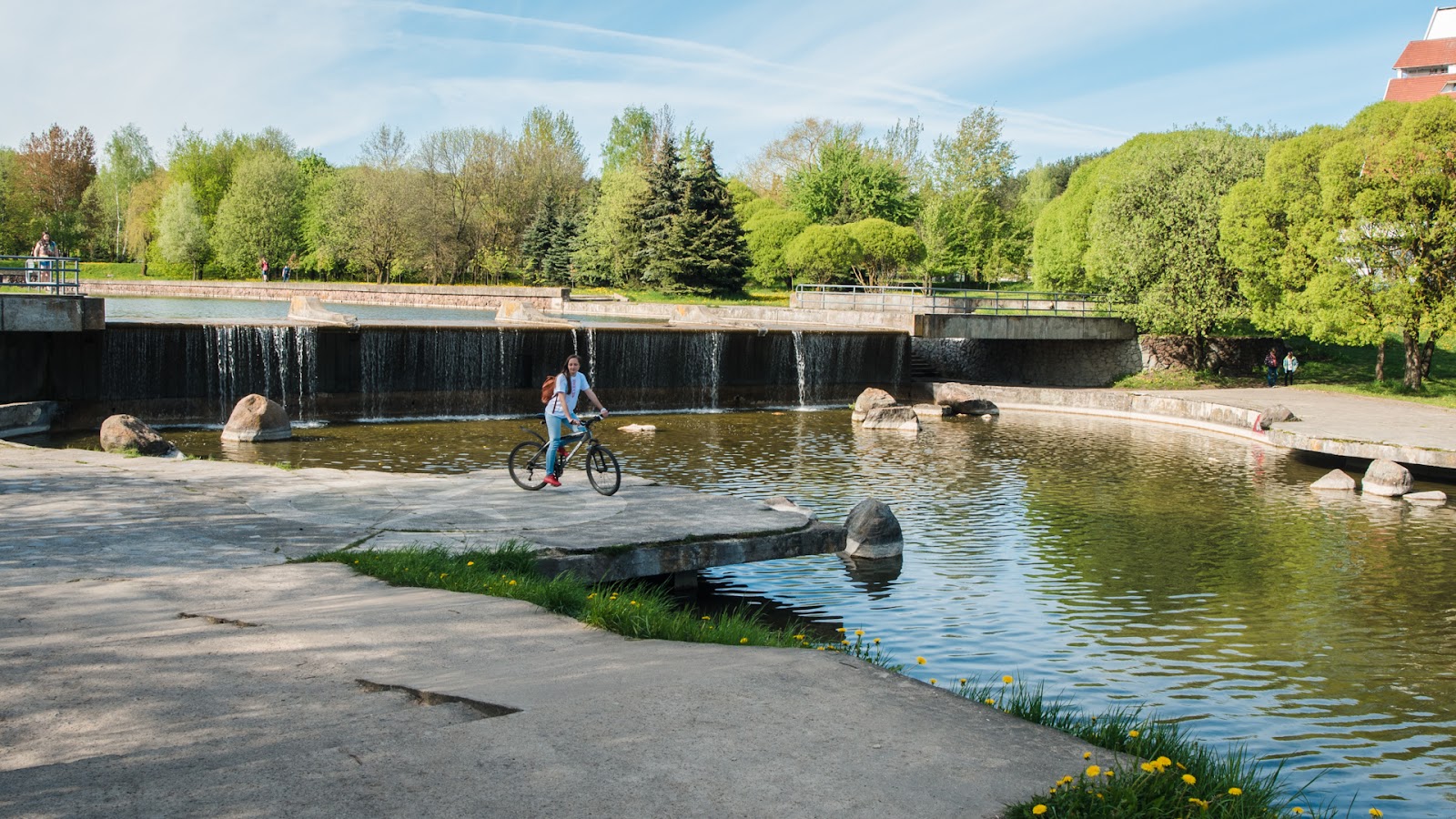 The forest park area passes almost through the whole area. It includes the Slepian Water System: various reservoirs, canals, a forest park. In the years of the USSR, this building of Belarusian architects was awarded the Lenin Prize, a high award for those times.

We drove straight under the wall of the water, mastered a small ascent and found ourselves on the edge of the forest. From this point you can see many kilometers around. We can say that this is a kind of viewing platform, although this place is not suitable for this. Sportsmen train here, as the track base is not far away, and older people are also involved: Scandinavian walking is popular with them. The most suitable place for training! Trees rescue from the heat in the midday swelter and around reigns a refreshing pine aroma. 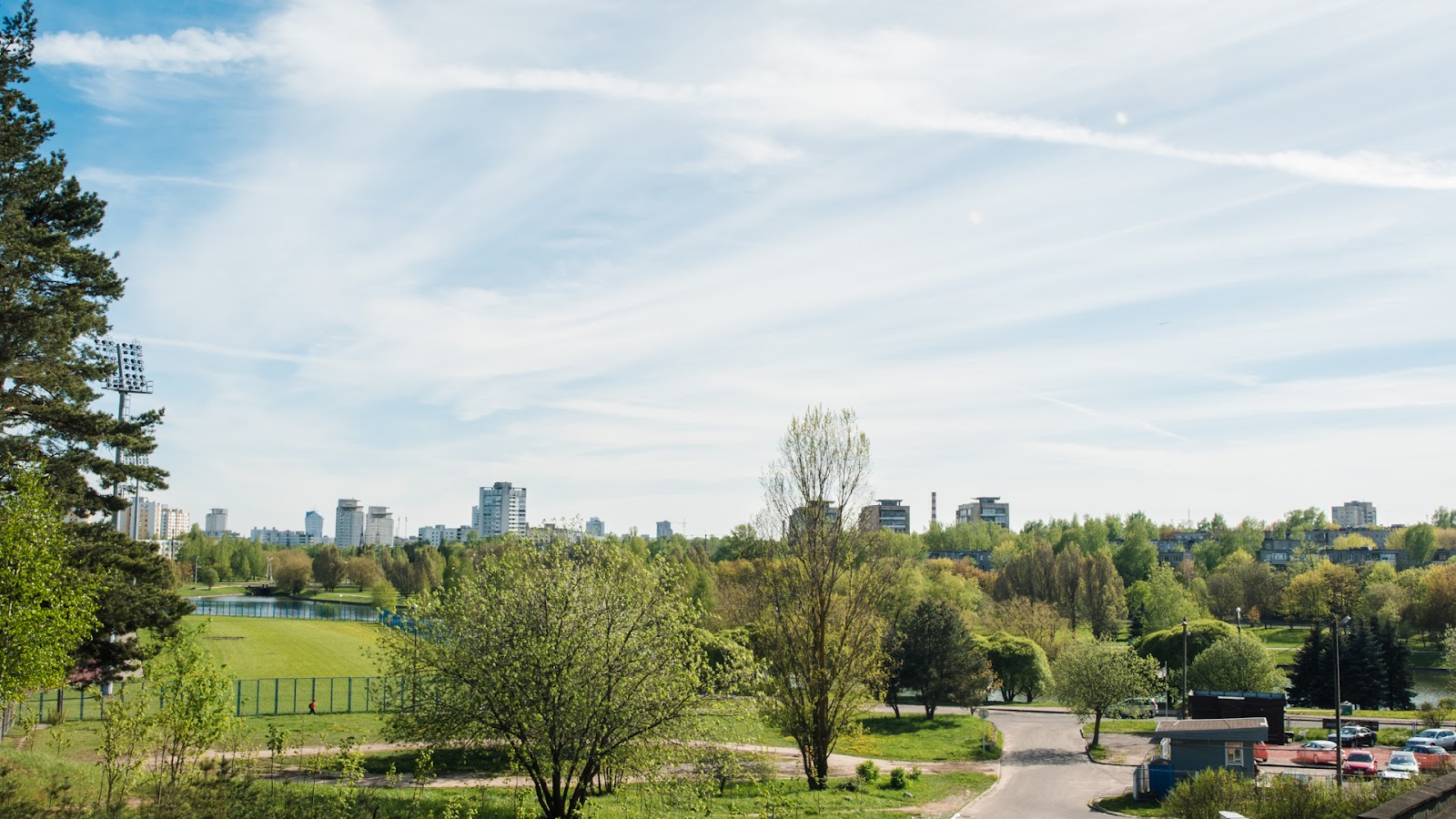 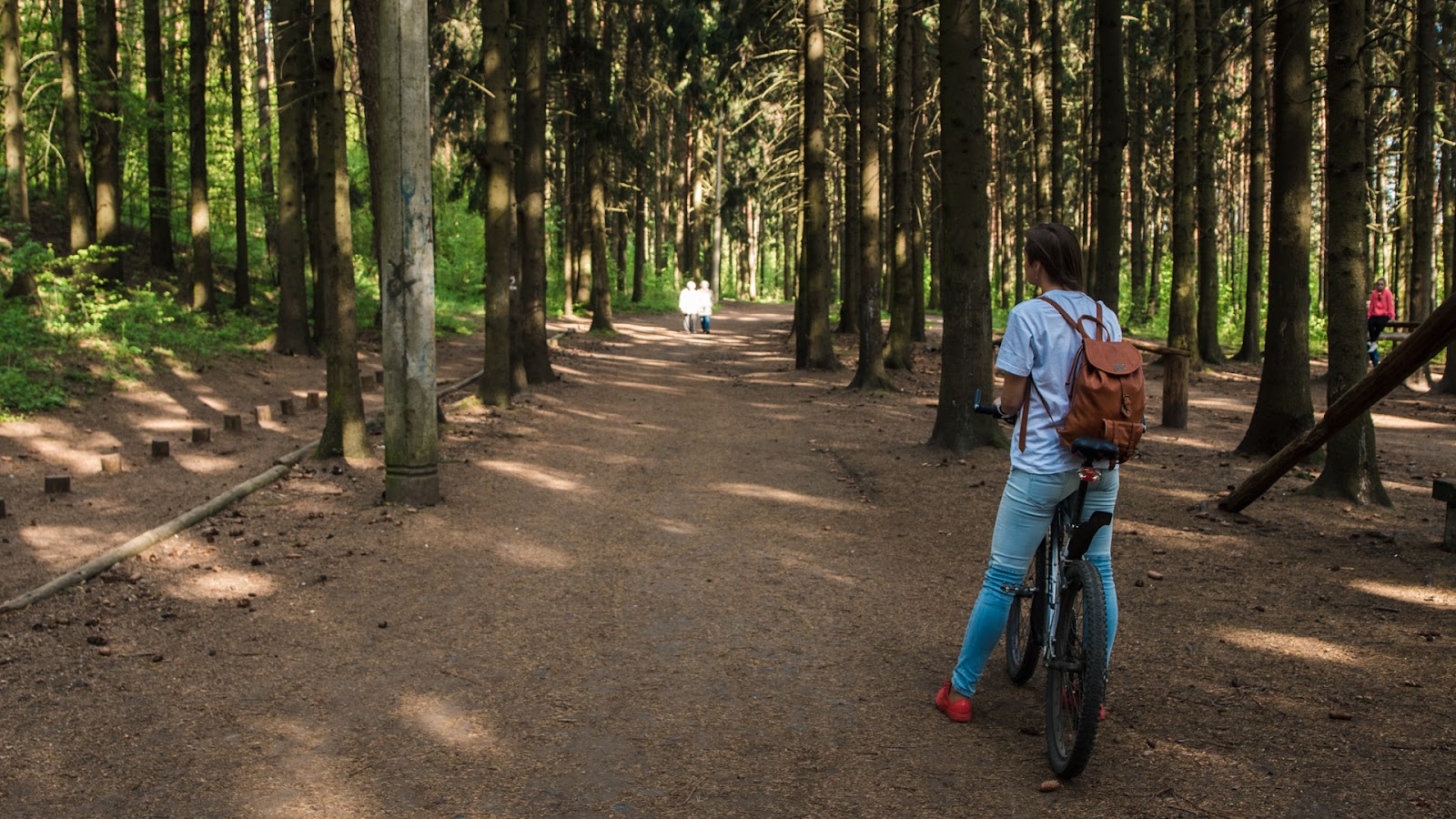 In the forest, of course, great, and there are cool paths for a quick bike ride, but it's time for us to go to the next place.

Once again, we recommend you to ride a bicycle more often. Such gorgeous places by car and subway will not open!

Along the way, we met here such architectural forms of fountains and canals. Ducks splash nearby, jump from the slides down, directly to the water, like penguins. It was very interesting to watch this. These fountains are in the Polotsk park, we will also mark it on our interactive map. The park is ideal for yoga classes, there are bridges, lawns and you can make beautiful photos there. 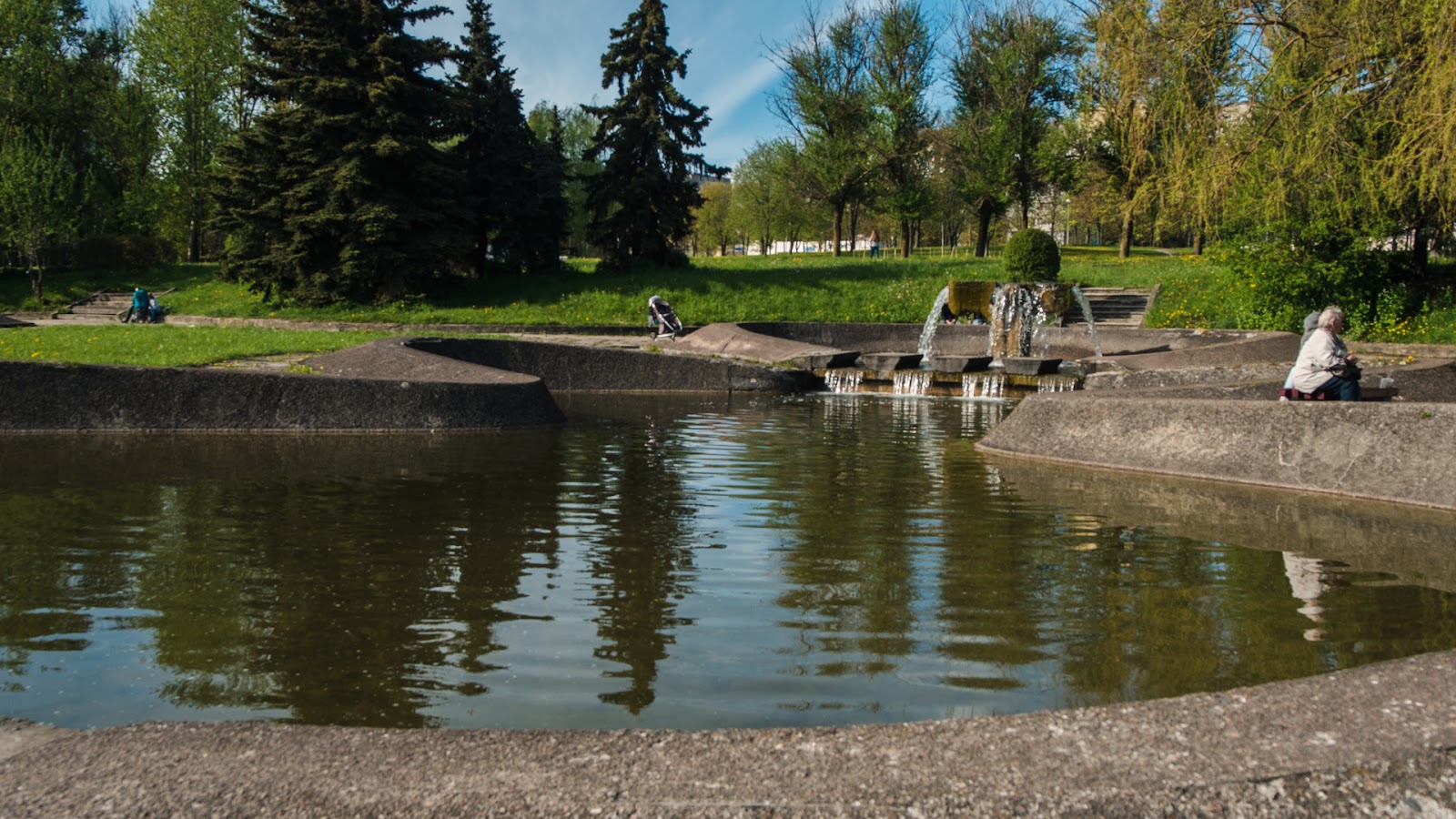 Plus of this place is also in the fact that here is the old architecture. You can run, jump, touch everything - that's why Nastya loves this place so much.

It was 10 kilometers of our way, and we decided to cool down. On the way we met McDonald's: having bought a couple of cocktails, we talked a little more with Nastya about her organization. Nastya said that the Minsk Bicycle Society's team is even benefiting from the holidays: they travel to other countries and study bicycle infrastructure, and also get acquainted with representatives of other organizations. After all, the exchange of experience is very important.

The reservoir of the Tsynia became our next point on the route. Here we arrived closer to the sunset, so the photos became even more healthy. 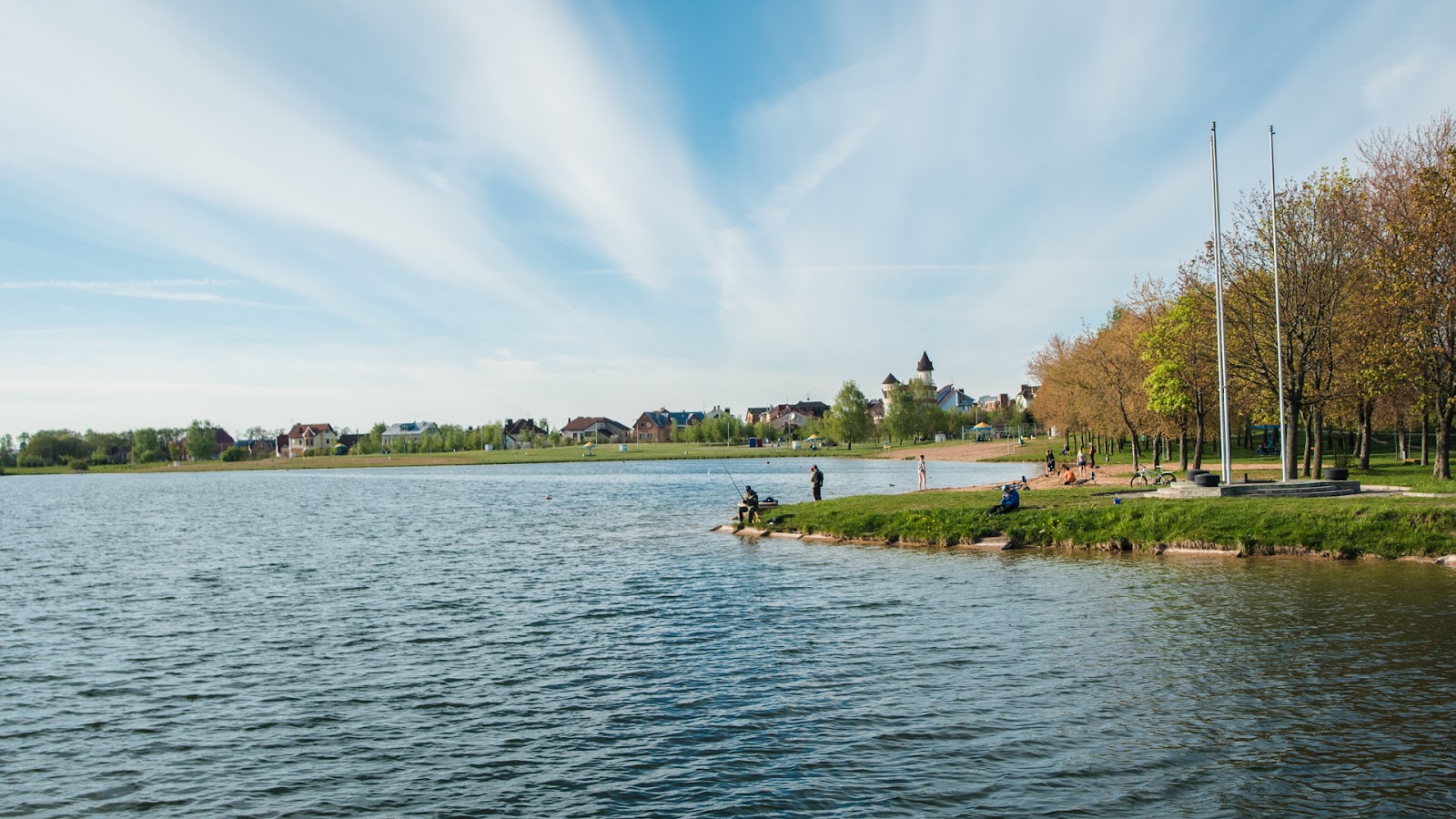 The reservoir of the Tsynia is an artificial reservoir, located in the northern part of the capital, near the previously existing village of Tsna-Yodkovo. It was created at the end of the 20th century, in 1982. The original purpose of the reservoir was for the technical and economic maintenance of the city with water, and now it is one of the most popular recreation areas. There are excellent bike paths, bike parks, cafes.

The last point in the route was Komsomolskoye Lake. It is located very close to Nemiga and the city center, which has very much to visit. 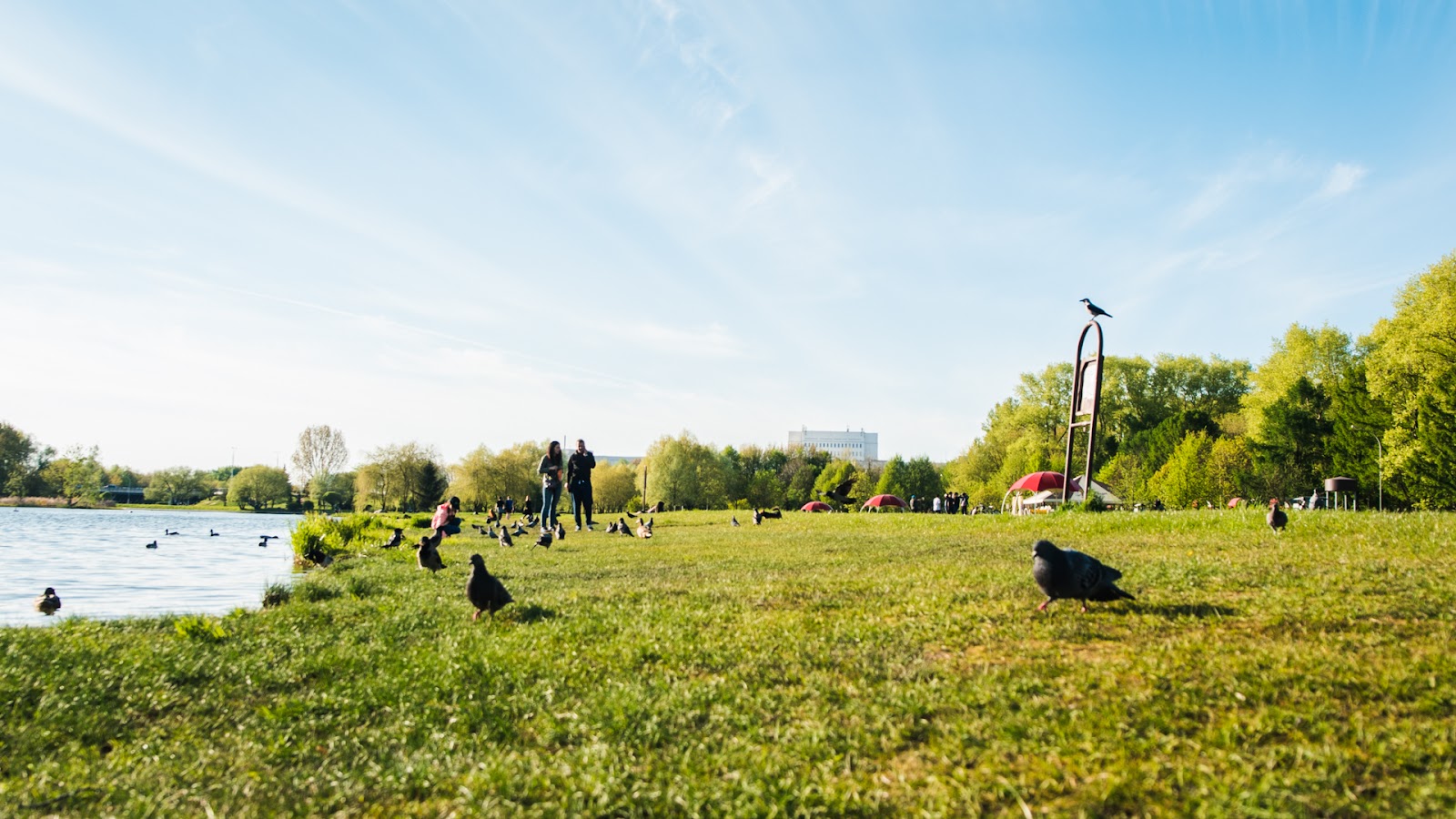 Construction of an artificial reservoir was started in 1940 with the aim of preventing the flooding of Minsk during the spring floods. The pit basin under the lake of 35 hectares was excavated manually. The grand opening of the lake was scheduled for Sunday, June 22, 1941, but was disrupted because of the outbreak of the war. 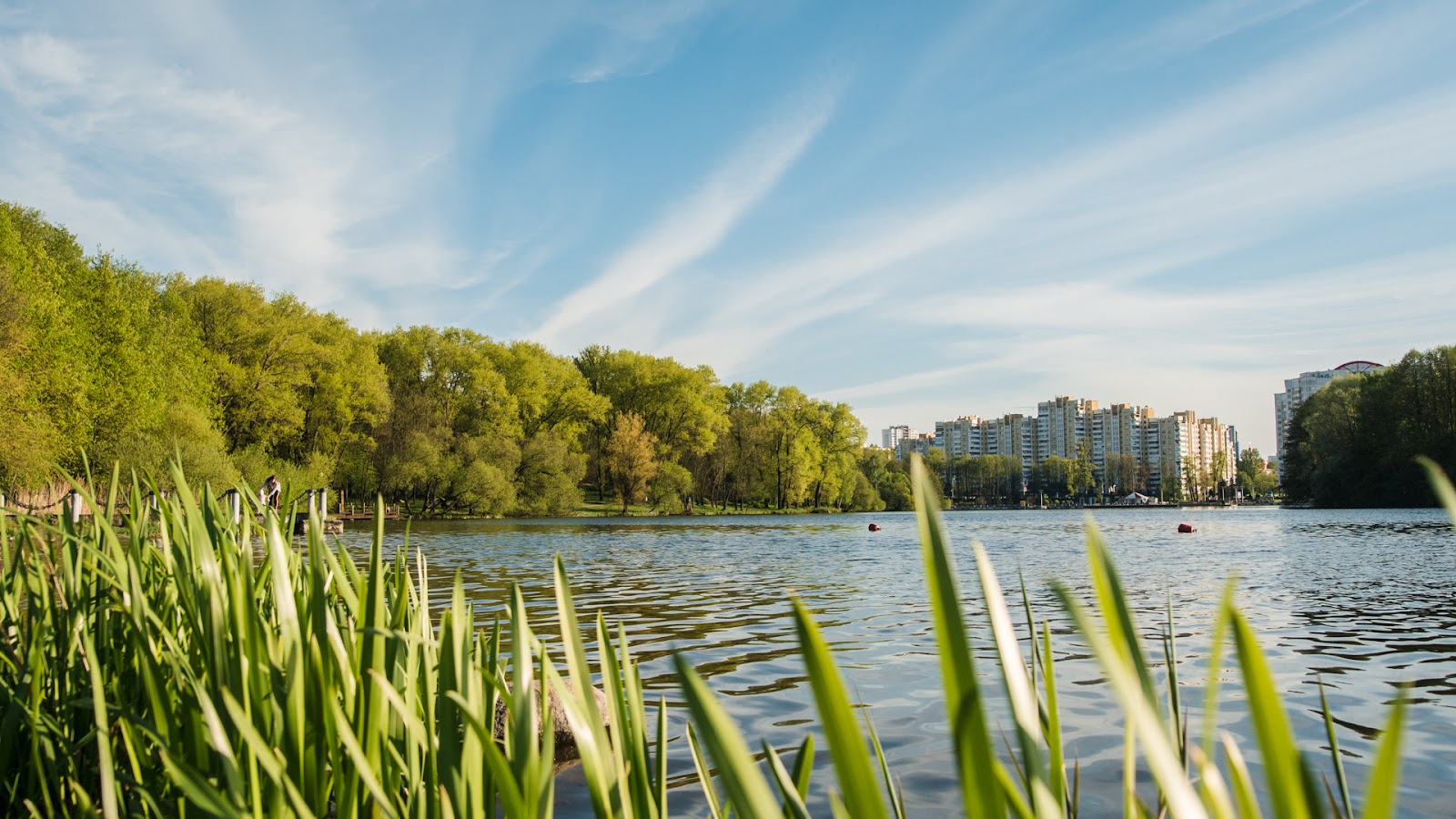 The reservoir is perfectly restored, as Nastya confessed. Along the whole lake there is a park with a lot of space for rest and sports. Everybody can find a place there: a place for work out and yoga, children's playgrounds with real stone castles, a beach equipped with sunbeds with a shower, wooden walkways - a favorite place for fishermen, many cafes and arbors. Also here is the first cycling place wh ere cyclists are always welcome. From here, comfortably sitting on the slopes of the pit of the lake, it is ideal to watch the sunset when the sun sets behind the houses.

In general, this route could be completed by the Upper City, but it was getting dark and it was necessary to turn off. By the way, those who are interested in history, we recommend to visit excursions to local attractions.

And finally, Nastia showed us the way to another volunteer project of the organization bikekitchen.by Open from 18:00 to 20:00. But the current schedule should always be checked on the site. This is a public garage wh ere you can service your iron horse. It is interesting, that next to the garage is the church of St. Roch. That's the contrast: you go on ordinary business and get into history. 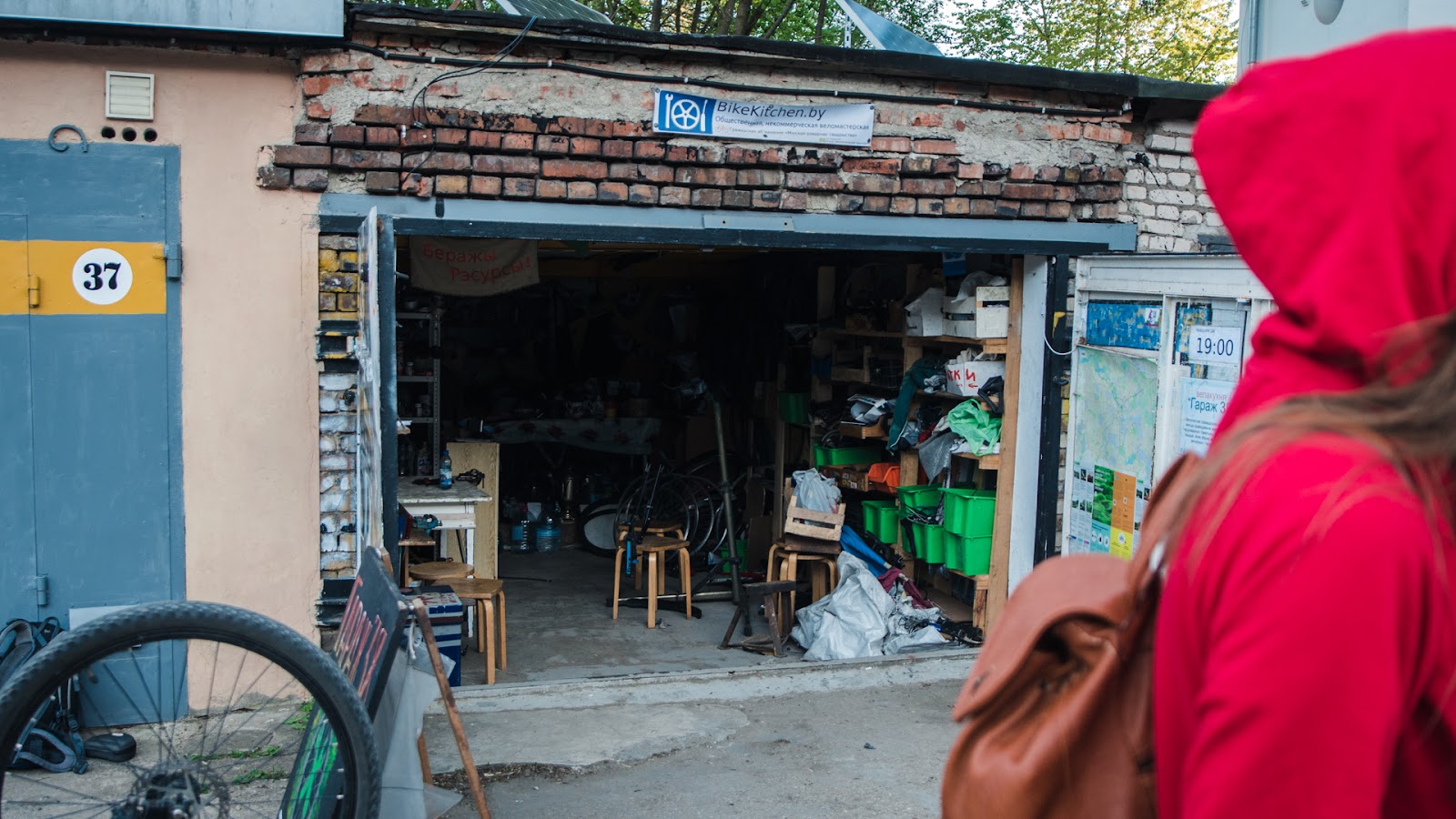 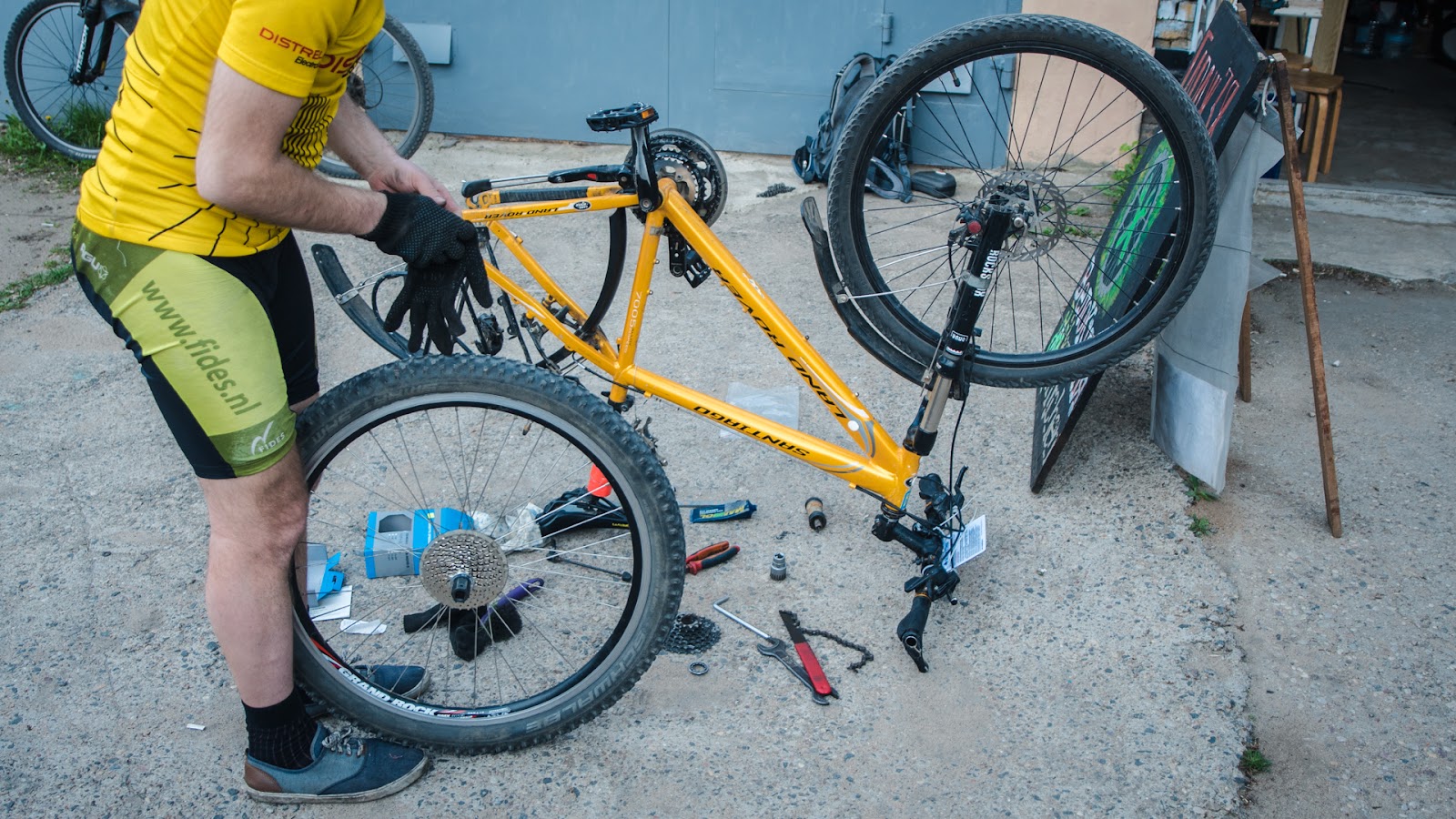 It was very exciting expedition! Thank you for this, Nastya!

I would like to congratulate our guide on her last birthday and wish her success and good luck.

As always, our route can be viewed on an interactive map. In the meantime, we are moving into the next city. All greased chain and inflated wheels!