Beautiful places of Grodno, which can be reached by bicycle

Beautiful places of Grodno, which can be reached by bicycle

VETLIVA travel guide continues cycling expeditions around the cities of Belarus. We have already passed through Gomel, Mogilev, Vitebsk and Minsk, and today we are in another city.

We are in Grodno, our expedition is accompanied by Ivan - a panoramic photographer, as well as a certified google photographer. Our guide likes to look for new places not only for photo sessions, but also just for himself. Ivan promised to show us cool places near the Polish border, so he asked to take a passport, because in the border zone one can’t travel without it. Ivan also warned us to take a bigger flash drive - in fact ahead of us there were so many beautiful and interesting places! We collected bicycles, pumped up the wheels and went on our adventure. 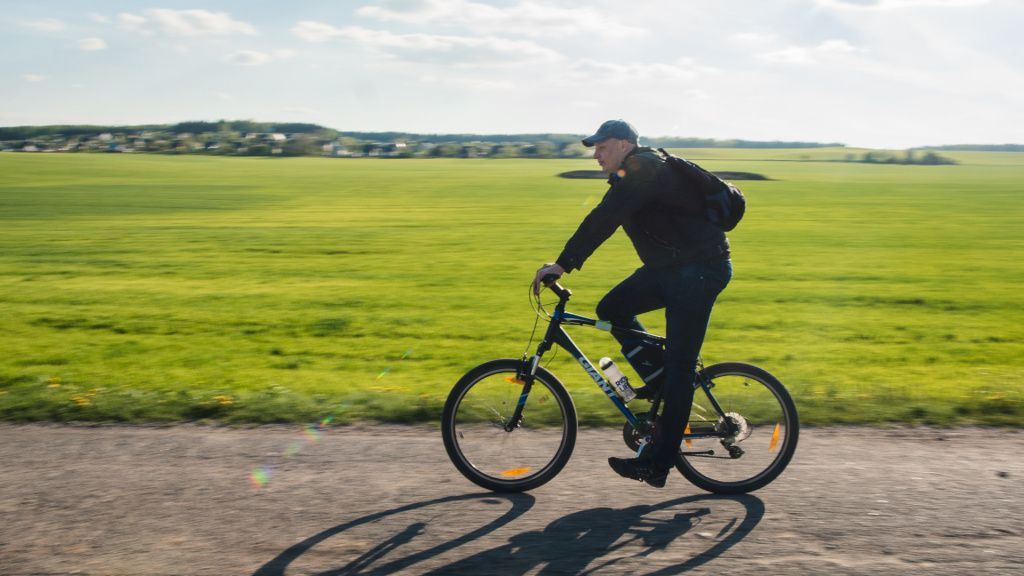 Ivan chooses places outside the city, because he does not like riding in the environment which is not intended for movement. He said that the tracks in Grodno were very small, the borders were not lowered which makes it very difficult to ride a bicycle. Therefore, we went beyond the city borders.

The distance to the first point was 7 kilometers. At this time we talked about cycling and life in Grodno as a whole. Ivan is from the district city, however, stayed in Grodno because of the atmosphere and culture of the city.

We were heading to Fort number 4. As Ivan said, this fort was the best which was preserved till now. In general, around Grodno at a distance of 10 kilometers from each other, there are 13 forts that were intended to protect the borders of the USSR. These concrete structures, dug into the ground, with a system of aisles and warehouses with weapons, played the role of defense posts. 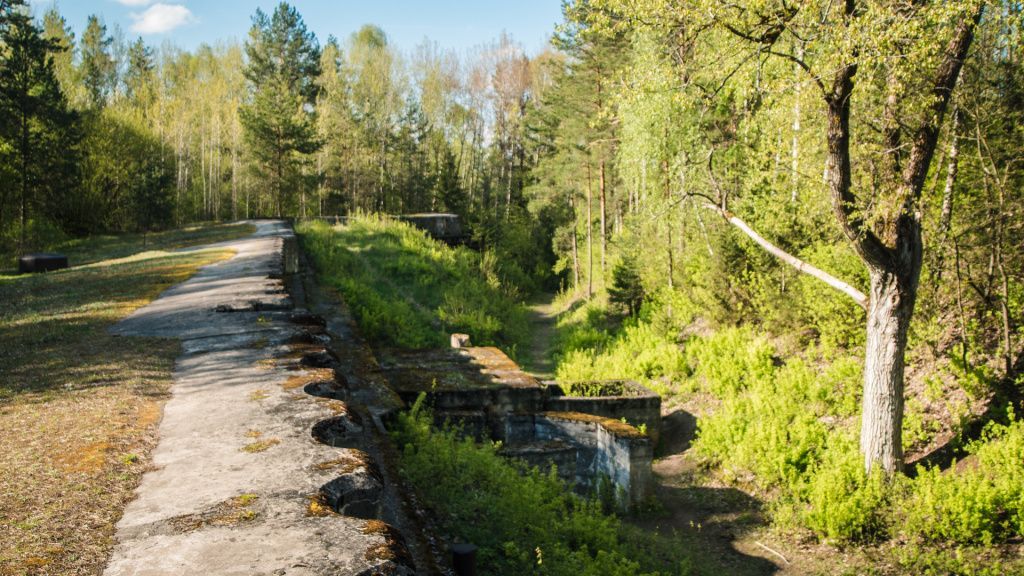 Since we were not going to go to the city center, we decided to ask about the favorite sights of Grodno, which must be visited. Ivan immediately remembered the Farny Church. To our joy, we got to the morning service and saw what it was like from the inside. In addition, he remembered the Lutheran church and the pedestrian street. In general, living long in a similar place, such sights are already treated as if it should be so and you do not notice it. About them, we'll talk later. And now let’s go back to the trip. 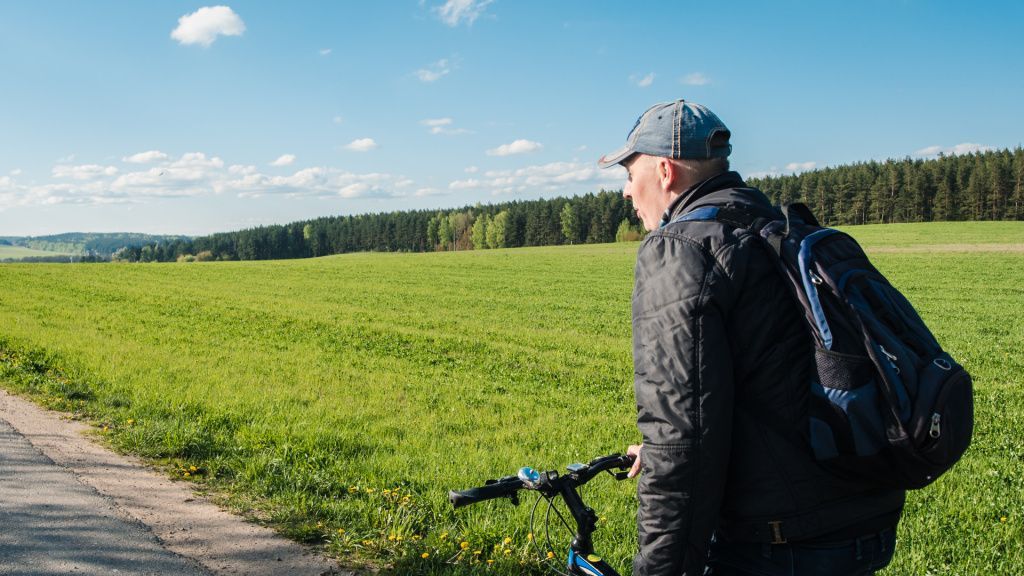 Near the forts there are located other buildings that provide work of these facilities. The fort is located on the hill: from one side – there is a forest, and from the other one - from Poland side, there used to be a field that is now overgrown and almost invisible. You can get to the fort by car, but we advise you to come here by bike. The air here is clean, there is a very beautiful forest around. Plus there are lifts that train you a little and help to keep the body up, as well as descents from which you can get a good roll down.

Just recently one could enter the fort and wander around it. However, now everything has changed: an iron door has been installed, all possible penetration points have been sealed and nobody can get inside anymore. However, nothing prevented us from examining the fort from the outside, and it seemed to us that it was already quite impressive and interesting. There are excavations for machine gunners and their ammunition, a massive iron pillbox with a loophole. 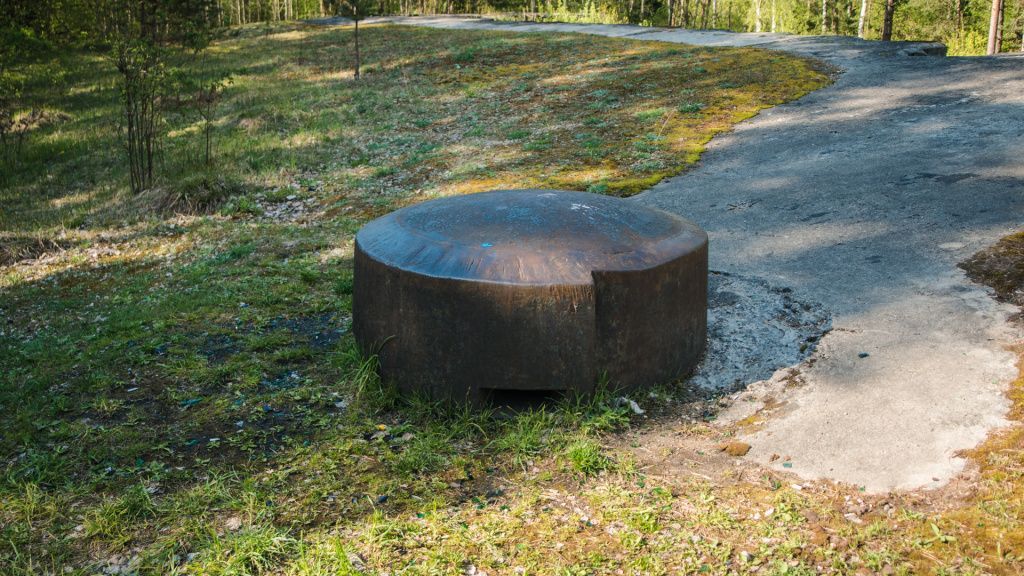 By the way, the pillbox survived two wars and preserved its excellent condition, although at one time it was subjected to massive bombing. 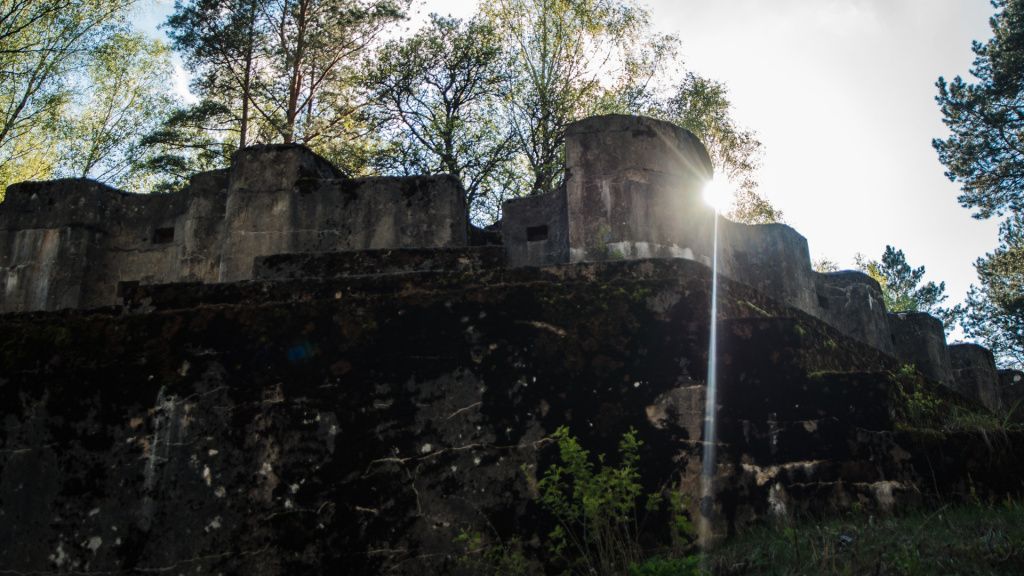 This fort was built as part of the fortifications of Grodno Fortress. Its erection began at the end of the XIX century. The IV-th fort covered the south-western front of the fortress. Now it is near the modern village of Strelchiki, Grodno district. Up to the state border with Poland there are about three kilometers. The battles near Grodno started in August 1915. Before the retreat of the Russian troops, there was issued an order to undermine all fortified positions of the fortress. Fortunately, Fort IV was not destroyed.

It's time to go on. While we were driving and talking, a car of border guards appeared on the road. They stopped us and asked us to present our passports. Ivan said that we are journalists and we travel around Belarus, border guards saw a bunch of cameras, believed and let us go further. We went to the fields, judging by the navigator, to the border there were 2 kilometers. And everywhere there was a field like a splash screen in Windows XP. Here, look at this yourself. 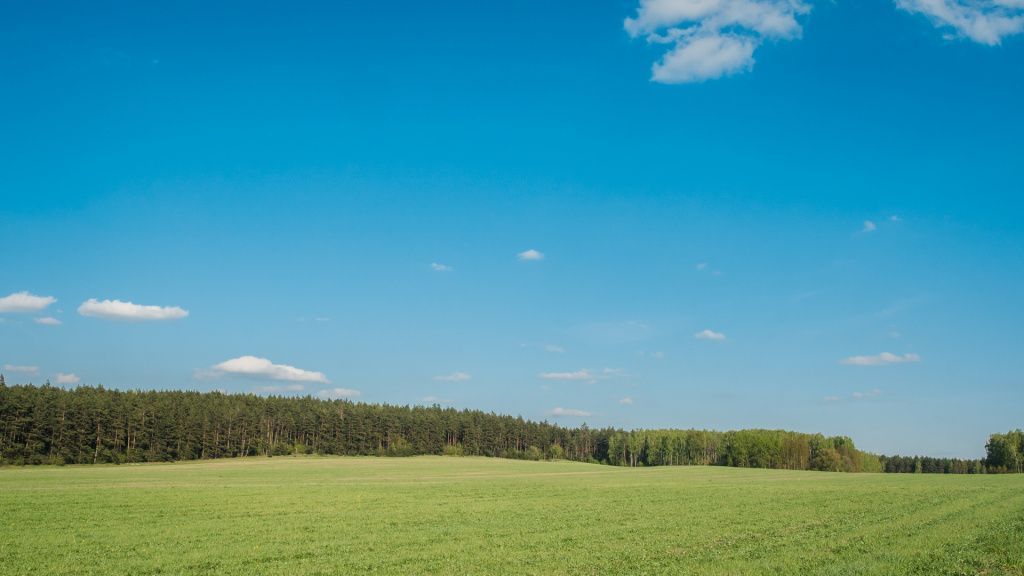 By the way, it was in Grodno where we finally got lucky with the weather. Unlike the gloomy weather in Mogilev or Vitebsk, as you remember from the previous articles, here it was a real summer.

We were going further: we had already passed about 10 kilometers. The sun began setting down, and we started to realize why Ivan had brought us here. After a couple of hours, the sun would set right in front of us, over the vast fields, and we would get perfect sunset shots.

An interesting fact: all the expeditions were organized by our guides according to their interests. Dima from Gomel loved tea and chose places ideal for creation and tea ceremonies in nature. Artem from Mogilev was also a photographer, because the places were chosen based on the game of light and shadow, which abound in the locations chosen by him. Nastya from Vitebsk is a person of subtle spiritual organization and highly spiritual personality, so she took us to churches and temples, along pedestrian streets and showed interesting graffiti. I wonder what route would you make? 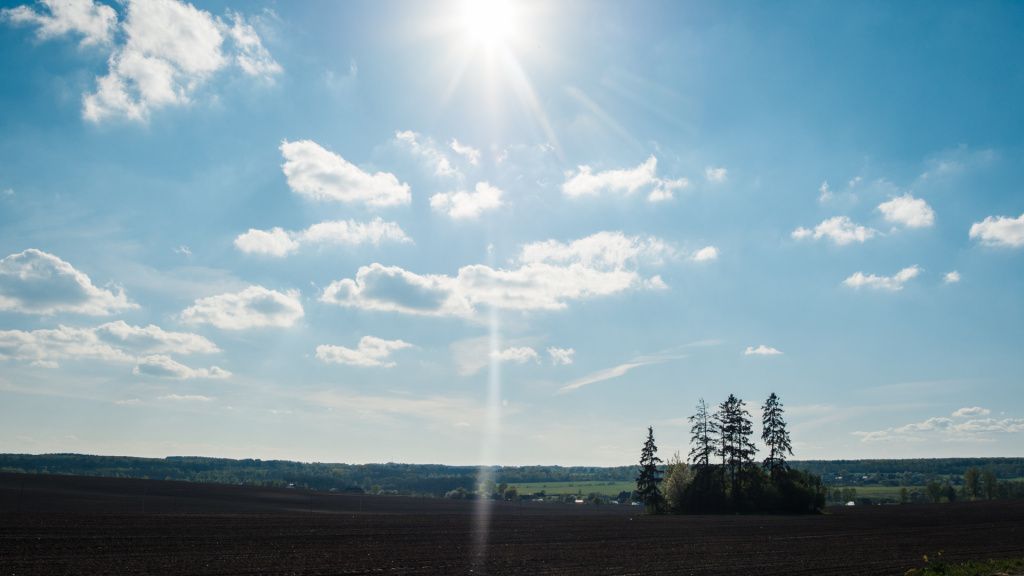 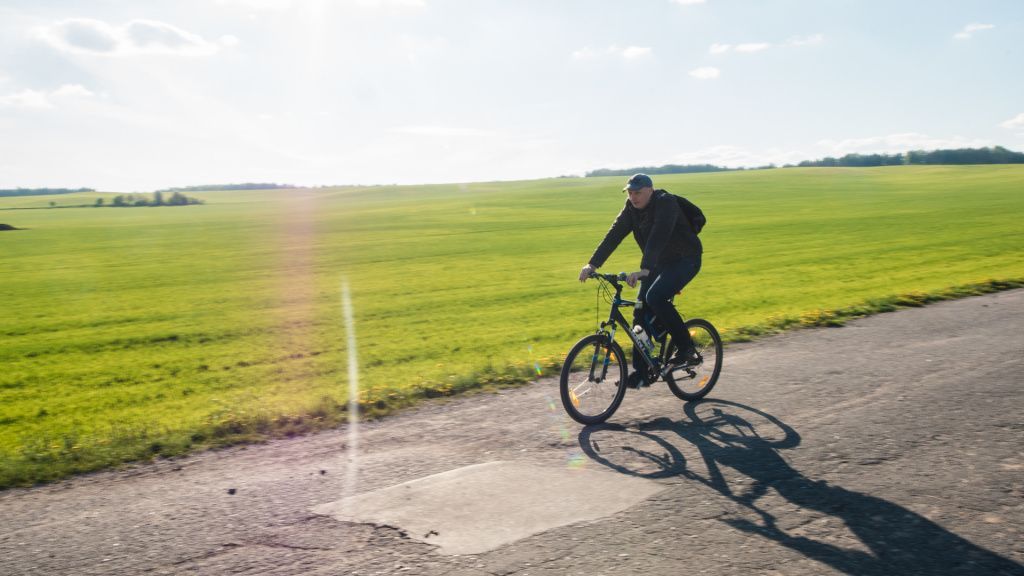 The fields were replaced by summer houses - and we were in a new place. This is an estate of Tyzengauz. Ivan often arranges meetings with fellow photographers here. And sometimes he comes here by bike. 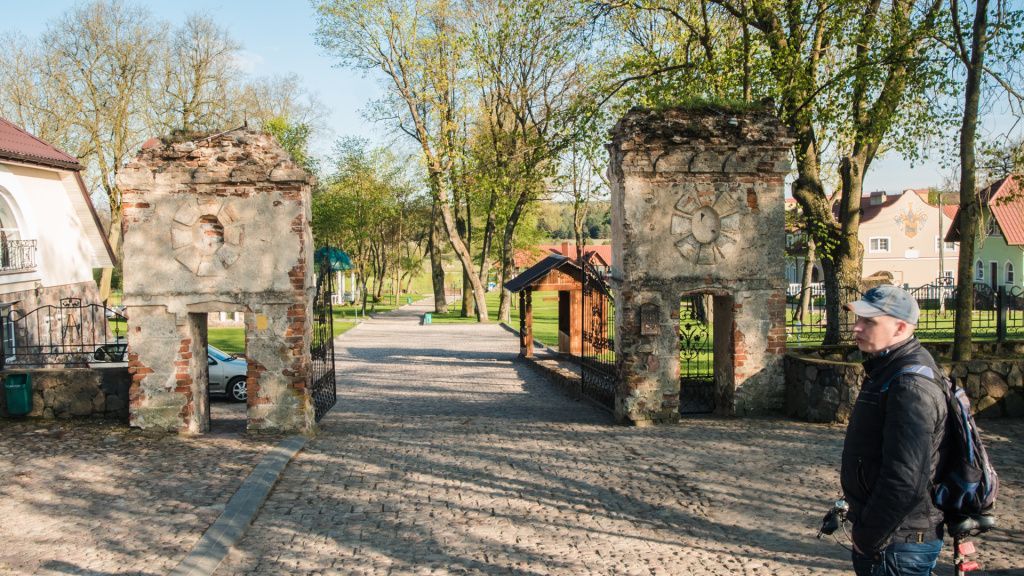 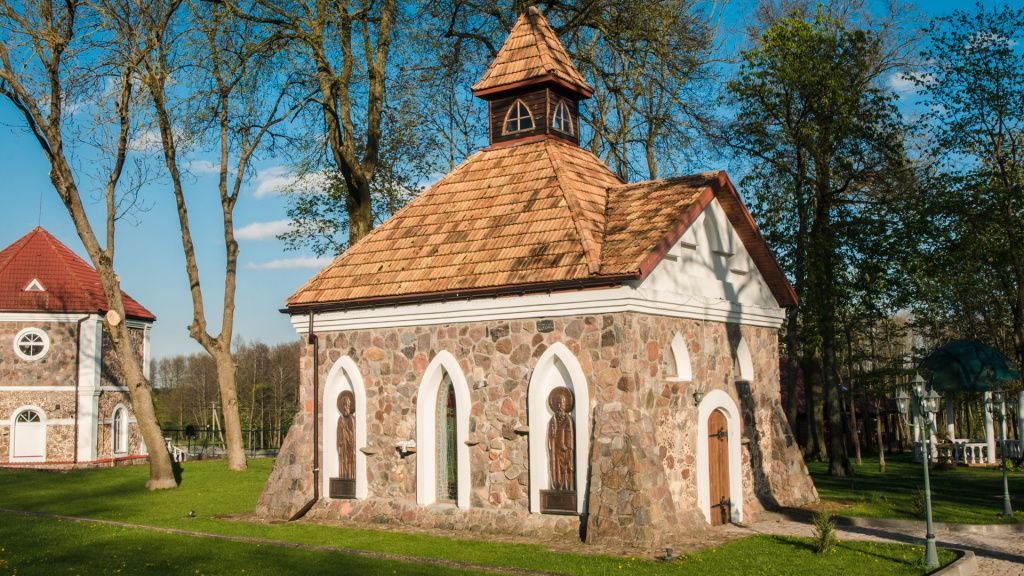 The peculiarity of this estate is that it is an ancient estate, which was built in the XVIth century. The estate became the most popular in the XVIIIth century, when the property belonged to Antonius Tyzengauz. He was a patron and an entrepreneur, he was engaged in the construction of numerous buildings. With his light hand, we can say, the heyday of the estate complex began. And the estate was named in his honor. 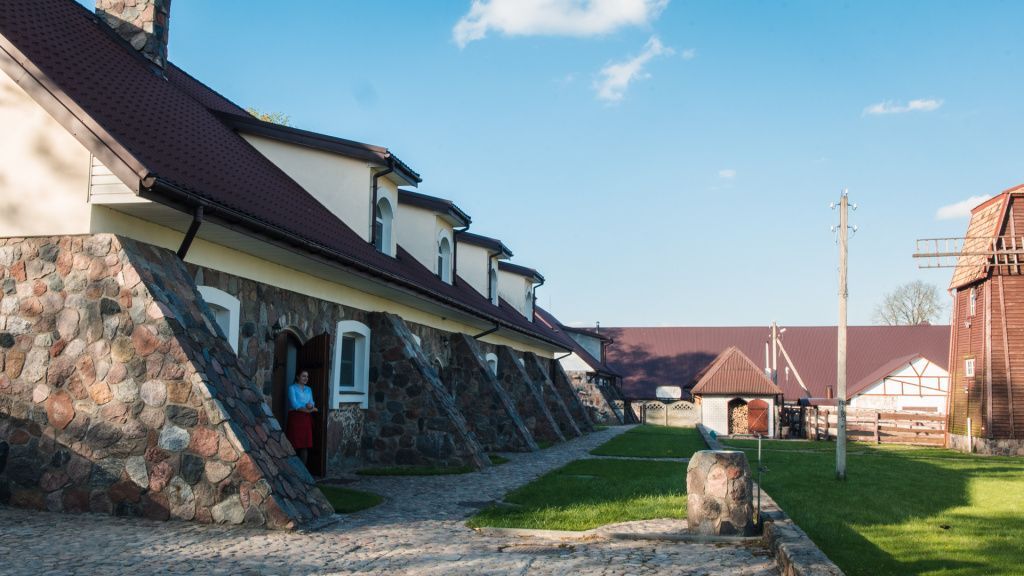 Before sunset there were still 2 hours, and we had to get to the city, until it got dark. On the way we saw a very well preserved water mill. As Ivan said, a lot of them have survived around the city, but only this one is in that condition. 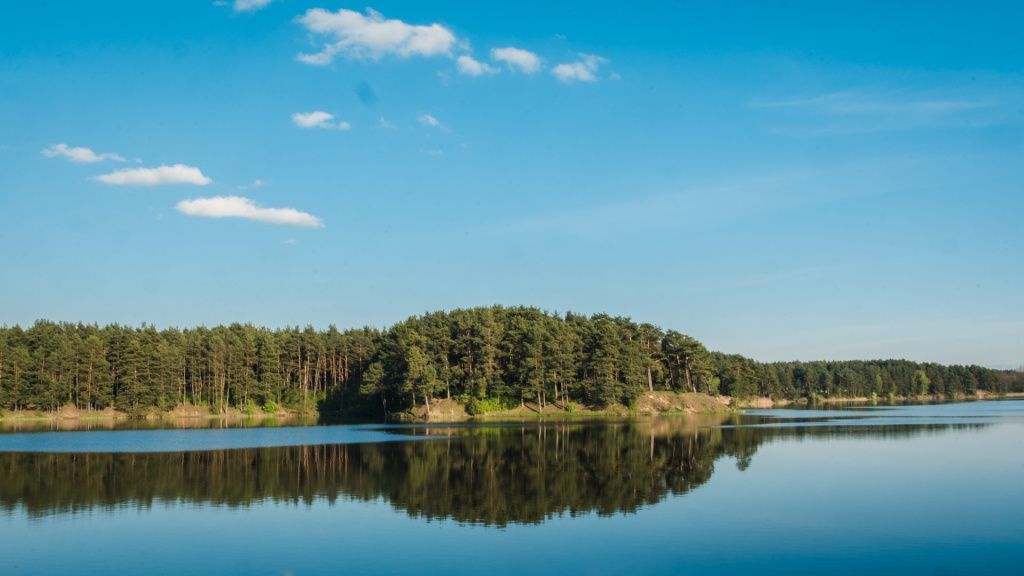 A little farther the Jubilee Lake was waiting for us, it is a favorite holiday destination of all Grodno residents. Here you can find beautiful sunset and ride, and just relax: near the forest and smooth paths, which offer a pleasant bike ride.

And now back to the sights that Ivan recommended to visit. 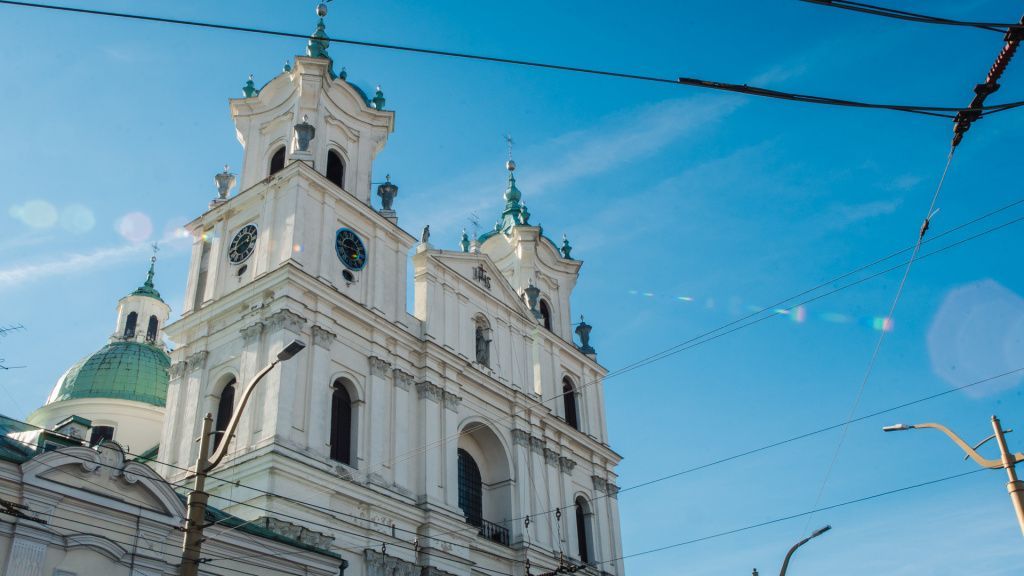 The church of St. Francis Xavier was founded in the XVIIth century by the Jesuits. This building was a part of the Jesuit monastery, that is why for a long time it was also called Jesuit. The construction of the church lasted for about 100 years, and the church itself has been in Grodno for over 300 years. Nothing has broken it over the years; it has remained in its original form. 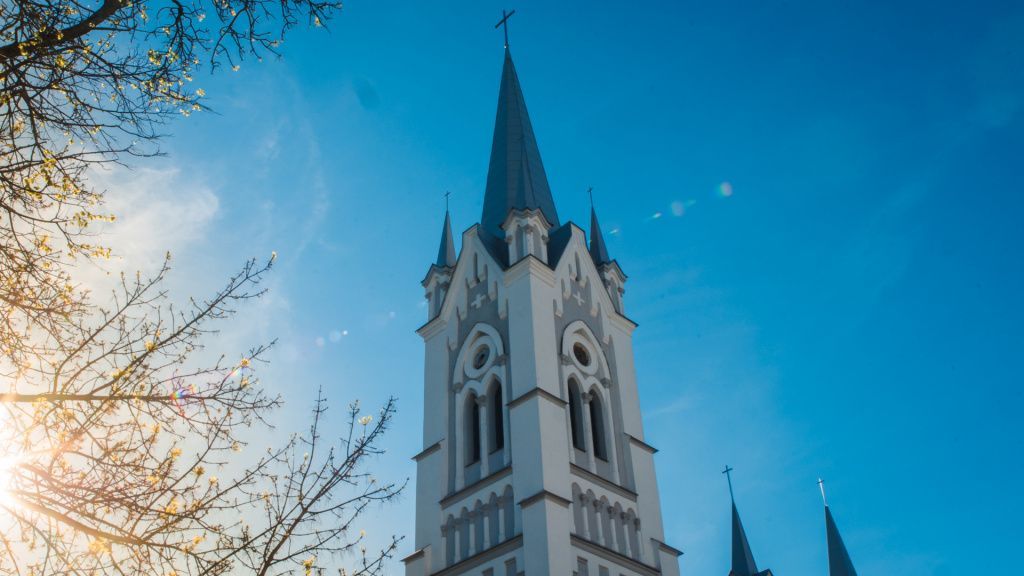 In 1793 a church appeared in Grodno - it is a church of the Lutheran faith. A decade earlier, Lutherans from Germany came to the city, at the invitation of the Grodno village host, they were supposed to open the royal manufactories here.

For worship services, parishioners rebuilt a three-story building of the former tavern in the church, which was given to the community by King Stanislaw August. Completely construction work was finished only in 1843. Near the church there appeared the first Lutheran cemetery, later - the bell tower with the clock. In the church the school of evangelists was opened.

The day has come to an end, and we need to say goodbye to you. See you in Brest, where Brest Fortress, the rowing channel and interesting guide Dima are waiting for you.

As always, the bike track expeditions can be found on our interactive map.