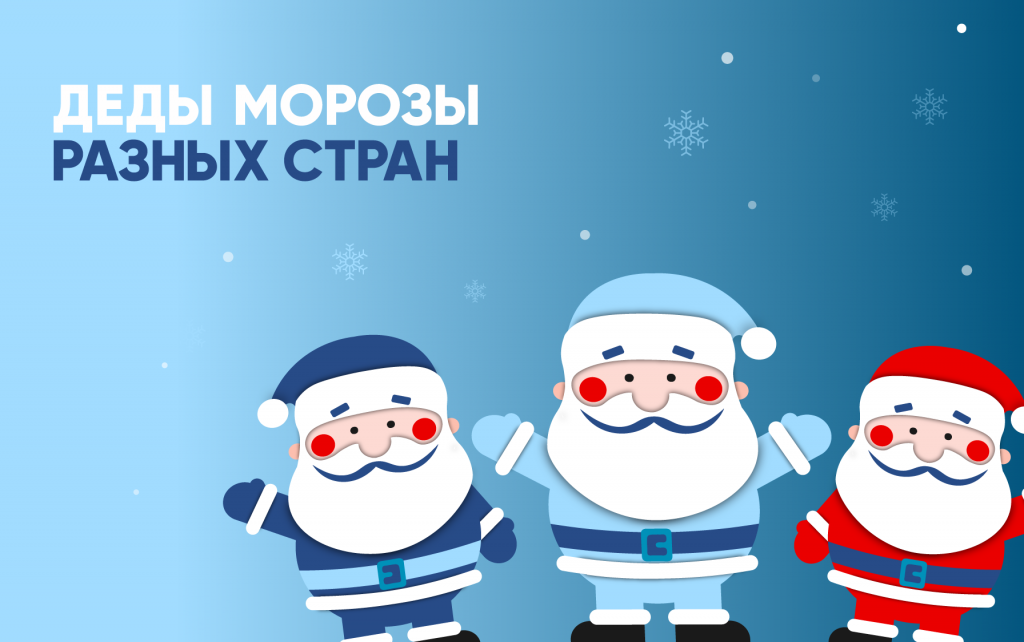 Last year we did an unprecedented thing: we confronted the real Grandfather Frost (or Ded Moroz how we call him) and Santa Claus. There were no winners, but it was very interesting to compare their abilities, clothes and ways to give gifts to children.

This year, VETLIVA goes further and invites Santas from around the world to the arena. Oji, Joulupukki, Mikulas and other New Year hosts with unusual names are waiting for you!

Santas around the world

Santa Clauses from different countries, although they differ, do not conflict with each other and adhere to the policy "everyone has their own country and their children, whom we must congratulate". But in Japan, a scandal between Segatsu-san and Oji-san has been raging for over a decade. The first is a more classic version of the Japanese wizard. On a festive night, he looks into the house and congratulates families on the New Year. Oji-san is a version of American Santa and, in addition to the best wishes, also brings gifts. And who would you rather believe in?

Another cute couple — this time of friends — lives in Italy. Babbo Natale is not much different from the usual Santa Claus. He also rides a sleigh with deer, wears red and gives out gifts. But he has even more requirements: you need to behave yourself all year, and then write a real report about it at the end of the year! No less interesting is the companion of Babbo, the witch Befana. This Madame loves to give coals to bad children as gifts, drink wine and take treats. If everything went well, Befana even washes the floor. Great guest!

Mikulas — this is the name of Santa Claus from the Czech Republic — especially distinguishes in terms of dividing children into good and bad. With him, on New Year's Eve, a real angel and a devil come out with long lists in their hands: the one with obedient and kind guys, the other with pranksters. The kind ones are given presents, the bad ones get coals. Nevertheless, they can be exchanged for treasured sweets and toys, if you ask for forgiveness and tell a poem. But knowing the love of modern children for mystical series and fantasy, they are more willing to get acquainted with the dark assistant of Mikulas.

Wanna take a look at Santa Cattleman? A Mongolian grandfather named Uvlin Uvgun is responsible for the New Year in the country along with his assistants: a snow girl and a New Year boy. Uvlin Uvgun himself wears shepherd’s accessories and a whip, puts on a fur hat and a fur coat and carefully monitors the celebration to be perfect.

Here we are discussing what Santas are in different countries, and in the meantime, Ded Moroz’s Austrian colleague Weihnachtsmann is hiding the terrible truth! In fact, this is not even a magician or a keeper of winter, it is a real evil spirit. About 250 years ago, the Austrians believed that it was Weihnachtsmann who abducted children from parental homes. However, wandering into the house of one chimney sweep with unclean thoughts, he ran into an unexpected rival. As a result, the evil spirit was hacked by a broom, thoughts were wiped to crystal purity, and a job was found for the former kidnapper. Now Weihnachtsmann gives children gifts and gingerbread in the form of a chimney sweep. Doubtful treats, aren’t they?

A local festive grandfather by the name of Joulupukki would hardly have been delighted to find out that his name translates as "Christmas goat". However, there is nothing offensive in this name. The tradition of dressing up as a goat, walking from house to house, singing songs and giving gifts appeared in the late Middle Ages, but now Joulupukki walks in completely human white and red clothes. With the work of a good storyteller and gift giver, he is assisted by numerous gnomes and a wife named Muori.

VETLIVA says: didn't you find the Finnish tradition familiar? Of course, these are our Carols! By the way, they are still very popular with Belarusians, so if you were always interested in watching this or even participating, feel free to book New Year’s lodging. We assure you: you will also drop in with songs and... a goat.

French Pere Noel is very similar to the British Santa, Father Christmas, and he is generally a charm. Interestingly, in addition to the good grandfather with a bag of gifts and a snow-white beard, the French have another New Year character. Don Chaland wears black, lives in the Cote d'Azur region and carries the real tools for torture. In order not to fall for one of them, you need to sing a Christmas song for Don, and then instead of torment he will give a gift. So, if you are suddenly planning to move to France, choose the North: there you will be met by Pere Noel without tools.

Santas are different: white, yellow, red. And sometimes they wear straw hats, such as Olentzero. He comes to the children on December, 28, has fun with them, and sometimes even gives them a taste of wine from his flask. In addition to him, the Spaniards have Papa Noel — quite a classic Santa with helpers-magicians who come with gifts to the children for Christmas. In short, the Spaniards get twice as much holiday!

The Hungarian New Year’s grandfather’s name is Saint Sylvester, and this character knows how to announce his arrival. If Santa gives out gifts late at night and in secret from children, then Sylvester walks the streets on the night of December, 31 to January, 1 and blows into the pipe. In order for Hungarian children to receive their gift, they must lean out of the windows and blow it back. The noise and din are deafening, but at the same time everyone has fun, and the atmosphere of the holiday from this only becomes brighter.

VETLIVA says: if Santa Claus from Hungary turned out to be the loudest on this list, then Panama took the honorable place of the noise king in our top of unusual New Year's traditions of different countries. Want to find out why, and at the same time, get a guide to attracting luck?

How many new names and how little time to get to know everyone! But why the fabulous New Year characters are so different from each other? They all wear beautiful clothes, give children gifts (albeit sometimes with reservations) and mark the beginning of the holiday with their appearance. So it doesn’t matter who you believe in — Santa Claus, Joulupukki or Saint Sylvester. The main thing is that they simply always believe in the New Year miracle.

Like this article, share it with your friends, read our Blog and learn about the new with VETLIVA!